Belongings is a miniature music theatre piece for tenor and cello, inspired by items of luggage carried by railway passengers.

It premiered on the Caledonian Sleeper as the train left Aberdeen en route to Euston station on the 24th July 2017, the eve of our 10th Anniversary Festival. It was then performed throughout the Festival in our foyers, on the streets and at RADA Studios.

That Autumn on the 9th November it made the journey north to soundfestival Aberdeen performing again on the Caldedonian Sleeper. It had a further two performances during the Festival at The Royal Deeside Railway and Newton Dee.

Belongings was revived on the 29th November 2019 at an Opera Hub Inquiries in Kent.

You can watch a performance below and hear more about its unconventional premiere, as reported by the BBC, on our News page HERE. 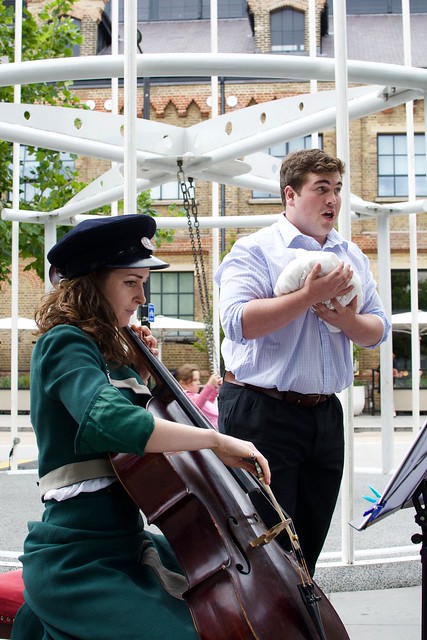 Co-commissioned and co-produced by Tête à Tête and sound

Co-commissioned and co-produced by Tête à Tête and sound

Bill Bankes-Jones Bill has been directing plays and operas for 30 years. After the ITV Regional Young Directors’ Scheme and work at RNT, RSC, ROH and ENO, he founded Tête à Tête in 1997. They’ve been exploring new futures for opera ever since. Plans include an arena production of Pagliacci for Scottish Opera.

Sarah Booth Sarah studied Drama at the University of Exeter and trained on the Motley Theatre Design Course. Designs for Tête à Tête include Crime & Punishment and Hogarth’s stages at Britten Theatre, People Watch, April and the Amazon and various ‘Pop up’ operas for the Festival. Sarah also runs THE ATTIC costume store.

Samuel Bordoli Samuel is establishing a reputation as one of the foremost composers of his generation. His varied output continues to explore relationships between architecture, music, literature and theatre. Recent commissions include The Great Silence for the choirs of Her Majesty’s Chapel Royal and Live Music Sculpture 4, a site specific work for City Hall. Samuel took up the post of Composer-in-Residence at Scottish Opera in 2017.

Timothy Burke Timothy studied at Exeter College, Oxford, the GSMD and the National Opera Studio before joining the Jette Parker Young Artists Programme at the Royal Opera House. Recently, he has conducted for ETO, Opera North, Scottish Opera, WNO and the Royal Northern Sinfonia, as well as Les enfants terribles for the Royal Ballet.

Zosia Jagodzinska Since Graduated from the University of Oxford (BA Music) and Guildhall School of Music and Drama (Solo Cello Performance). Both a soloist and chamber musician she is Principal Cellist in contemporary jazz/crossover ensembles ‘The Dissolute Society’ &’Engines Orchestra’ (Winners of the Parliamentary Jazz Ensemble of the Year). Her own compositions have been broadcast on Radio 3.

Robert Lewis is a 20 year old tenor from Mid Wales who has recently completed his third year on the B Mus. Vocal Studies course at Guildhall School of Music and Drama in London. Robert is a winner of the Osborne Roberts Blue Riband and the W Towyn Roberts scholarships at the National Eisteddfod of Wales resulting in a solo performance at the North American Festival of Wales held in Canada in September 2016. Most recently, Robert was an Alvarez young artist at Garsington Opera in July 2017.