In April 2012, the SANDMAN – a horror operetta based on ETA Hoffman’s short story – was performed at the Guildhall School of Music and Drama, directed by Stuart Barker. Whilst collaborating on this project, Samantha (words), Daniel (sound), Osnat (production) and Na’ama (music) found that there was a lot more to Hoffman’s dark text than could be effectively realised in a short operetta. BLACK SAND sees the development and growth of their original ideas into an opera.

Imagine the time right before you fall asleep, when you’re alone and your mind plays tricks on you. It is not what is seen, but what is heard: an opera singer’s voice electronically enhanced, an upbeat pop song transformed into a sadistic lullaby, a rock n’ roll passage ripped out of context giving us the uncanny feeling that everything is not quite right. BLACK SAND is set in a small suburban university town in 1950’s America; the kind of place where every house has a front lawn and everyone knows their neighbour’s business, where there are prep rallies and a pharmacy where teenagers gather on Friday nights to drink milk-­‐shakes and coke-­‐floats. An idyllic place where people are obsessed with being normal, being appropriate. Nathanael is an outsider in this town. Since his parents’ death he has been haunted by night terrors, by the Sandman. His biggest fear is to lose his mind and, in turn, his true love, Olympia – the most perfect American “teen-­‐dream” girlfriend. Terrified and determined to keep his mind, Nathanael decides his only defence is to sleep forever. BLACK SAND is a horror opera about a man so reluctant to confront his fear that it destroys him and everything he loves. 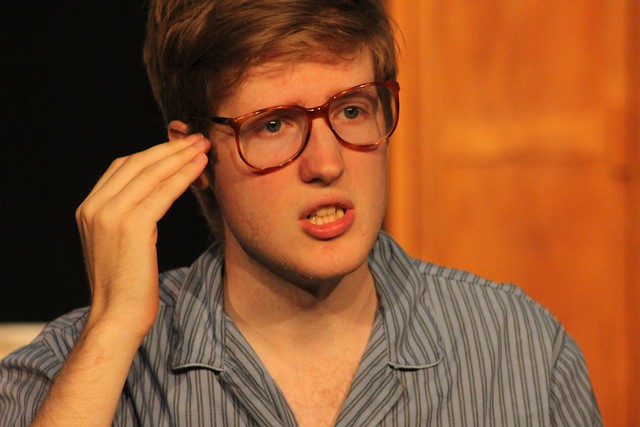 Na’ama Zisser, originally from Israel, is studying for a Masters in Composition at the RCM, under Mark-­‐Anthony Turnage. In the past year, her music has been performed at Sadler’s Wells, Brighton Dome, ROH2, Barbican Cinema, the Roundhouse, and Aldeburgh Music festival. She recently took part in the Sound & Music Portfolio scheme, Britten-­‐Pears Young Artist Program and ROH/ELD Street Stories: Dance Collaborations.

Samantha Newton graduated from CSM in Performance Design, and the AFI in Directing. She is a full-­‐time screenwriter. Her films have been played in festivals worldwide, including the Berlinale. Her recent work includes a spy thriller for producer Hannah Leader (Gosford Park), and a Sci-­‐Fi romance for Oscar-­‐Nominated producer Daniel Dreifuss (NO).

Stuart Barker has a long association with British Youth Opera; his productions for the company include Judith Weir’s A Night at the Chinese Opera and Stephen Oliver’s Euridice. He has directed twenty productions as Artistic Director of The Minotaur Music Theatre. Future plans include the launch of Third Hand – a new puppet opera company. www.stuartbarker.com

Isobel Power Smith is currently training at RADA, having completed a degree in English Literature at Warwick University. Previous productions include Hansel and Gretel and The Magic Flute at the Warwick Arts Centre. Isobel has also created set and costume pieces for events at The National Gallery and Shakespeare’s Globe.

Suzanne Burlton is studying Theatre Costume at RADA, having previously immersed herself in student theatre at Cambridge. She most recently costumed a production of Much Ado About Nothing, which toured to local schools, and The Square Egg (an improvised Edwardian satire). She is currently working on an ecclesiastical textile conservation project.

Adam Dallman recently graduated from the Guildhall School of Music and Drama. He has worked as a Designer on productions including Little Shop of Horrors, Wind in the Willows, and Joseph and the Amazing Technicolor Dream Coat. He has also worked on several productions as a stage and electrics crew member.

Osnat Koblenz recently graduated from the Technical Theatre department at the Guildhall School of Music and Drama, where she specialised in Stage Management. She has independently produced theatre events and performances, and has worked at the Edinburgh Fringe Festival, and was an Assistant Stage Manager in the 2012 London Olympics and Paralympics Opening and Closing Ceremonies.

Daniel Grossman is a musician, programmer and media artist. He studied at TheRoyal Conservatory (The Hague), and received an MA in Sound Arts from the University of the Arts (London). His work recently featured at the Barbican Silent Film Festival, Resonance.FM, Folly for a Flyover, Silk Street Theatre and the Nursery Gallery.

Jack Smith is a graduate of the Royal Welsh College of Music & Drama and Trinity College of Music. He is highly active both as Conductor and Instrumentalist (with a wide variety of ensembles), performing music from the 16th Century through to the 21st, as well as free improvisation. www.jdsmusic.co.uk

After graduating in Music from Cardiff University, James Hall studied at the Royal College of Music, with Eiddwen Harrhy. Previous roles include: First Spirit Dido and Aeneas, Oronte Riccardo Primo, Military Governor A Night at the Chinese Opera, and Hamlet (cover) in David Bruce’s The Firework Maker’s Daughter.

Soprano Caroline Kennedy graduated from the RSAMD’s Alexander Gibson Opera School. This year she covered the roles of The Dew Fairy Hansel and Gretel, Hilde Lady from the Sea, and Papagena The Magic Flute (Scottish Opera). She is currently singing Giannetta The Elixir of Love (Opera Upclose), as well as covering the role of Cleonis/Love Medea (ENO).

Australian Soprano Alexandra Mathew recently completed a postgraduate singing course at the Royal College of Music (where she studied with Sally Burgess and Stephen Wilder) and studies in Musicology at the University of Melbourne. Recent performances include the RCMIOS production ofLa Vie Parisienne. She also recently sung in a new opera workshop with Stephen Fry.

Rose Stachniewska studied singing at the University of Sussex, with Sarah Pring. She is now studying for a vocal Masters at the Royal College of Music, with Rosa Mannion. Recent engagements include: opera scenes (RCM), Helena A Midsummer Night’s Dream and Flora/semi chorus in Debussy’s Nocturnes.