This performance is a mid-­‐way point on an exploratory journey in which the composer/performer takes influence from several theatre practitioners and begins to mould both a physical score and notated musical score through vocal and physical improvisation using Artaud’s The Spurt of Blood as a springboard. The piece is very much in it’s research stage so feedback is very much appreciated! 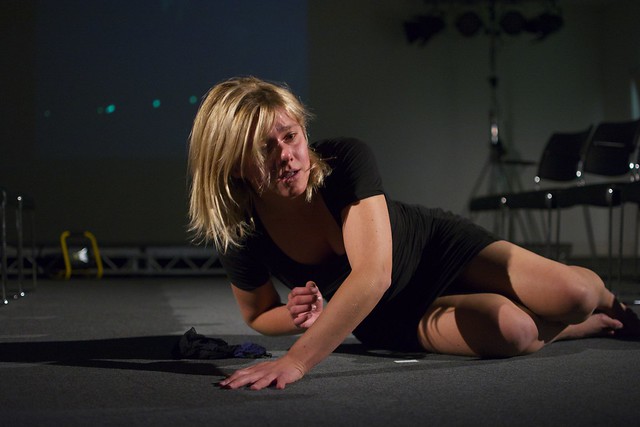 recipient of the Stephen Oliver Award for Opera two times, and a Juror’s Choice at Darmstadt International New Music Festival. She has recently written several large-­‐scale music theatre works including a quadruple wind concerto, Dance of Death, and multi-­‐disciplinary multimedia work Whitworth Letters – for the reopening of the Whitworth Art Gallery. Laura is also a mezzo-­‐soprano having had several works written for her, most a week for two months. She has completed several residencies includingComposer-­‐in-­‐Residence at both the Banff Centre and Manchester Camerata. Laura is also the Artistic Director of SizeZero Opera, a company specialising in the commissioning and production of bold innovative chamber opera from emerging international composers. She is a Professor of Composition at the Guildhall School of Music and Drama andrecently joined the Composition Faculty at the RNCM. Future commissions include an opera with Edward Bond premiering at the Arcola Theatre

in August 2016, a twenty-­‐minute music theatre saxophone quartet for the Ferio Quartet and a new community opera working with Alasdair Middleton for the reopening of the Sutton Theatres in October 2015.

Sam Redway is an actor and theatre maker with a broad range of experience from choral physical theatre and Grotowskian Via Negativa to Checkov and Shakespeare. He is a recent masters graduate from RADA’s Theatre Lab course and has devised with many theatre companies since 2007. He is joint Artistic Director of Knaive Theatre, with whom he performed as Osama Bin Laden inBin Laden The One Man Show, and is currently working with Familia de la Noche on The Very Grey Matter Of Edward Blank. Sam has just completed the r&d phase of an Arts Council funded project: A Dead Tree Gies No Shelter. He has recently collaborated with with Manchester Camerata, Theatre Ad Infinitum, Hiccup Theatre, Smoking Apples and The Awake Ensemble.

Carlotta Merazi is an independent video and film maker currently based in London. The choice of film as her primary medium is the result of an extensive involvement in the arts from a young age. After training in ballet and contemporary dance in Italy and studying fine art and design in New York, she settled in London, in the pursuit of a discipline that she interprets as the most collaborative and generous form of art.After graduating from MET film school, Carlotta worked within the camera department on a variety of feature films, commercials and music promos, refining her skills and understanding of the industry. In 2014, she founded a small production company, allowing her to focus her energy on producing/working on projects that are most in line with her core artistic beliefs. Thus far, in the main, she has created work for the new music and opera scene in London and across the UK.