An opera in one scene

This year, Max returns to the Tête à Tête: The Opera Festival, in collaboration with James Young and Arcomis Live!, with Brunch – a tentatively labelled ‘pop-up ‘opera’’ that will appear spontaneously throughout the festival (with the exception of one advertised performance). The motivation behind the creation of this work was to make a sort of opera that at its centre had something funny and ‘everyday’ that people are instantly able to connect to. In Brunch’s case it’s a juicy, bitchy conversation between three women in a café, and we are all invited to eavesdrop. There are additional comedic elements and characters, but I won’t include spo ilers here. Suffice to say that it is a multi-dimensional work that must be experienced directly and not through written description! Rather than being attended by choice, Brunch is brought directly to people, unadvertised and unlabeled, enabling unsuspecting audience members to develop emotional connections with the characters and material in a process that is free from possible prejudices associated with any contextualizing labels. The piece then becomes part of the unplanned fabric of that day – an unexpected trip to the theatre, but where the theatre is spontaneously made from your surroundings… All free of charge and with no expectations – just a hope that the performance entertains, inspires interest, and is enjoyed.

The score for Brunch is available at http://arcomis.com/catalogue as part of the Arcomis online publishing system.

A coup de banalité: three women meet over brunch to discuss work woes and rocky relationships, unaware that anyone is listening in… 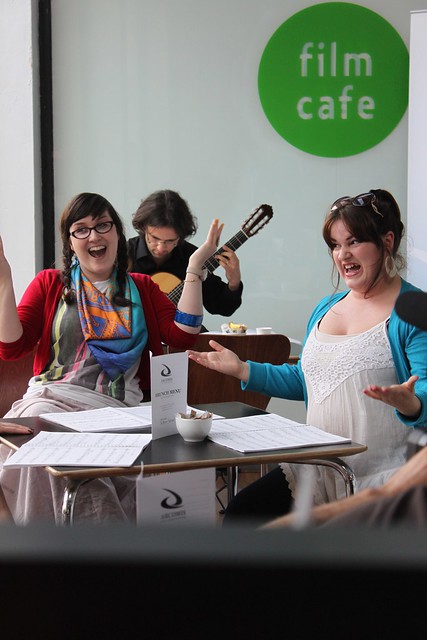 Max Charles Davies studied at the RCM as a Foundation Scholar, and as a postgraduate at Cardiff University with Anthony Powers and Judith Weir. He was an SPNM shortlisted composer from 2006-2009. His music has been performed by the BBC’s Symphony Orchestra and NOW, and at the Cheltenham Festival, amongst others. He is pianist with The Butler in the Billiard Room.

Carl Herring graduated from the RAM with first class honours and the Julian Bream Prize under his belt, Carl has performed worldwide and give solo performances in venues such as the Sage, Gateshead and King’s Place, London. He has performed as concerto soloist with the Northern Sinfonia and has three critically acclaimed solo albums to his name.

Catrine Kirkman graduated with a Masters from GSMD and continues to study with Jessica Cash. Catrine performed the solo vocalise in a world premiere by Benjamin Ellin at the opening catwalk show of London Fashion Week 2010. She sings the role of Inn Hostess on the Naxos recording of Edward German’s Tom Jones, and plays the title role in forthcoming cinema release In Love with Alma Cogan.

Rosie Strobel grew up in Liverpool, moved to London, trained at TCM and now lives in Brockley. Rosie sang lead vocals for the London Breakbeat Orchestra touring the UK and perfoming live on Radio 1. Recently, Rosie has been performing a lot of Gilbert and Sullivan (nominated for ‘best female performance’ by Off West End for Little Buttercup in Charles Court Opera’s HMS Pinafore) and is subsequently delighted to be making her first appearance at Tête à Tête: The Opera Festival.