Amazonia is a music theatre company that creates and produces radical new works and collaborates with leading musicians, choreographers and performers. Amazonia offers popular, potent and topical new works – always striving for excellence, combining the force of political fact with poetic imagination. Our style encompasses many disciplines, with a commitment to new work at the highest possible standard.

THE CHOKER – loosely based on Guy de Maupassant’s The Necklace – is a witty, savage tale for our time.

Martha, our heroine’s dull, stable life with fireman and husband, Lenny is turned on its head when she meets Jean – a seductive woman with a hedonistic streak. Jean’s influence – alongside that of her glamorous husband, Monty – promises Martha a new way of living: shopping trips, a ball at the Dorchester, the loan of a diamond necklace – luxury Martha lusts after. Euphoric shopping trips are followed by mounting credit card debts and then, Martha loses the necklace. Like Cinderella in reverse, the glittering ball at the Dorchester now a distant memory, Martha is reduced to working in nightmarish conditions in a meat-­‐packing factory and strip club. Their final meeting brings the opera to a shocking conclusion. This multi-­‐disciplinary opera offers a cast of fourteen, three dynamic principal singers, seven dancers, one actorand a mime – whose presence and force lift the drama to magical heights. 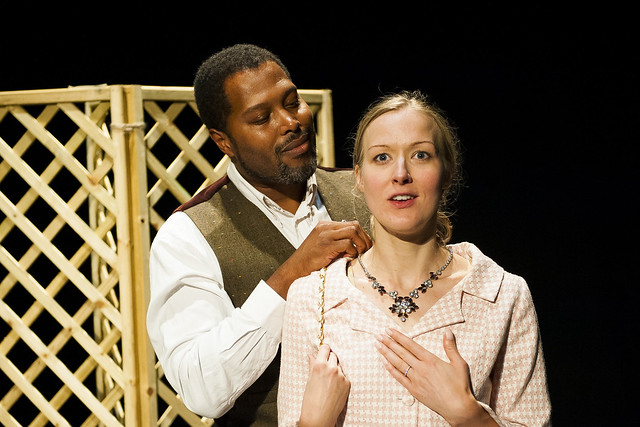 Jude Alderson is Artistic Director of Amazonia. An award-­‐winning writer, director, composer and co-­‐founder of the legendary Sadista Sisters, she has, for the last ten years, produced cutting edge work for this company. Jude’s work in theatre and film spans over thirty years. Her plays include: Belonging (LWT award) The People’s Opera (Year of the Artist Award) and Itinerants (Peggy Ramsay Award). Film includes: Rachel and the Roarettes.

Nola Rae MBE trained at the Royal Ballet School and with Marceau Marceau, is one of Britain’s most celebrated visual performers and has performed in sixty-­‐eight countries, to date. She was movement and clown director for Rolando Villazon’s production of Wether (Lyon Opera) and Elisir da Amore (Baden Baden) and will join him again for Viva La Mamma (Vienna Volksoper) in December.

Jonathan Lee has performed at prestigious venues including the Purcell Room, Southbank Centre, the Arts Club and Wigmore Hall. He studies the piano with Caroline Palmer and Joan Havill at the Guildhall School of Music& Drama. He is the repetiteur on their musical theatre productions, under the direction of Steven Edis.

Julia Palmer-­‐Price cross-­‐over cellist has been living and composing in the Malvern Hills since playing Jimi Hendrix with Nigel Kennedy in 1999 – the pinnacle of a colourful career that began in London in the mid-­‐eighties, when Julia stepped out of music college into the Sadista Sisters (most memorably playing her cello on a horse in an eighteenth-­‐century costume and wig).

Lucie Regan works with All Terrain Theatre and Dirty Market Theatre (DMT). She is currently collaborating on DMT’s new show, Mrs Horton’s Finger and is assisting Director Georgina Sowerby on This Small Thing. She is also a Researcher for TV and various writers.

Sheriya Clement-­‐Pascall has just graduated from the American Musical Theatre Academy. She has performed in Puss in Boots (Greenwich Theatre) and recently finished performing in The Drowsy Chaperone (The Lost Theatre). She’s thrilled to be part of Tête à Tête: The Opera Festival 2014 and performing in THE CHOKER.

Born in Plymouth, Lucy Clements studied at Winchester and gained a BA in Performing Arts. She has undertaken numerous roles on stage and in film. Credits include: The Sleeping Room, The ABC’s of Death and Escape from London. For more information visit: http://lucy-­‐clements.wix.com/actress.

Yvette Pepper recently graduated from the American Musical Theatre Academy. Musical theatre credits, whilst training, include: Sweeney Todd, The Wild Party, Sweet Charity, The Drowsy Chaperone and Elegies for Angels, Punks and Raging Queens. Yvette has also appeared in Arundel Festival in a number of performances.

Rebecca Sibthorpe recently completed an intensive performance-­‐based course at the American Musical Theatre Academy, having previously gained an honours degree in Musical Theatre. A triple threat, she has performed on stage from childhood, and is now taking her first steps into the professional world of entertainment.