A man is stuffing himself on his favourite Middle-Eastern dish. Gradually memories of a massacre come back to haunt him. Opera Lab Europe bring this new staging of Zad Moultaka’s a cappella opera to London direct from performances in Lisbon.

A man is stuffing himself on his favourite Middle-Eastern dish. Gradually memories of a massacre come back to haunt him. Opera Lab Europe bring this new staging of Zad Moultaka’s a cappella opera to London direct from performances in Lisbon. Arab folk musical influences and a surreal German text combine in an opera that draws on the composer’s memories of the Lebanese Civil War. 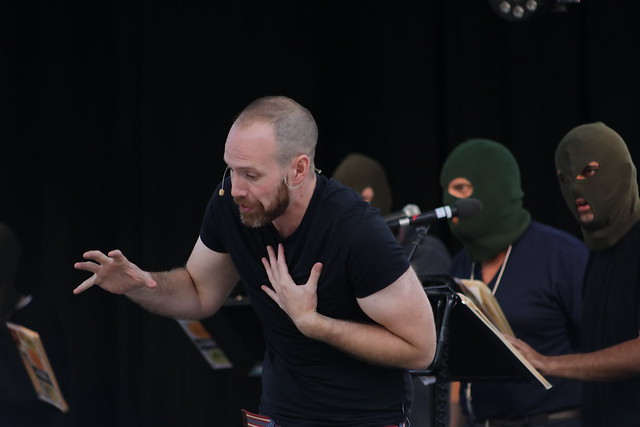 Zad Moultaka is Franco-Lebanese composer born June 4, 1967 in Wadi Chahrour (Lebanon). A pianist by training, he studied at the Beirut Conservatory then at the Paris Conservatory and then began a career as a classical soloist. Believing composing to be a space to be explored, he abandoned his international career as a performer in 1993 to devote himself to composition. Trained in the rigour of Western musical composition but intrinsically tied to his Arab roots and to an oral tradition of music, he reconciled musical gesture and notation, going beyond the contingencies of both. Lying halfway between East and West, his music thus integrates duality and the fusion of genres, combinations of Western and Arab instruments, contemporary Western composition and oriental specificities (monody, modality, vocality, quarter tones, etc.), a collective memory of old and modern. Zad Moultaka has written for all formations with a predilection for the voice, a platform for his multiple experiments on its relationship to language, tone-colour, energy and micro-intervals. His works include Zàrani (2002); Zirk (2003); Khat (2007); Ligéa (2009), from Homer’s Odyssey; L’Autre rive (2009), aural reminiscences of his childhood in Beirut; and Zajal (2010), a chamber opera. He represented Lebanon at the 2017 Venice Biennale.

Max Hoehn is a British-Swiss directo. He is the winner of the 2015 Independent Opera Director Fellowship and a prize-winner at the latest Europäischer Opernregie-Preis in Berlin. He received a nomination for Best Young Director at the 2016 International Opera Awards. His recent productions include the UK premiere of Biedermann and the Arsonists by Šimon Voseček at Independent Opera at Sadler’s Wells (included in The Guardian’s Classical Top 10 in 2015), Ullmann’s Der Kaiser von Atlantis and a pop-up staging of Stephen Oliver’s wordless farce The Waiter’s Revenge for Birmingham Opera Company and National Opera Studio’s Residency at Scottish Opera. In 2013 – 14 he worked with Graham Vick on two Musorgsky projects: Songs and Dances of Death and a new production of Khovanshchina for which he wrote a new English translation entitled Khovanskygate: A National Enquiry. He took part

as both librettist and director in the 2014/15 Jerwood Opera Writing Programme at Aldeburgh. As Assistant Director he has worked for Glyndebourne, Opernhaus Zürich, Welsh National Opera, Grange Park Opera and with the Mariinsky on Tour at the Edinburgh International Festival. This coming season will take him to companies such as Oper Frankfurt and Grand Théâtre de Genève.

Clara Coelho has a Masters in Choir Conducting, having studied at the Escola Superior de Música de Lisboa (ESML) in the fields of Ear Training and Choir Conducting. She worked with Vasco Azevedo, Paulo Lourenço, Michel Corboz, Alexander Polishuk, Stephen Coker and Jean-Marc Burfin. In the last 10 years, she has rehearsed and conducted several ensembles, such as the Coro do Estúdio de Ópera da ESML, Coro do Tejo, Grupo Vocal Lusivoce and the festival’s Les Musicailles de Grillon Choir in France.

As a soprano she is part of the Gulbenkian Choir since 1997, having also collaborated in the music preparation in rehearsals, especially in works of the modern and contemporary repertoire. She has also been part of other ensembles, such as the Officium Grupo Vocal, Voces Caelestes, Ensemble MPMP and Studio Contrapuncti. She has a large experience as a teacher at a university level, having taught since 2001 at the ESML and at the Academia Nacional Superior de Orquestra the electives of Ear Training for instrumentalists and conductors, Ensemble Music and Choir Conducting Techniques.

Nicholas Morris trained at the Royal Scottish Academy of Music and Drama. Recently he has appeared as Maxwell Davies’ Mad King with Shadwell Opera, made his debut at Sadler’s Wells with Independent Opera, played Count Almaviva in The Marriage of Figaro and Ceprano in Rigoletto for Opera Brava, and Smirnov in The Bear by Walton. In previous seasons, for Wexford: Judge, Trial by Jury, Andy Tracy in the European premier of Losers by Wargo, Soldat, Salome by Mariotte, and Caporale, Il cappello di paglia di Firenze by Rota. For Glyndebourne: Footman/Waiter in Der Rosenkavalier and Gunner’s Mate, Billy Budd in the UK and New York. He has covered Pollux in Castor and Pollux and Walt Disney in Perfect American for English National Opera and the Gamekeeper and voice of the huntsman in Rusalka for Scottish Opera. Other roles performed include Arcalaus in Amadis de Gaule by J.C.Bach, Don Giovanni, The Officer in Glass’s In the Penal Colony, Emperor Überall in the Emperor of Atlantis, Junius in The Rape of Lucretia, both Dancairo and Escamillo, Carmen, Forester in Cunning Little Vixen, Denisov, War and Peace in Scotland and Russia, Tchelio, L’amour des trois Oranges, Peter, Hänsel und Gretel, and Lindorf, Les contes d’Hoffmann.

In oratorio, she made her Gulbenkian Foundation début in the role of Solomon’s Queen in Handel’s Solomon, returning the following season to sing The Messiah.

She again retuned to the Gulbenkian Foundation, where she performed six new pieces written for her voice, under the baton of Magnus Lindberg.

Inês has recorded a solo CD Alma Ibérica under the Sonus Music label, featuring Portuguese and Spanish songs from the 20th century. This project was an award by the Foundation Gestão dos Direitos dos Artistas.

Co-founder of the Opera Lab Europe, Inês is also the producer of the festival Música na Fábrica.

Marina Pacheco studied with Pedro Telles, José Oliveira Lopes (ESMAE), António Salgado and Sofia Serra (UCP). She was prevoiusly part of the Vlaamse Operastudio and a scholar of both the Leonardo da Vinci Programme and the Robus Foundation. She currently works with conductor Marc Tardue and tenor Paulo Ferreira and regularly in opera, oratory and chamber music, especially in the field of contemporary music.

She is a member of the ENOA, representing the Calouste Gulbenkian Foundation. She has won the Stara Zagora Competition (Bulgaria, 2016) and the Prémio Jovens Músicos in the Voice category (Portugal,

2012). She was awarded the Vladislava Starkova no Pustina Prize (Czech Republic, 2012), the Second, Third and Best Portuguese Song Prize of the 5th and 6th editions of the Portuguese Rotary Foundation Competition (Portugal, 2012/2013) and the Youngest Finalists Prize of the Luciano Neroni Competition (Italy, 2009).

Nelia Goncalves began her music studies at the Conservatório de Música de Coimbra. In 2011 she obtained her Bachelor Degree in Performance (Vocal Studies) at the University of Aveiro, in the class of professor António Salgado and in 2013 she concluded her Master’s Degree in Music Education (Vocal Studies) at the same institution. She regularly takes part in masterclasses with Susan Waters, Pierre Mak, Elisabete Matos, João Paulo Santos, Kathryn Harries, Mark Shanahan, Della Jones, Claudio Desderi and Larissa Diadkova.

As a soloist, she has worked with conductors such has Fernando Miguel Jalôto, António Vassalo Lourenço, Laurence Cummings, Brian Mackay and Nuno Côrte-Real.

In opera she has sung in Dido and Aeneas, by Henry Purcell (2002), Venus and Adonis by John Blow, as Cupid (2007) and Mariann in Il Signor Bruschino by Rossini (2015). She was part of the Teatro Nacional de São Carlos production of the Dialogue des Carmélites and recently, she performed the role of Hansel in a Portuguese version of Humperdinck’s Hansel & Gretel by Alexandre Delgado.

James Hall studied at the Royal College of Music, London. He performs with some of the UK’s leading early music ensembles and opera companies, including the Academy of Ancient Music, the Dunedin Consort, the Monteverdi Choir, the Binchois Consort, Classical Opera, Glyndebourne Festival Opera, and the Royal Opera House, Covent Garden. Recent and upcoming roles include Oberon (cover) in A Midsummer Night’s Dream(Glyndebourne), Johan in the world premiere of David Bruce’s Nothing (Glyndebourne), Zephyrus in Apollo et Hyacinthus (Classical Opera), First Angel/The Boy in Written On Skin (ROH, Covent Garden), Hamor in Jeptha (Academy of Ancient Music), and Rosencrantz in Brett Dean’s Hamlet (Glyndebourne on Tour).

Job Tome was born in 1978 in Matosinhos, he began his music studies at the Conservatório de Música do Porto. He has a Bachelor Degree in Voice from the Escola Superior de Música e Artes do Porto. He was part of the resident singers of the Casa da Música Opera Studio. He performs regularly in the fields of opera, oratory and song recitals with orchestras in Portugal and France. In 2007 he received the prize of best Lied and Portuguese song as well as the first total prize of the Portuguese Rotary Foundation and, in the same year, the Helena Sá e Costa prize of the ESMAE. In 2011 he was awarded the second prize and best Portuguese songs prize of the Luisa Todi competition. In 2008 – 2009 he joined the Centre National d’Artistes Lyriques de Marseille and in 2010 the Academy of the Aix-en-Provence festival, where he has regularly appeared in operatic roles, including Antiloco in Cavalli’s opera Elena under the baton of Leonardo García Alarcon.

Austin Gunn made his debut as Vorsinger Zaide with the Scottish Chamber Orchestra conducted by Sir Charles Mackerras in the Edinburgh International Festival. Other notable EIF performances include 1st Tenor Soloist in Curlew River and ,Zweite Lehrbube’ in Die Meistersinger von Nurnberg with the BBC Scottish Symphony Orchestra.

His English National Opera debut was as Guest John Cage in Dinner Party for ENO MusiCircus, and he has worked with ENO every season since. Eno performances include covering Pliable/Superstition/Celestial Voice in A Pilgrim’s Progress and Dantine in The Perfect American, Gizmo 3 in The Way Back Home and Security Guard in Between Worlds, in preproduction workshops in collaborations together with The Barbican, The Young Vic and ENO. Austin is core principal tenor for ENO Baylis Know the Show events, as Tamino in Magic Flute and Alfredo La Traviata and a member of ENO Opera Squad 2015 and 2016, singing Nanki-Poo in The Mikado and Don Ottavio in Don Giovanni in schools performances.

His Scottish Opera debut was covering Don Ottavio in Don Giovanni, which toured throughout Scotland.