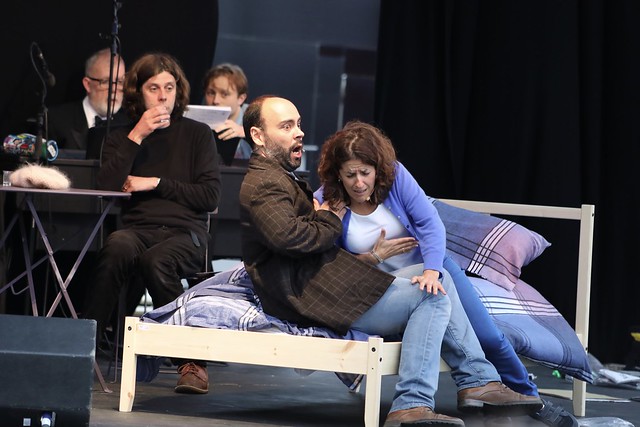 Bill Bankes-Jones has been directing plays and operas for 30 years. After the ITV Regional Young Directors’ Scheme and work at RNT, RSC, ROH and ENO, he founded Tête à Tête in 1997 which has been exploring new futures for opera ever since. Upcoming plans include an arena production of Pagliacci for Scottish Opera.

Timothy Burke studied at Exeter College, Oxford, the GSMD and the National Opera Studio before joining the Jette Parker Young Artists Programme at the Royal Opera House. Recently, he has conducted for ETO, Opera North, Scottish Opera, WNO and the Royal Northern Sinfonia, as well as Les enfants terribles for the Royal Ballet.

Mary Plazas studied at the RNCM and the NOS. Formally a company principal at ENO she has also sung at the ROH, Opera North, Glyndebourne, Aldeburgh, Buxton and Bregenz Festivals, Bayerisches Staatsopera, Opéra Comique and West Australian Opera. She enjoys an international concert career, has broadcast for the BBC, and recorded for DG, Sony, Chandos and Opera Rara.

Alberto Sousa was born in Madeira (Portugal) and finished his training at the GSMD Opera Course. Though specialising in Belcanto repertoire, he’s known as a flexible performer, able to work in many styles and languages. Besides music, Alberto is passionate about Genetic Engineering, Grammar and his ongoing online battle against the Oxford Comma.

Colin Carmichael trained at E15, London. He’s worked with Ridiculusmus, Scarlet Theatre, clod ensemble, Kazuko Hohki, Bristol Old Vic, and was a co-founder of ‘Brian’. Colin has been on the telly and this is his second show with Bill, and it‘s fabulousa! (You can spot him, as he is the one who doesn’t sing.)

If you have enjoyed this performance, why not come and see some more of our festival at RADA Studios from 10 – 13 August ? For full details on what’s on and how to book visit our website at www.tete-a-tete.org.uk – or pick up a copy of our festival brochure from one of the team after the performance!