We’re delighted to announce that Kerry Andrew’s Dart’s Love won the Best Stage Work Award in the 2014 British Composer Awards. We commissioned and developed Dart’s Love and produced the premiere in our 2013 Tête à Tête: The Opera Festival.

When Tête à Tête: The Opera Festival asked me to write a chamber opera, I was a little stumped for ideas. Bill Bankes-­‐Jones, the Festival Director, asked me what I was into. I answered, “wild swimming!”, and Bill, without missing a beat, said “GREAT! Do one about that”. I have become a big fan of hurling myself into rivers and lakes, as well as my trusty, and often extremely bracing, Brockwell Lido (near Brixton). I passed Roger Deakin’s wonderful watery odyssey around Britain, the book Waterlog, onto librettist Tamsin Collison for inspiration and – along with a lot more research on her part – she came back with a brilliant story inspired by the legend of the River Dart (‘River Dart, River Dart, every year thou claims’t a heart’) and recent floods in the South West. I had such fun working with Tamsin’s words, and used my often daily visits to the Lido for inspiration; I worked out the time signatures of swimming strokes, listened to the bubbles as I blew out underwater, and imagined the gasps and yells of swimmers (not as hard as me) as they jumped into the cold water. Massive thanks to Tamsin, Bill, Tim and Tim, the cast and CHROMA. This opera is dedicated to my husband Andy, my wild swimming partner in crime who always jumps in first, as well as everyone else I’ve ever swum with outdoors. (Kerry Andrew)

The River Dart is delighted as the Swimmer returns for another dip, but is then aghast as heis joined by a new Girlfriend. The River drowns the Girlfriend in a fury, the Swimmer leaves resolving never to return. 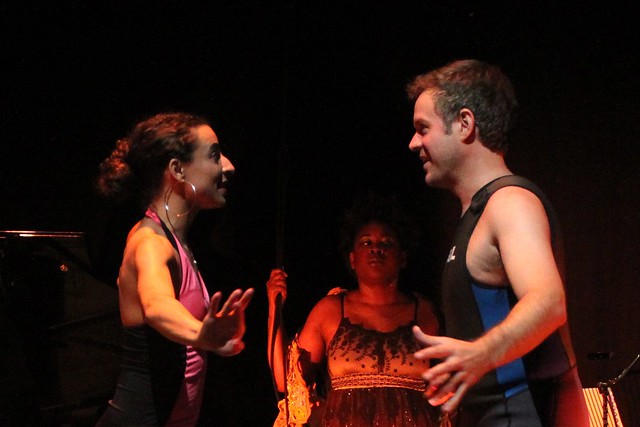 Kerry Andrew is an award-­‐winning composer and performer based in London. She performs with experimental vocal trio juice, as alt-­‐folk soloist You Are Wolf and with jazz groups Metamorphic and DOLLYman. Her wild swimming tip: Wellsfoot Island on the Dart. kerryandrew.net

Rebecca Askew is a performer/songwriter, who studied jazz at the GSMD. A member of The Shout, she has spent much of her professional career singing new a cappella music in both theatrical and concert settings– including Flam and Jilted (www.flamproductions.com) –and as a soloist with The Voice Project (Norwich).

Bill Bankes-­‐Jones has directed all Tête à Tête shows, written the words of several, and masterminded all seven Festivals. He trained under the ITV Regional Theatre Young Director’s Scheme, and enjoys a busy freelance career – including, most recently, Hansel & Gretel for Scottish Opera (Director and Translator) and Entführung for Iford – and chairs the Opera & Music Theatre Forum.

Tête: The Opera Festival, and previously conducted Der Jasager, Trouble in Tahiti and The Crocodile at the Grimeborn Opera Festival.

CHROMA has been Associate Ensemble for Tête à Tête since 2006, and has been involved in developing new works though each annual edition of Tête à Tête: The Opera Festival. CHROMA is dedicated both to new music and to revisiting classic repertoire in fresh and exciting contexts; mentoring the next generation of composers, and involving audiences in compelling, inspirational experiences. www.chromaensemble.co.uk

Tamsin Collison is a graduate of ‘The Knack’ (English National Opera) and ‘The Singing Word’ (Royal Opera House), and a member of the ‘Book, Music & Lyrics’ music theatre songwriting workshop.Dart’s Love is her third commission for Tête à Tête, following Lite Bites: Love Bytes (2012) and Cat-­‐astrophe (2013).

Stewart French is a classical guitarist interested in collaborative creativity projects and recording research. This season he will be performing concertos with the Royal Philharmonic Orchestra and premiering his Beethoven project with Tetra Guitar Quartet at Kings Place. He holds a DipRAM from RAM and read mathematics at Cambridge.

Stuart King is a founding member, clarinettist and Artistic Director of CHROMA. He is fortunate to be able to divide his time between his twin passions of contemporary chamber music and opera and education, working with many of the UKs leading creative artists and as a mentor, nurturing the next generation, oftenat the same time. When not being creative or inspiring, Stuart can usually be found in the gym, or eating!

Tim Meacock is Associate Designer with Tête à Tête, and overjoyed to be designing Dart’s Love.

Ian Ryan studied at the Guildhall School of Music and Drama and National Opera Studio. He was a Staff Repetiteur for Scottish Opera between 2007 and 2010, and now works formany other companies including ENO, ROH, Opera North, BBC Symphony Orchestra, Edinburgh International Festival, and Music Theatre Wales.

Claire Shovelton has been working with Tête à Tête: The Opera Festival since its first outing in 2007. Her past includes Riverside Studios, the Young Vic, the West End, operafactory and early opera company. In addition to producing CHROMA’s wildly diverse activity, her present also includes freelance photography.

Rebecca Thorn trained at the Drama Centre and is an actress, vocalist, songwriter and pianist. She has worked extensively in theatre and television. She has released one album, This Is Why, and is currently working on her second, The 1971 Project. She has written music for radio and theatre and sung on numerous commercials.