Opera Room writes and produces new work forged from classic traditions for a modern audience. Richard Knight’s music is steeped in the classics but imbued with his own style and passions. Norman Welch writes dynamic stories and creates characters that straddle the line between archetype and day-­‐to-­‐day reality. The direction of Neil Smith comes from theatrical traditions that explore the aliveness of the event and the dynamic connection between performer and audience.

When a young woman is hit by a car, she is thrown into the air.EBB follows her experience during these final seconds, as shock and trauma release memories of a video message from her father – recorded when she was little – explaining his own upcoming death from cancer, and of her uncle singing a requiem mass at her father’s funeral. The piece is a final journey towards untimely death and a beatific realisation of the nature of existence, captured in but a few seconds, experienced in this one-­‐act operatic study. 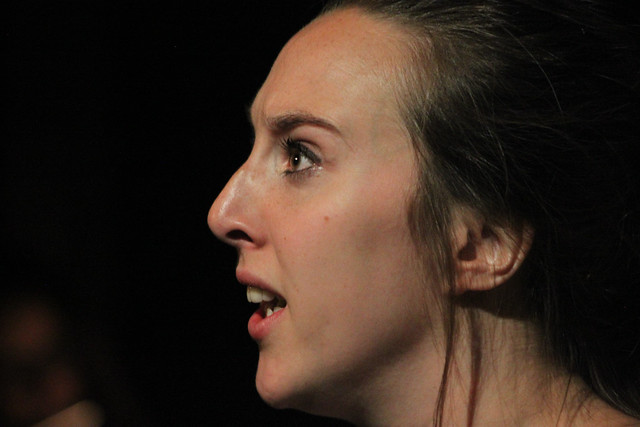 Richard Knight’s many works include oratorio, orchestral and chamber music. His music has been performed in cities from New York to L’viv. He has composed two full-­‐scale operas, two one-­‐act operas and a song-­‐cycle for Opera Room. His tango cantata was recently premiered by the Malvern Festival Chorus and Tango Siempre.

Norman Welch studied Literature and Creative Writing at the University of Missouri. He worked as an entertainment journalist in North Carolina, writing about music and theatre, before moving to the United Kingdom. He is also a lyricist for choral pieces whose work has been published by the Oxford University Press.

Neil Smith is a playwright and Artistic Director of both Opera Room and Crucial Theatre. He has worked in the UK, Poland and the Isle of Man. While his work spans various forms of live performance, he mostly focuses on new work, modern myths and actor training in the rehearsal process.

Elspeth Wilkes studied at King’s College, London, Trinity College of Music and the Royal Academy of Music. She has performed in places from the Royal Opera House to St Giles’ Cathedral, Edinburgh, and has worked with organisations from the Royal Ballet and the RSC to Opera Up Close and Opera de Baugé.

Rebecca Abbott is a creative producer and director of theatre and events. She studied Performance Arts at the Central School of Speech and Drama. Her previous projects have included work for the Royal Opera House, Southbank Centre, London Fashion Week, Channel 4 and Tate Modern.

Charlotte Dobson read Film, Radio and Television Studies at Canterbury Christ Church University. She has worked in theatre since the age of 14, as an actress and stage manager or photographer on both professional and amateur productions.

Mark Fleischmann trained at the Central School of Speech and Drama and, since then, has appeared in The Cherry Orchard (National Theatre), The Collector (Arcola), Wolfblood (CBBC/Disney), Being Human (BBC), Hollyoaks (Channel4), Inception (Warner Brothers), Stan Lee’s Lucky Man (Sky 1), The Five (Sky 1) and Brothers in Blood (Contact Theatre Manchester).