Opera Room develops, writes and produces original opera. We are always exploring new ways to tell a story. FLAT PACK is an exercise in concision: a tight narrative in one location, using only two instruments and a single voice. In terms of production, we’re excited by the opportunity Tête à Tête: The Opera Festival 2014 has given us to hold the first performance in a unique environment that enables us to communicate the intentions of the piece, as well as stimulating an exciting relationship with the audience.

Why can’t life be that easy?

FLAT PACK is a new tragicomic micro-­‐opera from Opera Room. 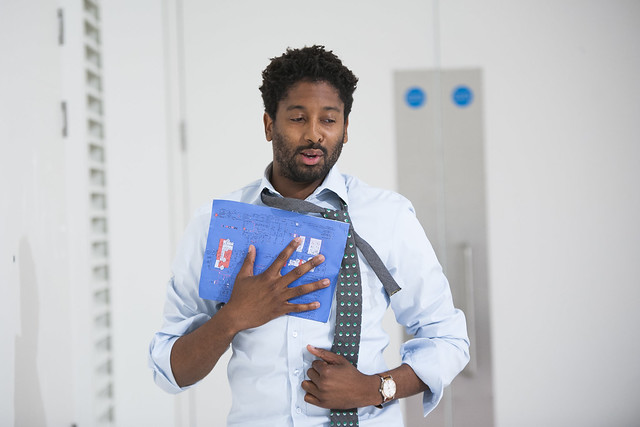 Richard Knight has worked in education as a teacher, examiner and author. He studied music at St John’s College (Oxford), where he was an Organ Scholar, and then Director of Music forfourteen years. His compositions – including the oratorio, The Crown of Life – have been performed internationally.

Norman Welch studied Literature and Creative Writing at the University of Missouri. He worked as an entertainment journalist in North Carolina – writing about music and theatre – before moving to the United Kingdom. He is also a lyricist and has had choral works published by the Oxford University Press.

Neil Smith is a freelance director and writer, Co-­‐Artistic Director of Opera Room and Artistic Director of Crucial Theatre. He has worked around the UK, as well as Poland and the Isle of Man. Whilst his work spans various forms of live performance, he focuses on new work, modern myths and actor training in the rehearsal process.

Charlotte Dobson read Film, Radio and Television Studies with Digital Culture, Arts and Media at Canterbury Christ Church University, where she majored in Professional Perspectives for Creative Industries. She has worked in theatre since the age of fourteen. She has worked backstage as stage manager and photographer on both professional and amateur productions. She joined Opera Room in 2012 as Production Manager.

Ned Welch acted in, and carried out technical theatre work for plays at both Malvern College and King William’s College (Isle of Man). He is a writer and video games enthusiast. He has previously run sound and lighting on two Opera Room productions: All to Play For and The Invited.

Aled Jones is a versatile viola player, based in London. He studied at the Royal Welsh College Of Music& Drama before continuing studies at the Royal College of Music. Aled is in demand as an orchestral and chamber musician and is a founding member of Quartet Voluté – who play regular recitals throughout the UK.

Emma Westley studies bassoon with Martin Gatt and Sarah Burnett at the Royal College of Music (RCM) and is generously supported by a Robert McFadzean Whyte Award. Previously, she attended the RCM Junior Department and was principal bassoon in the National Youth Wind Orchestra – performing at the BBC Proms in 2012.