Gravity has been developed as a site-specific, as well as a Tte--Tte specific, ten-minute show on the Riverside Terrace. It is a slice of modern communication as a performative act which turns the everyday into an aesthetic experience. Gravity makes the time into a theme in and of itself.

GRAVITY emerged from a former experiment – The only thing that keeps us from flying off is the force of gravity, or the no-­‐show, or Alzheimer’s astronauts – exploring the spoken versa the sung dialogue, wherein I myself performed on stage whilst interacting with another performer. Without remembering the text in full, I read the text, the singer responding. The first presentation turned out to be an experiment in itself – transformed into an improvised rehearsal – that was as much about the audience as it was about the subject matter. My aim was to draw together the light, drifting material of life, Time, and our daily struggle with choices, all of which determine the moment, our experience, the day, and our imminent, foreseeable future.

GRAVITY has been developed as a site-­‐specific, as well as a Tête à Tête specific, ten-­‐minute show to take place on the Riverside Studio’s terrace. It is a slice of modern communication as a performative act, which turns the “everyday” into an aesthetic experience. GRAVITY makes “time” a theme in, and of itself. 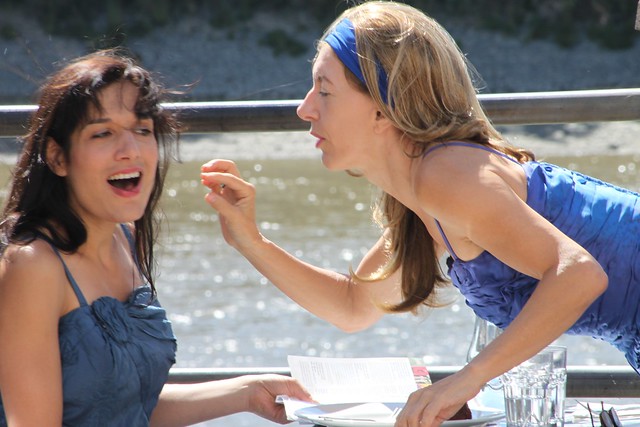 Roswitha Gerlitz has worked extensively and internationally as a set/costume designer in opera, theatre and dance. Sine 2001, she has been developing and producing her own ideas and interests as an artist, writer and director. At present, Roswitha explores and extends her artistic practice through her studies at Brunel University, with the aim to develop new approaches and concepts for a multimedia choral piece that merges live art and opera. www.roswithagerlitz.co.uk

Sibylla Meinenberg trained at East 15 Acting School. Theatre/Opera credits include: Elektra, The Cumnor Affair and In her little room (Riverside Studios), Judith, A Parting From The Body and Caligula (Hologram Rose), and The Man With Two Horns (French Institute). Recent films include: Talion-­‐Face to Face, and Fata Morgana