Set in an oppressively happy valley ruled by a mad king and his morose daughter, ‘i’ is a twisted love story about an inventor who teaches his invention how to speak. Both the music and text are based on research on Artificial Intelligence, and the cast combines singer-songwriters and opera singers.

The story of ‘i’ was born out of the search for a tragedy: Waste Paper Opera’s large operatic project God’s Funeral & a Nightingale which tells the story of a bet between god and his jester on the jester’s ability to tell the saddest story in the universe. The Jester goes down to earth, where he encounters a spirit who interferes with his storytelling. Three self-contained stories come into existence out of their fight for narrative supremacy. The Remarkable Rocket, which was performed at last year’s Tête à Tête Cubitt Sessions, was the first. ‘i’ is the second story, as told by the same shape-shifting Jester.

‘i’ is an exploration of the latent eroticism in the (mostly male) human desire to create (mostly female) artificial beings. James Oldham’s interest in creating a musical language based on phonetics was the musical cornerstone of the opera. The story of ‘i’ can be understood as part of the same tradition of the Pygmalion myth and eighteenth-century automata (which Klara studied for her Masters), with the seldom explored notion of language development taking a central role in the story.

We are pleased to be working with Janelle Shane and Dr Amita Kapoor of the University of California, San Diego, who supplied us with text, generated by an artificial neural network that was trained on Shakespeare’s sonnets and Indian epics. These words, and the various training processes it underwent, is now the text of the android in our story. 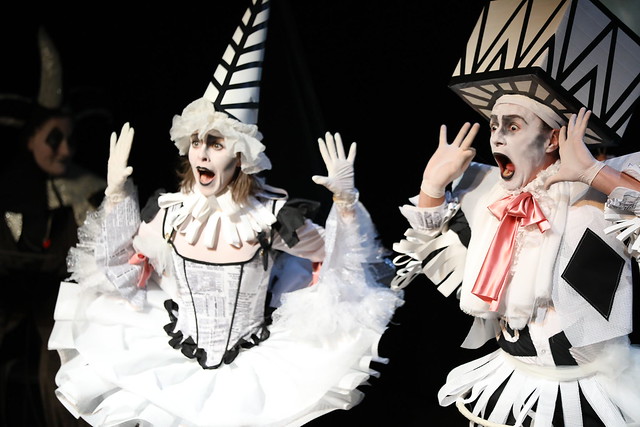 Klara Kofen writes libretti, directs, makes costumes (mostly using paper), has a penchant for ‘pataphysics’, and originally wanted to become a historian of the European Enlightenment. She is from Germany, studied at Glasgow and Oxford and is about to start the MA in Opera Making at Guildhall. She is the co-Artistic Director of Waste Paper Opera Company.

Cameron Dodds is currently studying for his PhD at the Guildhall Drama under the supervision of Laurence Crane. His music has been played around Europe in venues such as Wigmore Hall, The Orgelpark, Milton Court and The Place Theatre and played by many internationally recognised ensembles and performers such as Plus Minus, EXAUDI, Waste Paper Players and Decibel.

Daniel Galbreath is a Birmingham-based conductor Daniel Galbreath is an active choir leader and chorus master. He conducts new-music chamber choir Via Nova, the Warwickshire County Male Voices, the Midlands Chorale, and Waste Paper experimental opera company. Originally from the US, where he studied and performed as a violist, Daniel’s choral training was with acclaimed conductor Paul Spicer at Birmingham Conservatoire.

Triin Kolmkant is a dress maker and costume designer from Finland. She has worked in Film (The Unknown Solider, 2017), Rölli and The Secret of All Time, 2015), in opera with Estonian National Opera, and Birmingham Opera Company, and has worked as a dressmaker for the Birmingham Royal Ballet. Triin has studied in Finland, Slovakia, and the UK.

Maurice Andresen is a visual artist. He studied communication design at Glasgow School of Art, made a crazy video game about immigration that sought to demystify the refugee experience, to move past the binary representations we’re presented with in the media and by our politicians. Maurice creates weird and dark animations and simulations. He grew up in dark forests.

Caroline Kennedy studied French and Drama from the University of Kent and singing at The RSAMD’s Alexander Gibson Opera School. Caroline has covered a number of roles at The ENO and Scottish Opera and has sung roles for various companies including Mid Wales Opera, Bampton Classical Opera, Holland Park, Nevill Holt, Regents Opera and Opera Della Luna.

Suzie Purkis is a versatile performer and composer, based in Birmingham. She has worked for Diva Opera, Buxton Festival Opera, Kentish Opera, and Birmingham Opera Company. Her premiere performance of Michael Wolter’s short opera The Voyage was broadcast on BBC Radio 3. Other projects have included an opera in a pool, in an ice rink, and singing with gibbons.

Rodrigo Sosa Dal Pozzo is a singer and conductor. He was born Venezuela, and studied in Barcelona, Leipzig, Graz and Stockholm. Rodrigo was a member of the Swedish Radio Choir, and the Capella Reïal de Catalunya, and most recently sang at the Innsbrucker Festwochen der Alten Musik, Smålands Kulturfestival, and Drottningholms Barockensemble. His first solo album Pure Haute-contre was released in February 2017.

Przemyslaw Baranek studied in Bydgoszcz, Poland and Milan. Before joining the chorus of the Accademia Teatro alla Scala and the Giuseppe Verdi Symphonic Chorus of Milan, he toured with the Polish folk and dance group Płomienie across Europe. In the UK, he has worked with Birmingham Opera Company, Grange Park Opera and Opus Opera.

Benjamin Kane studied Jazz music at Birmingham Conservatoire under Jeff Williams. After graduating, he joined Turner Prize winning artist Martin Creed’s band, with whom he toured around the world for two years. Ben is a member of the band Runtime, who recently held an Open Space residency at Aldeburgh. These days, he focuses mainly on his own band, The Bank Accounts.

Anna Palmer is a multi-instrumentalist and interdisciplinary performer. She studied composition at Birmingham Conservatoire and is the creative force behind the genre-fluid band Dorcha, who have been played on BBC R 6 and on BBC R 3. Through various fund-raisers for Birmingham Women’s aid, as well as giving a Ted Talk at the opening of the new Birmingham Library, Anna’s commitment to her local community continues to develop her pallet as a well-rounded artist.

Aaron Diaz is an improviser and composer based in Birmingham, specialising in improvisation, electronics and folk and traditional music. Aaron studied jazz at Birmingham Conservatoire, Improvisation in Gothenburg. He is a member of the contemporary folk septet The Fair Rain, Anglo-Norwegian electronic trio ELDA, The Destroyers, and will soon be performing in the RSC’s upcoming production of Christopher Marlowe’s Dido, Queen of Carthage.

Sarah Farmer is a Birmingham-based artist and musician mostly working with sound and violins. A poor woman’s scientist and crafts person, taking an interest in questions of science and technology, exploring them through hands on endeavours. Sarah studied at Fine Art and Violin at BCU and Birmingham Conservatoire, has played at the BBC Proms, Wigmore Hall, and worked extensively with Thallein Ensemble.

Danyal Dhondy is a composer from South London. He is founder of Lucid Arts and Music, which has produced new works of theatre and opera at Tête à Tête Festival, The Yard Theatre, and the Bharat Rang Mahotsav Festival. He was nominated for a British Composer award in 2015 and an Arts Foundation Award in Opera Composition in 2010.