In this, the first act, we see the master craftsman Daedalus teaching his son Icarus the art of the smith. But Icarus struggles to match the high expectations of his father. By contrast, Talus, Daedalus’s nephew, surges ahead in his invention – with devastating consequences. 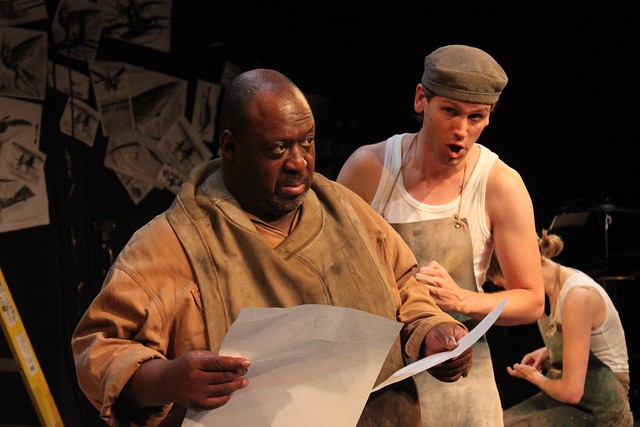 Bill Bankes-Jones: Director is founder and Artistic Director of Tête à Tête and Chair of the Opera and Music Theatre Forum. He has championed new audiences for new opera, and directed all of the company’s productions to date. Recent freelance engagements include The Classical Opera Company, Oxford Shakespeare Company, Blackheath Halls, Trinity College and Iford. Plans include directing his new translation of Hansel and Gretel for Scottish Opera and Circus Tricks for Tête à Tête.

Katherine Bond: Icarus trained as a soprano at Cardiff University and The Royal Academy of Music. She has enjoyed roles with Garsington Opera, Opera, Holland Park and Buxton Festival Opera, as well as solo performances at St Johns Smith Square, Wigmore Hall and on Radio 3. She is delighted to be returning to the festival and looks forward to a fun-filled few weeks!

Natalie Ellis: Festival Production Assistant studied Music at the University of Leeds. When not busking in the rain with her sax quartet, Natalie can be found working with the bright young things of tomorrow at Royal Opera House Education. Tête à Tête: The Opera Festival 2011 will be Natalie’s festival debut.

Liam Fahey: Festival Lighting trained at Westminster College and Exeter University. A bright future was forecast but Liam decided to work in theatre instead. He was freelance for a while, and then worked at Sadler’s Wells Theatre for eleven years where he was the Chief Technician and is now freelance again after moving to sunny Eastbourne in order to eat more ice cream. This is the second time Liam has worked for Tête à Tête having been the Production LX for Salad Days.

Stephen Plaice: Words has written librettos for many prominent contemporary composers, including Harrison Birtwistle, Orlando Gough and Luis Tinoco. He wrote the libretto for Harrison Birtwistle’s dramatic oratorio Angel Fighter, receiving its UK premiere in this year’s BBC proms. With Gough, he is currently writing Imago, a community opera for Glyndebourne for 2013. With the director Stephen Langridge, he co-led the Jerwood Opera Writing Programme at Aldeburgh this year.

Bob auditioned for the role of Harry Potter, had he got the part the world would be a much better place. Instead he became a Production Manager and is currently working at the Royal Opera House.

Michael has written for a wide variety of forces, premieres in 2010 include Allele for 40 voices and Mandelstam Settings for mezzo-soprano and piano. He also introduced his work-in-progress Icarus at the Tête à Tête: The Opera Festival 2010. His The Impermanence of Things for piano, ensemble and electronics, a London Sinfonietta commission, was shortlisted for last year’s Royal Philharmonic Society awards. Present commissions comprise new works for CHROMA and the BBC Symphony Orchestra.

CHROMA has been Associate Ensemble for Tête à Tête since 2006, and has been involved in developing new works though each annual edition of Tête à Tête: The Opera Festival. Founded in 1997, the ensemble is most closely associated with contemporary music, with a diverse participation programme and collaborations involving different art forms. It has close links with many British composers, performing companies and conservatoires through various premières and collaborations.

Sarah pursues a lively career as a flautist. She is a member of Britten Sinfonia, CHROMA and The Marais Ensemble and has appeared as guest Principal Flute with many of the major UK orchestras. Sarah runs music workshops in Special Needs Schools and organises an annual Music Festival in her home town of Potton in Bedfordshire.

Neill grew up in Scotland and studied Trombone at Trinity College of Music. He has a particular interest in contemporary music and has been involved in recent projects for the Opera Group and Sadler’s Wells as well as CHROMA.

Elena is now back in the UK after an exciting 18 months enjoying working in various orchestras in Norway. She is very excited to be getting back into contemporary repertoire over the next few months with CHROMA, Aurora and Sadler’s Wells and having caught the travel bug, is now wondering about exploring some work possibilities in Spain in the New Year.

Stuart King enjoys a vibrant career that embraces many different art forms: contemporary classical music, dance, fine art, opera, outreach-participation, arranging, teaching, mentoring and directing. Equally at home behind a clarinet or treading the catwalks of Paris, Stuart has been Artistic Director of CHROMA for 14 years.

Ian Watson graduated from the Royal Academy of Music, London in 2000 with Accordion as principal Instrument. He has a busy and varied free-lance career performing with orchestras around the world as well as top European chamber groups (London Sinfonietta, BCMG, Britten Sinfonia, Ensemble Modern, Scottish Ensemble, CHROMA, and Icebreaker). He also plays on film scores, with bands (Sophie Solomon, The Divine Comedy) and in the West End.

Australian violinist Deborah White has lived in London since 2002. In Australia she held the position of principal 2nd of the APO from the age of 23 also working on contemporary music scene. As a freelancer in London, Deborah has worked with many of the major orchestras, most frequently the CBSO. She led the Birmingham Opera Company production of Othello in 2009 and the Presteigne Festival Orchestra in the same year. Most recently she has been offered an onstage job with the Cirque du Soleil.