ID, Please is an opera for the age of Brexit and Trump, set at border control and exploring themes of immigration, identity and xenophobia. The work took on new relevance when its British-Iranian composer was almost prevented from attending rehearsals in the US as part of the first ‘Muslim Ban’.

This performance was accompanied by a free pre-performance talk in the Founders’ Studio (6pm) involving members of the production team and Counterpoints Arts, an organisation promoting art by refugees and migrants. We discussed the recent tide of xenophobia in the UK and ask what role the arts should play in responding to anti-immigrant rhetoric.

ID, Please is a 40-minute chamber opera about immigration and border security featuring music by Soosan Lolavar and libretto by Daniel Hirsch. The pair met in the US while studying at Carnegie Mellon University.

ID, Please was developed in reaction to xenophobic rhetoric surrounding the American presidential campaign, Brexit referendum, and Syrian refugee crisis. It was also inspired by personal experiences of its creators: Soosan is a British-Iranian composer whose music incorporates Western and Iranian traditions; and Daniel is a queer, American Jew who has travelled and written about the Middle East. To include verbatim text and original research, Soosan and Daniel composed an online questionnaire seeking personal experiences related to crossing international borders. They received about two dozen responses and several direct quotes from the questionnaire are included in the libretto.

The opera’s themes became even more personal for the collaborators when President Trump’s de facto Muslim ban threatened to keep Soosan from entering the United States due to her Iranian citizenship. It was unclear if they would be able to finish the opera during this time. Luckily, her flight was on the day a federal judge struck down President Trump’s executive order, and the opera was completed as scheduled. 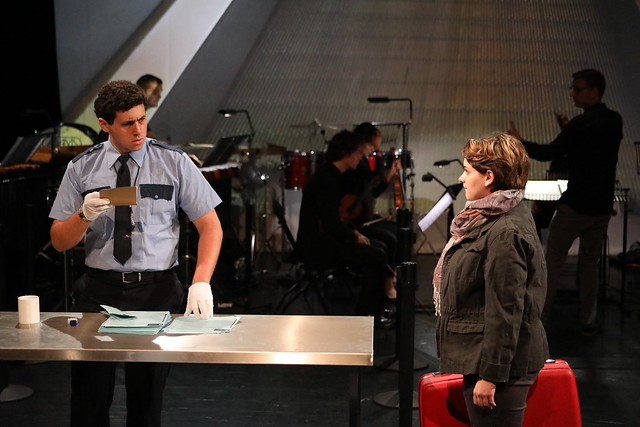 Soosan Lolavar is a British-Iranian composer whose work has been performed in North America, Europe and the Middle East, broadcast on BBC television in the UK and Iran, and played on BBC Radio 3. Having studied Iranian classical music with the help of a Fulbright Scholarship, her music draws on both Western and Iranian traditions.

Daniel Hirsch is a multi-disciplinary writer based in Pittsburgh. His theatrical work has appeared in theatres across the US. He’s been the recipient of an Alfred P. Sloan Foundation screenwriting prize and a Society for Professional Journalism award. He has a BA from Stanford University and an MFA from Carnegie Mellon.

Stephen M. Eckert is a current John Wells Directing Fellow at Carnegie Mellon University and the founder of Promethean Theatre Company in New Orleans. Recent credits include Marlowe’s Edward II, (CMU,) the regional premier of Annie Baker’s The Flick, a new musical comedy, The Trouble with Dead Boyfriends (MCL Chicago,) and three new operas with the Pittsburgh Opera and the CMU School of Music.

Daniel Nesta Curtis is an American conductor known for innovative programming and skill with contemporary music of all genres. As Artistic Director of the Contemporary Ensemble at Carnegie Mellon University, Curtis has premiered over 80 works and launched Co-Opera, a collaboration between CMU and Pittsburgh Opera. Curtis was Assistant Conductor of the Brooklyn Philharmonic and in November 2016 made his debut conducting the Pittsburgh Symphony. www.danielnestacurtis.com

Nina Bova is a New York based Costume Designer. She is thrilled to continue the journey of ID, Please from CoOpera/Pittsburgh Opera to Tête à Tête:The Opera Festival. MFA from Carnegie Mellon University. ninabova.com

Caitlin Ayer designs scenery for live performance, most recently with the Colorado Shakespeare Festival, Live Arts Bard Biennial, Denver Center for the Performing Arts, and Pittsburgh Opera. She was named a “Young Designer to Watch” by Live Design Magazine and received the Rose Brand Graduate Scene Design Award in 2017.

Jessica Medenbach is a media designer, filmmaker, editor and producer. She is a Video and Media Design MFA candidate at Carnegie Mellon University and holds a BFA in Film from Bard College. Her work has been in the USA, Europe, written about in The New York Times and featured in Times Square.

Kevin O’Hora recently graduated from Carnegie Mellon University with a Master of Arts Management. He has worked in development and producing at The Glimmerglass Festival and New York Musical Festival. He studied classical voice under Daniel Teadt and Claudette Peterson. His writing has been published by the Arts Management and Technology Lab.

Patrick Dailey has been described as possessing “a powerful and elegant countertenor voice”. His operatic and concert repertoire include “Nerone” in Monteverdi’s

Robert Raso is entering his third year at Carnegie Mellon University, where he studies vocal performance. This year, he will appear as Papageno in Die Zauberflöteand Count Robinson in Il matrimonio segreto for CMU’s 2017-2018 opera season.

Founded in 1997, CHROMA is a flexible chamber ensemble dedicated both to new music and to revisiting classic repertoire in fresh and exciting contexts; mentoring the next generation of composers, and involving audiences in compelling, inspirational experiences.

The ensemble has collaborated on many contemporary works for the Royal Opera House, including The Firework-Maker’s Daughter, The Wind in the Willows and the world premieres of Heart of Darkness, The Commission/Café Kafka, Through His Teeth, Glare and 4.48 Psychosis.