“I first encountered Manfred Trojahn’s music in 1994 – namely his first opera Enrico (after Pirandello’s Henry IV) at Kassel Opera – when working as a director in German music theatre. In 2000, I directed Trojahn’s Twelfth Night at Innsbruck. Trojahn is one of the most interesting and frequently performed living composers in Germany. In 2012, Katie Mitchell directed the world premiere of his Orest at Amsterdam. INSOMNIA will, amazingly enough, be the very first staging of one of his works in the UK” – Ralph Bridle.

Though conceived as a song-­‐cycle, Trojahn’s Rilke-­‐settings have an inherent drama and narrative thrust that make them ideally suited for stage production. As a study of a relationship, they have an unsettling universality – making them much more than just a musical biography of Lou Salomé and Rilke.

INSOMNIA is a staged version of composer Manfred Trojahn’s new song-­‐cycle for soprano and piano: eighteen early love poems by Rainer Maria Rilke for Lou Andreas Salomé. Trojahn set this cycle of love lyrics by Rilke to music for his first lover, Lou Salomé – the result of which is a drama in miniature.

The actual love affair between Lou and Rilke – when these poems were written – lasted only four years, but their intense friendship and exchange of thoughts and feelings, real or in letter form, continued for much longer, right up until Rilke’s death from Leukemia in 1926.

Rilke is one of the great pioneers of twentieth-­‐century German literature. Russian intellectual Lou Salomé worked closely with Freud and became the first female psycholanalyst. Together, the names of their respective lovers (or crushes) read like a ‘who’s who’ of contemporary arts, philosophy, psychology and political activism: Nietzsche, Freud, Claire Goll, Baladine Klossowska, Ellen Key, Paula Modersohn-­‐Becker, Marina Zwetajewa and Eleonora Duse, amongst others.

INSOMNIA is a monodrama. Though it is about the lifelong attachment of two people, Lou Salomé tells the story alone. She sings the love-­‐poems of her youthful lover – describing in eighteen discrete and ever more stormy verses the flowering and bitter demise of their brief passion. The songs arealso like a template for their intense friendship of almost thirty years, right down to Rilke’s tragic death. Lou remained the most important person in the poet’s life. Spoken commentary fills in their parallel biographies. Occasionally the narrative veers away from the histiorical figures of Lou and Rilke, becoming something more universal, hence the appearance of that great reader and admirer of Rilke, Marilyn Monroe – the insomniac of the opera’s title. 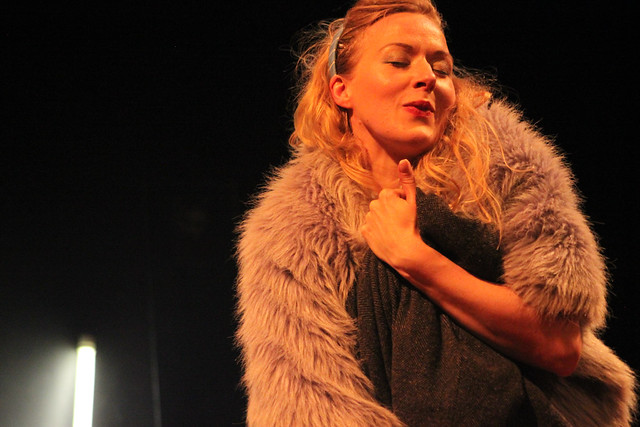 Manfred Trojahn, born at Kremlingen near Braunschweig in1949, is now one of the most established and influential living German composers. (Ralph Bridle has previously directed both his operas Enrico and Twelfth Night.) INSOMNIA is the first staging of a work by Trojahn in the UK.

Ralph Bridle grew up in South London and studied German and Philosophy at Durham University. After first working for the Northern Irish and Edinburgh Fringe festivals, he moved to Germany to direct music and straight drama at numerous state and municipal theatres including: Heidelberg, Mannheim, Zürich and Thalia Hamburg. In 2009, he produced Handel’s Jephtha at the Arcola Theatre.

Cécile Trémolières, born in Paris, trained at Wimbledon College of Art, graduating with a first class degree in June 2013. Cėcile was a Finalist of the Linbury Prize for Stage Design in 2013, awarded the Royal Opera House Linbury bursary in 2015 and nominated Best Set Designer at the Off West End Theatre Awardsin 2014. She is also a winner of the Ideastap graduate award (2014). Cécile’s work will be exhibited at the Prague Quadrennial 2015 and at the V&A exhibition Make/Believe: UK Design for Performance 2011-­‐2015.

David Eaton studied at the Royal College of Music. He is busy as an accompanist, repetiteur and musical director, and has performed across the UK and the world, as well as live on radio and television. He is Musical Director of Charles Court Opera and, as such, has produced a wide range of opera, operetta and music-­‐theatre, both in London and on tour, as well as co-­‐writing their annual pantomime.