The Jinnee was initially conceived to build operatic repertoire with appeal for both adults and children, using a well loved and known tale from the ancientOne Thousand and One Nights. The full length production is performed more traditionally and features a children’s chorus on stage. The creative team is also now exploring the additional possibility of using scenes from the piece to both enthuse and educate younger children about opera and to encourage participation as both audience and performers.

Aladdin has been tricked by a wicked Sorcerer to enter a dark and dingy cave to find a magical lamp. The Sorcerer allows Aladdin to gather precious jewels from the trees, but Aladdin struggles to carry them. Thinking he has been betrayed, the Sorcerer closes the entrance to the cave and Aladdin is trapped. Aladdin fears he will never escape and shivers with cold, but when he rubs his hands together to keep warm, a friendly Jinnee of the Ring springs to his rescue.

Aladdin is home, safe and sound, and has discovered another Jinnee in the magical lamp. He commands him to bring him lots of food and sweets. The Jinnee is furious with Aladdin for disturbing his rest. He tells Aladdin how he came to be a prisoner of the lamp, and warns Aladdin: be careful what you wish for. 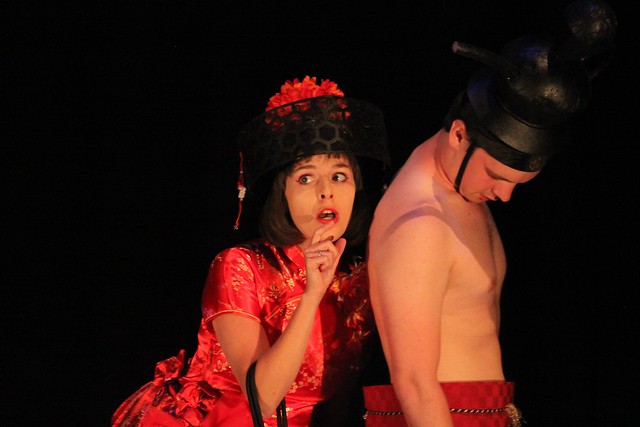 Hair and Make Up: Emi Kusaba

Jinnee of the Ring: Caroline Kennedy

Jinnee of the Lamp: Nick Morton

Hair and Make Up: Emi Kusaba

Jinnee of the Ring: Caroline Kennedy

Jinnee of the Lamp: Nick Morton

Composer Louis Mander trained at the Royal College of Music (RCM) and Birmingham University. He is primarily a composer of opera, but has recently been commissioned for film and ballet scores. His sacred opera,Cantata Eliensis will be premiered at the Gravity Fields Festival (Grantham) in September.www.louismander.com

Hiroko Matsuo has designed over fifty productions across theatre, musicals and opera in Japan and the UK. Recent work includes: Robinson Crusoe (New National Theatre, Tokyo), From Up Here (Tristan Bates Theatre), and Like Enemies of the State (New Diorama Theatre). She is also Designer for Edible Opera.

Jennifer Duncan has just completed the second year of her Acting degree at the University of West London, and recently performed in Annie Jnr and The Permanent Way. Jennifer is also a keen clarinettist, singer and pianist. Future plans include an MA at drama school, and pursuing camera-­‐based acting.

Nicholas Morton is a recent graduate of the RCM where he studies with Peter Savidge and was supported as a Martin Harris Scholar. Recent roles include: L’horloge comtoise/Le Chat in L’enfant et les sortileges, Eisenstein Die Fledermaus and Filippo La Gazzetta.

Lee Axford has been performing professionally in concerts, events and in the theatre – locally and nationally – since 2003. He studied under Swiss concert pianist, Ursula Walliman in Cheltenham. From 2006 onwards he became a regular pianist at one of the royal residences and is now regularly booked for high-­‐profile events.

Alicia Griffiths Turrillas is a busy harpist from Pamplona (Northern Spain) working both in the UK and Spain, performing regularly as a soloist – with many chamber ensembles – and freelancing with orchestras. She holds an MMus from Trinity Laban, where she studied with Gabriella Dall’Olio and Frances Kelly.