It’s a love triangle between a saintly and philosophical cat, a cynical egotist of a mouse and Ignatz, who obsessively seeks to “bean that Kat’s noodle” with a brick. Krazy, blind with love and an idealistic naivety, awaits each brick with joy.

Based on the comic strip Krazy Kat (1913-44) and its cartoonist George Herriman it is set in Coconino County, a landscape inspired by the Navajo lands of Monument Valley in Arizona with endlessly shifting skies, burnt-orange buttes and mesas, flapjack moons and lunatic cacti.

A work in progress brought to life with Tête à Tête’s ingenious flair. 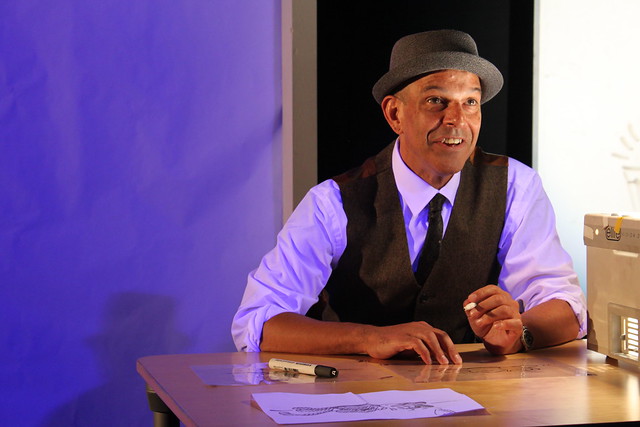 Bill Bankes-Jones is founder and Artistic Director of Tête à Tête. He has championed new audiences for new opera, and directed all of the company’s productions to date. He has worked for the ENO, the National Theatre, the RSC, the Royal Opera and the Salzburg Festivals. Recent engagements include Iford, Trinity College, Blackheath Halls, Oxford Shakespeare Company and the Classical Opera Company.

Omar Ebrahim is a concert and opera singer who has created roles and first performances with many composers and ensembles. He has been associated with the work by Ligeti Aventures et Nouvelles Aventures, a work recorded for Sony and Teldec. Other recordings include Gawain (Sir Harrison Birtwistle), Ballad of Jamie Allan (John Harle), Interzone (Enno Poppe), House of the Sleeping Beauties (Kris Defoort) and Tobias and the Angel (Jonathan Dove).

Joanna Lee Joanna’s work has been shortlisted for a British Composer Award, granted the Stephen Oliver Award and featured in Classical Music magazine’s Premieres of the Year. Performances include Psappha, Orchestra of the Swan, Jane Manning, Elysian Quartet and Joby Burgess, in the Aldeburgh Festival, BMIC Cutting Edge Series and Ultraschall Festival. She has studied on the Britten–Pears Composition Course.

Sarah Leonard  contemporary music specialist has appeared throughout the world in major concert halls, opera houses and festivals and has performed and premiered  works by Birtwistle, Boulez, Berio, Dusapin, Ligeti, Lachenmann, Harvey, Donatoni, Nyman and Joe Cutler with over 30 recordings.  2010/11 concerts include The Chronicles of Archy  Joanna Lee, Got Lost  Helmut Lachenmann, and Lost in Music  Luke Stoneham.

Howard Skempton – Howard Skempton is a composer known mainly for his short piano pieces, his choral music and his orchestral ‘Lento’. His libretto for ‘Krazy Kat’ is his third for Joanna Lee; the second was ‘Lear TV’, a Lite Bite at last year’s Opera Festival.

Joe Shovelton studied at GSMD in London. He performed principally with the D’Oyly Carte Opera Company, at the Savoy Theatre, the R F H and at the Schubert Theatre in New Haven, Connecticut.  Recent roles include: Lippo Fiorentino (Street Scene) for Opéra de Toulon, and for the Opera Grou. Trevelyan (One Day Two Dawns) a community project for English Touring Opera. Future projects include revivals of Street Scene for Opéra de Toulon and The Opera Group, and The Duenna for English Touring Opera.

Alison Wells – Well-known in the field of contemporary music, Alison has sung with all of this country’s leading ensembles and many abroad. Her recent performance of “Miss Donnithorne’s Maggot” was enthusiastically received and will be repeated in Oxford.  She will also sing the premiere of Judith Bingham’s: Mary Anning”.  Recordings include “Pierrot Lunaire” and a disc for voice and clarinet.

CHROMA Founded in 1997, CHROMA has become most closely associated with the performance of contemporary music, participation/learning activity and working across different art forms. It has forged close links with many British composers, performing companies and conservatoires through various premières and collaborations. It has been the
associate ensemble for Tête à Tête since 2006.

Steve Gibson studied Timpani & Percussion at the Guildhall School of Music & Drama. He has recently been working with Jerry Dammers and his ‘Spatial A.K.A Orchestra’ both touring and festival appearances. Other recent projects include ongoing research for a new work directed by Thea Sharrock with Walker Park the contemporary dance company and recording a new film score by Joby Talbot.
Elena Hull After four years at the Yehudi Menuhin School, Elena completed her undergraduate studies as a full scholar at the Royal College of Music under Caroline Emery. She is now a successful freelance player; part of a very wide range of musical undertakings ranging from Baroque to Modern music. She is a member of CHROMA and will be guest principal bass with the Trondheim Symphony and Trondheim Soloists this season.
Stuart King enjoys a vibrant career that embraces many different artforms: contemporary classical music, dance, fine art, opera, outreach-participation, arranging, teaching, mentoring and directing. Equally at home behind a clarinet or treading the catwalks of Paris, Stuart has been Artistic Director of CHROMA for 13 years.
Sarah O’Flynn pursues a lively career as a flautist. She is a member of Britten Sinfonia, CHROMA and The Marais Ensemble and has appeared as guest Principal Flute with many of the major UK orchestras. Sarah runs music workshops in Special Needs Schools and organises an annual Music Festival in her home town of Potton in Bedfordshire.
Clare O’Connell is a founder member of CHROMA, the Rothko String Trio the Saxaphone quartet B(l)ow, and the newly formed Morphosen, she has also appeared with the Mainardi Trio, the Marais Ensemble, the Brunel Ensemble and the Le Page Ensemble.
A prolific performer of contemporary music, she has worked with Ensemble Exposé, the New Music Players, Uroborus Ensemble and Psappha, and been instrumental in commissioning new works for CHROMA and Rothko.She is principal cellist of Sound Collective, a member of the Orchestra of the Swan, and has played with many orchestras including the City of London Sinfonia, RPO, BBC Welsh, Liverpool Philharmonic and the Ulster Orchestra.

Helen Sharp is a founder member of CHROMA and works with all the major London orchestras on a freelance basis, most regularly, the London Philharmonic and the Royal Opera House orchestra. She has also performed as the Penguin MD of the award-winning show for children, Cloud Cuckooland. She trained at the Royal College of Music and Clare College, Cambridge.
Helena Wood has performed chamber music with musicians such as John Lill, Freddy Kempf and Nigel Kennedy and has given recitals at the Wigmore Hall, Purcell Room and the Royal Festival Hall. Helena has performed many concertos at the Queen Elizabeth Hall, the Barbican Hall and St Martin-in-the-Fields. She has been a guest Concertmaster with the BBC Philharmonic Orchestra, Royal Philharmonic Orchestra, The Stuttgart Chamber Orchestra, Royal Philharmonic Concert Orchestra, CHROMA and Welsh National Opera. She is currently the Assistant Leader of English Sinfonia and Principal Violin of English National Opera.