This is a a final showing of our 2009 flashmob-style mini operas which we rehearsed and developed all over the Riverside Studios and the Borough of Hammersmith and Fulham throughout the Festival. We also performed as many of our 2008 Lite Bites as we could manage! The Lite Bites are:

The Upper Clapton Senior Citizens Light Operatic Society is back in town! Septuagenarian soprano Livinia Greengarden is about to take to the stage in the most wildly anticipated show of her career. In the audience is notoriously prim, Claudine d’Armoire, Hackney’s art’s council funding coordinator. Will all go well?

Set in a news channel (a super-dramatic American one), two presenters – Ed (a vain and gregarious duck) and Sheila (a stunning bimbo of a kangaroo) – fall in love and are leaving the screen to ‘hop the whole world three times round’.

Mr Green comes to see Ms Wise about opening an account to save money to buy a house. Mr Wise persuades him to opt for a high interest structured product and to part with large sums of money deposited in a piggy bank. What happens next is a modern day parable based on our current ‘credit crunch’ times.

An athletic and twinkly-eyed Eastern European waiter flirts playfully with a giggly lady-who lunches on a sunny terrace. Through an exchange filled with double entendre we hear his vigorous lament and yearning for a place in his own corrupt, poverty stricken country

The Agony of the Knife Thrower’s Assistant 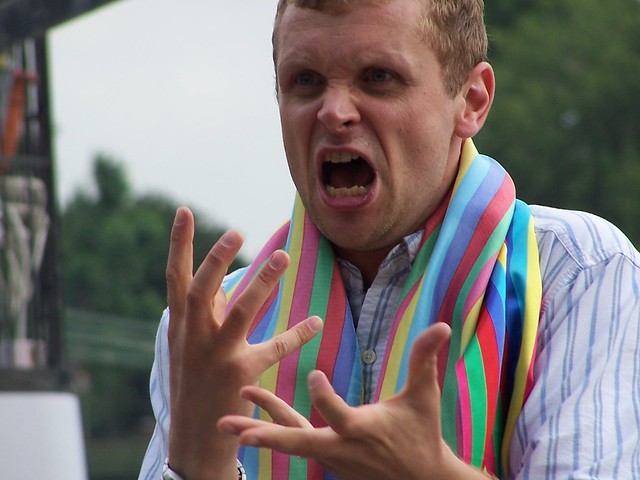