An abandoned husband takes revenge by destroying his wife’s treasured dresses, and with them their memories, love, and perhaps even her very identity and soul.

A letter arrives for Hewson from Margery in Switzerland. This is a surprise to Hewson who thinks Margery will be begging to return and he’ll have to turn her down; after all, he has made other arrangements. But instead she is asking him to arrange the divorce and she presents a list of the dresses she wishes him to send her.

List in hand, Hewson packs up Margery’s dresses into a huge chest. Becoming increasingly impassioned and upset, he accidentally tears their favourite dress. Realising that now Leslie will never have “the Margery”, Hewson spitefully decides to send it to her anyway. Finally loosing control he rips the dress into shreds. 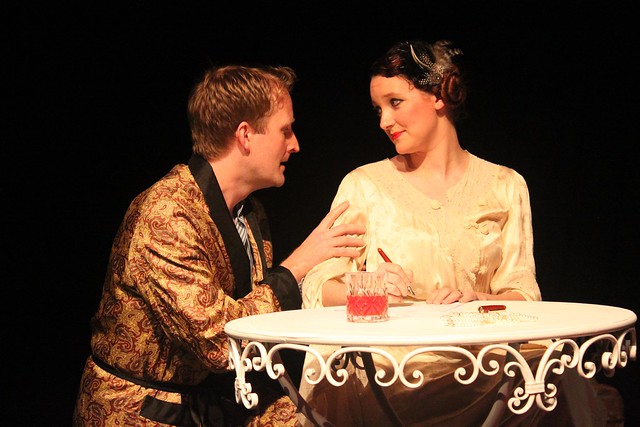 Patrick Ashcroft: Leslie Patrick completed a PhD in Cosmology before studying at the GSMD. He was the recipient of the John Scott Award from Scottish Opera and an Endowment Award from Grange Park Opera. He has also worked with The Royal Opera, Opera North, Opera Holland Park, ETO and at the Buxton Festival.

Bill Bankes -Jones: Director A graduate of the ITV Regional Theatre Young Directors’ Scheme, Bill has worked for over 20 years in both theatre and opera throughout the UK and abroad, including all Tête à Tête’s productions to date. Most recently he translated & directed Hansel & Gretel for Scottish Opera, and directed Great Expectations RCM/Tête à Tête, and Seraglio, Iford.

Charlotte Bray: Music, has emerged as an outstanding talent of her generation. Her music exhibits an uninhibited ambition and desire to communicate and is described as vivid, exhilarating, and richly expressive with a lyrical intensity. This summer she has premières at the BBC Proms and Verbier Festival.

Grant Doyle: Hewson Grant was born in Adelaide in South Australia and studied at the University of Adelaide, the Royal College of Music in London and was a Young Artist at the Royal Opera House, Covent Garden. In the past year he has sung Don Giovanni (Garsington Opera), Figaro (Barber of Seville for English Touring Opera), Robin Oakapple (Ruddigore for Opera North), and Abraham in the acclaimed new work Clemency at the Edinburgh Festival. Future roles includes Zurga (Pearl Fishers) for Opera Holland Park and Ping (Turandot) for the Royal Opera.

Jennifer Frances: Margery Jennifer is a coloratura soprano studying on the opera course at Royal Academy of Music with Lillian Watson and Iain Ledingham. Recent engagements include Zerbinetta (Ariadne auf Naxos) for RAO, Rose Maybud – cover (Ruddigore) for Opera North and her solo recital debut at the Wigmore Hall. She is very excited to be making her debut at Tête à Tête: The Opera Festival this year.

Katie Grosset, Maid, recently finished the summer season at Garsington, and will be an Emerging Artist at Scottish Opera 2012/13 where her roles include ’Flora’/’Annina’ – La Traviata and ‘Edith’ – The Pirates of Penzance. Katie trained at Flanders International Opera Studio and previously at Guildhall School of Music and Drama.

Dr Kate Kennedy: Words is a Research Fellow lecturing in both Music and English at Cambridge University. She is currently writing a biography of the poet and composer Ivor Gurney, and has published widely on music and literature of the early twentieth century. She gives lectures at music and literary festivals, and for the Proms, and appears regularly on BBC Radio 3.

Kally Lloyd-Jones: Choreographer is also a director in the UK and internationally and Artistic Director of Company Chordelia. Opera directing and choreography credits include Scottish Opera, Bloomsbury Opera, and The RCS. She was recently awarded a Herald Angel for directing The Seven Deadly Sins, a Scottish Opera and Company Chordelia co-production. www.kallylloydjones.com

Fabrice Serafino: Designer is thrilled to collaborate with Tête à Tête for a 3rd consecutive year at the Festival.

Visit www.fabriceserafino.com for more info about Fabrice’s past and future design works.

CHROMA has been Associate Ensemble for Tête à Tête since 2006, and has been involved in developing new works through each annual edition of Tête à Tête: The Opera Festival. Founded in 1997, the ensemble is most closely associated with contemporary music, with a diverse participation programme and collaborations involving different art forms. It has close links with many British composers, performing companies and conservatoires through various premières and collaborations.

Marcus Barcham- Stevens: Violin, played with CHROMA for over 10 years; has performed as a chamber musician at the Wigmore Hall and Carnegie Hall New York; and plays in recital with his wife, pianist Christina Lawrie. He has guest-led Ensemble Modern, BCMG, Musikfabrik, and the CBSO. Marcus’ composition, Dhyana, performed in last year’s festival was described as “hugely impressive” by the Guardian.

Clare O’Connell: Cello, is a passionate performer of chamber music. She is a founder member of CHROMA and the Rothko string trio, and has worked with Lontano, Marais Ensemble, Psappha, Ensemble Exposé,the New Music Players, and the Harborough Collective. She curates CHROMA’s series of concerts in Berkhamsted, mixing music with poetry and storytelling to add another dimension to the experience. Recent performances include Haydn’s Cello Concerto in C with the Bridgewater Sinfonia.

Owen Dennis: Cor Anglais, is a member of the Galliard Ensemble, and also plays with the London Sinfonietta, the London Philharmonic Orchestra and the London Mozart Players. He held the principal oboe seat with English Touring Opera for five years.

Sarah O’Flynn: Flute, is a member of Britten Sinfonia, CHROMA and The Marais Ensemble and has appeared as guest Principal Flute with many of the major UK orchestras. Sarah runs music workshops in Special Needs Schools and organises an annual Music Festival in her hometown of Potton in Bedfordshire.

Elena Hull: Double Bass, is a successful freelance bass player. She is an enthusiast for contemporary music and loves exploring both new repertoire and the playing possibilities of the double bass. Her current top musical interests are folk and bluegrass and she is at the beginning of putting an album together exploring the worlds of English and Scandinavian folk with the extraordinary Swedish nyckelharpa player Emilia Amper.

Céine Saout: Harp, Parisienne Celine has been living in London for 13 years. She started playing the harp when she was 8 and studied at GSMD and RAM. She’s a member of Northern Ballet, plays regularly with CBSO, RPO and RLPO. Her interest in contemporary music brings her to perform and premiere a wide range of repertoire as a soloist or with ensembles such as CHROMA and BCMG.