Edward Henderson and Lavinia Murray met when completing a collaborative commission to write an Art song for the Leeds Lieder Festival in 2013. Edward loved Lavinia’s words but immediately felt traditionally setting such dense, hysterical prose to music would be absurd. The result wasI Dust Skinheads With Icing Sugar – a spoken word song that had Lavinia recite her own words accompanied by a tenor saxophone.

After a tour of Yorkshire with Skinheads, the pair wanted to build on the success of their partnership and decided to write a one-­‐man, spoken opera, MANSPANGLED – the title originating from a misprinted, misappropriated quote from Beckett: “I shall state silences more competently that ever a better man spangled the butterflies of vertigo”. In January, it had a scratch performance at The Cockpit Theatre with Second Movement, as well as an outing in Greenwich as part of Bastard Assignments’ S/M/L.

MANSPANGLED is a spoken opera for male solo actor and ensemble. Alongside a saxophone and cello, sits a six-­‐ piece percussion chorus playing combs and emery boards, blowing bubbles and popping bubble wrap. The text takes the audience on a strange ride – full of images and ideas both hilarious and disturbing – through the damaged mind of the opera’s protagonist: Man.

The music consists of slowly repeated figures wherein players are asked to perform tasks over and over again – the cello, for example, plays a very quiet seven-­‐minute glissando (from the top to the bottom of the instrument).

The result is a strange accumulation of tiny sounds, exploring the boundaries of listening and perception. 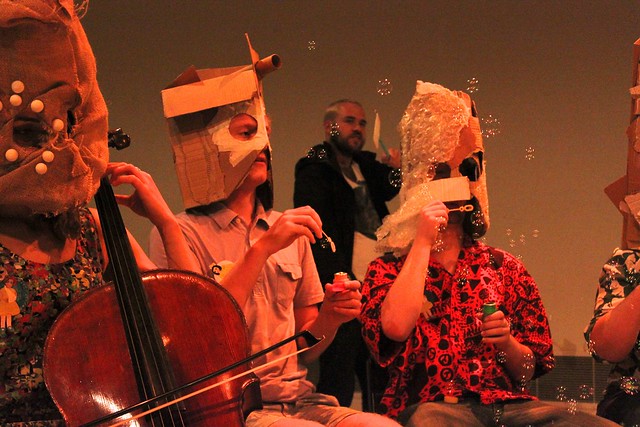 Edward Henderson is a composer who makes work with instructional scores, found sounds, found objects, repetition, duration, physical theatre and audience participation. He is a member of the composers’ collective: Bastard Assignments. He is currently studying for an MMus in Composition at Trinity Laban, where he won the Director’s Prize for Composition. www.edward-­‐henderson.com

Lavinia Murray is an award-­‐winning writer, animator/cartoonist and performer. She trained as a clown at Blackpool Circus and as a robotic dancer/mime with Annie Stainer and New York artiste Topo. She also trained as a storyteller with Ben Haggarty. Her latest play for BBC Radio 4 has just been nominated for the Peter Tinniswood Prize. She has also written for opera.

Zosia Stella-­‐Stawicka graduated in Theatre Design at Nottingham Trent University in 2012 with a 1st class honours. Zosia now works as a Creature Costume Head Maker at Rainbow Productions. She also specialises in making masks and puppets – most recently working for Max Humphries, Stitches and Glue and Les Enfants Terribles. www.zstellasawicka.com

Pablo Navarro MacLochlainn is an actor, singer, songwriter and autoharpist from North London. He specialises in devised, site-­‐specific theatre and folk music. He is a founding member of devised theatre company, Pellegrino – with whom he works regularly, and performs both as a solo musicianand with creep-­‐folk trio, Beach Violence.

Saxophonist Louis Archer performs in a range of ensembles that draw on blues, jazz and contemporary classical sound worlds. Recent projects include playing in a duo with Radio 4 playwright Lavinia Murray at the Leeds Lieder Festival, and appearing at Ronnie Scott’s as a member of the Trinity Laban Contemporary Jazz Ensemble.

Mariona De Lamo comes from Cambrils, Northeast Spain. At the age of eighteen, Mariona moved to Reykjavik, (Iceland) in order to develop her cello studies further, under the guidance of Richard Talkowsky. She has undertaken art performances, acting in short films, live music improvisation and manyother collaborations.

Born in Donegal (Ireland) and graduate of Trinity Laban, Timothy Cape is a composer and performer whose influences range from progressive rock, jazz, and contemporary music to literature, theatre and contemporary dance. He has created performances in Southbank Centre and The Place, and curated events with Bastard Assignments.

Fred Feeney is a musician, composer and teacher living and working in London. After coming into music through jazz, he has – over the past few years – adopted new styles of ordering sounds and now composes and plays music that sometimes sounds like Ryoji Ikeda, Bon Iver and Taylor Swift.

Sophie Fennerty is a conductor and singer based in Tooting. She is currently Assistant Conductor of Lambeth Orchestra and previously directed Orchestra on the Hill in Cambridge. She has private lessons with Peter Stark. In September, she will conduct Mahler’s Symphony No. 2 at St John’s Waterloo.

Caitlin Rowley is a Kent-­‐based Australian composer whose music often draws on the visual Arts as a path to exploring sonic ideas. Her teachers have included Peter Sculthorpe, Errollyn Wallen and Paul Newland. Recent works include: Breadcrumbs (for soprano) – also due to be performed at Tête à Tête: The Opera Festival 2014. www.caitlinrowley.com

Josh Spear is currently completing a Masters degree at Trinity Laban Conservatoire of Music & Dance, where he studies under Edward Jessen. He is a grateful Trinity College London Scholar and recent graduate from the University of Manchester, where he studied Clarinet under Alan Hacker.