The collective was born from our dissatisfaction with the way opera is conventionally made. Director Rebecca Hanbury wanted to tell contemporary stories without the constraints of acomposer’s pre-­‐existing score. Composer Alex Groves wanted to write music collaboratively with performers, creating a more flexible approach to combining music and drama. To make our work, we start with something that interests us – an interview, article, picture or idea. The ensemble makes the piece by responding to it, together, in the rehearsal room.

Tonight’s performance of MIX marks the official launch of Born Mad.We’d love to hear what you thought about MIX – tell us @WeareallBornMad and #BornMadMIX!

This showcase contains past and current works, finishing with a sneak preview ofSister – our new work, which will premiere in 2016.

An exploration of insomnia.

A love story created from the diary entries of British Suffragettes.

A character re-­‐lives the horrors of a police interrogation following the murder of their lover. ft. CN Lester and Sam Morgan (recorded voice), with writer Ben Behrens

An exploration into absurdism and opera.

A verbatim exploration of ageing, memory and sisterhood created using real-­‐life interviews with women from across the country. 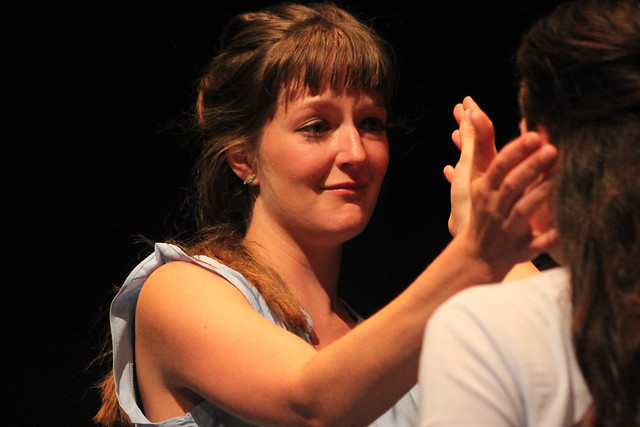 Alex Groves is a London-­‐based composer whose work integrates electronic soundscapes and spoken text with singers and instrumentalists. Recently, he has worked for two seasons with the National Theatre Young Studio, culminating in The Shape of the Impossible (NT Shed), been commissioned to write Tendrillar – a dance work for the Royal Opera House and East London Dance, and composed a number of works in collaboration with performance collective Born Mad. www.alexgroves.co.uk

Rebecca Hanbury is a director working across theatre and opera. Alongside her work with Born Mad, she recently directed The Indian Queen for New Sussex Opera. Her next role is as staff director onOrlando (Welsh National Opera). As an assistant director, she has worked for English Touring Opera, Opera Holland Park, Regents Park Open Air Theatre, Longborough Opera and at the Linbury Studio Theatre, Royal Opera House.

Naomi Kuyck-­‐Cohen is a performance designer collaborating mostly with devised work and new writing. She enjoys multi-­‐disciplinary work, discussing social topics and celebrating the realities of life. As a designer, she has worked with Clout Theatre, Yve Blake, Anoushka Shankar and Jake Orr, amongst others, and presented work both in London and internationally. www.naomikuyckcohen.com

CN Lester is a classical vocalist and researcher, a singer-­‐songwriter and writer. Previous venues include Tate Modern, BFI, the British Library and Channel 4. Their first non-­‐fiction book and third alternative album are both scheduled for release in Autumn 2016. More information at www.cnlester.com.

Emily Phillips combines a classically-­‐trained soprano voice, together with movement and dance, in order to create dynamic theatre. She studied at the Royal Welsh College of Music and Drama, and has been collaborating with Born Mad since its inception. Her recent performances include shows at the Sam Wanamaker Playhouse and National Theatre Young Studio, and small roles for Grange Park Opera, Opera Holland Park and Longborough/Barefoot Opera. www.emilyphillips.weebly.com

Michael Spenceley trained at the Rambert School where he won a Wayne Sleep scholarship. Michael has worked with Protein Dance Company, Precarious Physical Theatre and Multimedia, Rosie Kay Dance Company and Parlor Dance. His own choreography includes Forbidden Love, BBC’s Cash in the Attic and Hope. Most recently, he performed in Happiness with Karla Shacklock Dance Company and is currently choreographer onXerxes for Longbrough Festival Opera.

Chiara Vinci initially trained as a dancer at the Rambert School and has been vocally coached by Jenny Miller. Working across opera, contemporary dance and physical theatre, shecollaborated with Born Mad last year on Psyche. Other productions include Atalanta (cover) Don Pasquale and Xerxes (Longborough Festival Opera) and roles in The Fairy Queen, Dido & Aeneas and Alcina’s Island (Barefoot Opera). This summer, Chiara will sing Giannetta L’elisir d’amore (Barefoot Opera).

Katie Sherrard is a London-­‐based actor. She is soon to finish a national tour of Lorraine and Alan, playing lead role Lorraine for Bucket Club theatre company. She is currently being mentored by actor Andrew Scott. She is thrilled to be performing in Mouse with this brilliant company.

Alice Privett – a graduate of the Royal Academy Opera and Guildhall School of Music – has worked with companies such as Garsington Opera (Cockerel Vixen, cover Gretel), Longborough Festival Opera (Poppea and Romilda Xerxes) and West Green Opera (Gretel). She was a finalist in the Handel and Ferrier competitions (2015), and was the recipient of the Helen Clarke and Leonard Ingrams Awards from Garsington Opera.