Mme Butterfly: The One Man Opera

Fast forward thirty years from the end of Puccini’s iconic opera, Butterfly’s son has travelled to America to meet his father for the first time. However, Pinkerton has become a politician and is campaigning for election as Senator. Will he reject or embrace his only child? Supported by Arts Council England.

Intrigued by Butterfly’s son’s fate after his mother’s suicide and father’s abandonment, I stumbled across the real life couple who inspired the story, and their son: Tomisaburo Glover. Beyond the passionate love story of his parents, he embodies modern issues about identity and father/son relationships. Michael Finnissy had also been intrigued by Puccini’s music, and how the story could be told using both contemporary and Japanese music forms.

The mid-­‐nineteen-­‐thirties. In the entrance hall of the Governor’s mansion in Atlanta, Georgia (USA), a man sits waiting; he has been waiting for the last three days. We discover that he is Tomisaburo, the son of Madam Butterfly and Lieutenant Pinkerton (from the iconic Puccini opera). 35 years after his mother’s suicide, Tomisaburo has journeyed to America in the hope of meeting his father for the first time. In his suitcase are two things his mother’s servant, Suzuki, gave him on her deathbed: his mother’s wedding fan, and the dagger with which his grandfather sacrificed himself for the honour of the Emperor. However, B. F. Pinkerton is now Governor of Georgia and campaigning to be elected to the Senate. Behind the door – that separates public from private space at the mansion – the campaign staff are arguing about how best to deal with the arrival of their candidate’s illegitimate, mixed-­‐race son. Pinkerton’s wife has a plan to rescue her husband’s reputation, but will he co-­‐operate? How much does Tomisaburo know about the true nature of his parents’ marriage, or his mother’s death? Will Pinkerton reject or embrace his only child, and how will his son react? 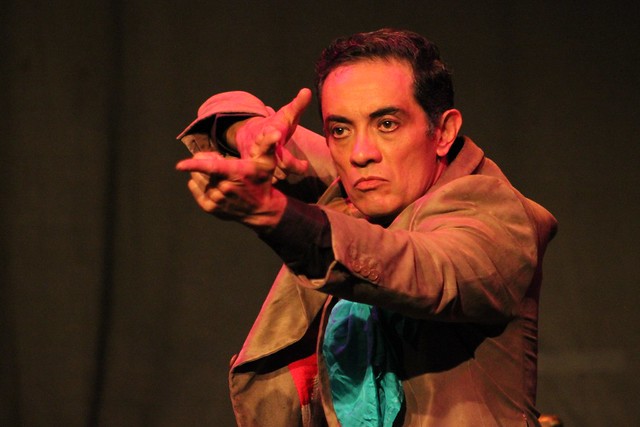 Michael Finnissy is Professor of composition at the University of Southampton and a past President of the International Society for Contemporary Music. His commissions include Red Earth BBC Proms (1988), Gedächtnis-­‐ Hymne Huddersfield Festival, November Festival Netherlands (2011). www.michaelfinnissy.info

Andrew G Marshall’s previous play, Caruso and the Monkey House Trial was short-­‐listed for ‘Best New Play’ at the Brighton Festival Fringe (2011), and The Guardian called Coming Around Again: “Impressive”. He is also the author of eleven books, and his work has been translated into twenty different languages. www.andrewgmarshall.com

Ignacio Jarquin studied music and theatre in Vienna, and has worked extensively in France and Germany. He recently completed two, self-­‐produced tours of UK theatres (playing over one hundred dates) comprising two plays about the life of the tenor, Enrico Caruso. He also sung works from Caruso’s extensive repertoire during the tour. ignaciojarquin.wordpress.com

Akiko Ono advises on movement and Kabuki theatre forms. Her dance work and film work have been screened at many film festivals and galleries, including: the Buenos Aires Dance Festival (2006), New York Dance Film Festival (2007), and Gallery Sora, Tokyo (2013). She has also worked at Vienna’s Inpulz Dance Festival. www.akikodanceproject.com

Philip Sugg (Miniature Theatre) is an artist and historian who specialises in theatre and puppetry design. He has worked in education, museums and galleries. His own show can be seen at www.suggsminiatureharlequinade.com.