“This project has come about as a result of my doctoral research at the University of Bristol, where – together with a team of three musicologists, a paleographer and historian – I am currently delving into the non-­‐pitch-­‐ readable manuscripts of the Old Hispanic Liturgy in an attempt to recapture something of this liturgy’s musical and aesthetic space for a modern, secular, audience.

MYISI, meaning initiation, is specifically inspired by the Palm Sunday ritual – one of the most important rituals within the liturgical calendar. With its inclusion of song, procession, choreographed movement and readings, and its overarching theme of initiation, the Palm Sunday ritual provided an interesting framework on which to base this piece of multidisciplinary music-­‐theatre that explores the broader concept of boundary and modern initiation rites” – Litha Efthymiou.

MYISI is divided into four sections. Each section takes its stimulus from a particular event within the Palm Sunday ritual, and is also closely connected to a parallel narrative: the process of cultural assimilation.

The screens and barriers that audience members will encounter throughout the performance represent the different levels of seclusion within the medieval cathedral where said ritual took place. They also symbolise the different boundaries that people have to overcome in order to become initiated into any group, gang, or society.

Please note: If you have been given an envelope, please follow the instructions on the card inside. 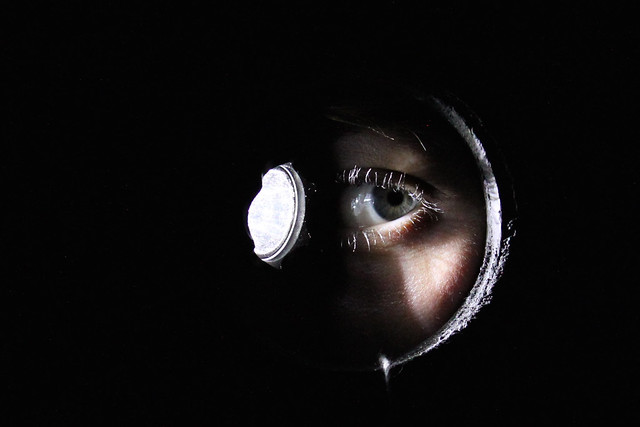 Litha Efthymiou held scholarships at Trinity College. She has received awards from ACE, Wellcome Trust, PRS and National Lottery, as well as commissions from festivals and organisations including IGF, NMSW and Kettle’s Yard and had her music performed in QEH, Kings Place and Sage Gateshead. Her music is published by Edition HH.

Jonathan James has conducted professionally in the States, Europe and the UK, and runs an Opera training course. As a writer, his libretti have been performed in the Royal Albert Hall as part of the Proms 2014, as well as with the RPO in Cadogan Hall. His main work now is as a music educator and workshop leader.

Tom Brown is co-­‐founder of audio-­‐visual performance duo Magnetic Foragers, who create immersive visuals for performance. Recent projects include three live multimedia shows with The Cabinet of Living Cinema and a site-­‐ specific video installation at Harrods. This is his second collaboration with Litha, afterParting (King’s Place, 2014).

Esmé Patey-­‐Ford trained at Mountview and is a founding member of Hyphen Theatre Company. Credits: Oh, the Humanity and Other Good Intentions (Tabard), An Enemy of the People (New Diorama), Asking Rembrandt (Old Red Lion), This Child (Bridewell Theatre), Games of Love and Chance (Edinburgh Fringe), Next Lesson (Pleasance).

Harriet Parker-­‐Beldeau is a dance artist. She obtained a first class degree at Trinity Laban and was awarded the Marion North Award. She has worked with choreographers including Simon Vincenzi, Rahel Vonmoos, Sivan Rubinstein and Charles Linehan in venues such as Sadler’s Wells, Bonnie Bird Theatre, Embrace Theatre (Dance4).

Felicity Latham is a recent music graduate of Bristol University. There, she was principal flautist of the Symphony Orchestra and Opera Society and collaborated with a variety of composers through the New Music Ensemble and Contemporary Music Venture. As a soloist, she has performed in venues including St George’s, Bristol.

Lizy Exell is primarily a Jazz drummer and leads Old Hat, an early jazz and swing band, which she established in her third year at Trinity College. She freelances with other bands on the swing circuit, as well as bands that explore music in other styles from rock to purely improvised music.

Chi-­‐Ling Lok is a pianist whose “artistic gifts are of the highest standard” – Roland Proell (International Schubert competition, Germany). As the Director and pianist of the contemporary music group New Sound China UK, she has curated and performed concerts at major venues including Kings Place, Bridgewater Hall and Blackheath Halls.

David Larkin studied under Ofer Falk and Darragh Morgan at Trinity College, where he discovered a passion for exploring contemporary music. He has since been involved in collaborations with numerous composers, premiering new works throughout the UK.

Ariane Alexander was awarded scholarships to study with Nancy Dahn at Memorial University and Stephanie Griffin at the City University of New York. She has performed all over the world, including at Carnegie Hall (New York), the Oriental Art Centre of Shanghai, and London’s Royal Festival Hall.

Cameron Smith is a recent graduate of Trinity College under Joely Koos. He currently freelances in and around London – where he is about to embark on a tour of recitals with pianist Madelaine Jones– and has performed with the Endellion Festival and English Chamber Orchestra. He currently studies under Tim Gill.