PANIC ROOM (the end of civilisation as we know it)

In four billion years, the sun will turn into a red dwarf, explode and die taking the whole solar system including the earth with it. The piece was created during a residency in Venice– a place that can be seen as one of the seats of European artistic achievement and yet, due to rising water levels, is sinking. Venice sinking seems to be an allegory of this inevitable cosmic event. When one visits the artistic treasures of Venice, one is aware of their fragility in this way and that, when it does eventually sink, many great works of art will be lostto us forever. In the same way, on a cosmic scale, all the artistic achievement of Man will evaporate in four billion years’ time. It’s really sad to think that one day no living being will be able to hear a Beethoven symphony or Bach cantata. The PANIC ROOM is an imaginary artistic Arc where the opera singer within knows that she will die, and so collects as much music and operatic mementos as she can and chooses one person to have one last conversation about music and art with, before succumbing to her fate.

Whilst there is nothing new about the ‘interview’, I wanted to explore the idea of the ‘sing-­‐terview’ and thus establish a character whose only mode of communication is singing. I like the idea of using operatic singing– initially developed to amplify the natural voice – in a very intimate way. The operator’s technique at first is quite bizarre and distancing, but slowly, during the sing-­‐terview, becomes accepted as the mode of sonic transport. There are set questions wherein cells of music have been composed and become embellished according to the direction the sing-­‐terview takes. PANIC ROOM seeks to explore the idea of a very private space made public, surveillance, and the interview form. 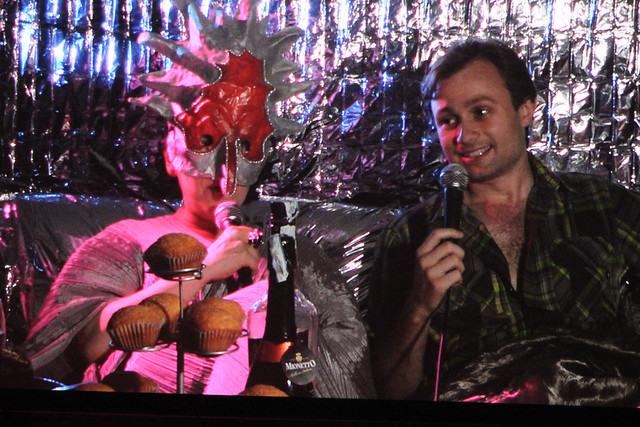