Third Hand began in 2012, after director Stuart Barker, designer Simon Bejer and puppeteer Darren East worked on British Youth Opera’s production of A Night at the Chinese Opera and – with musical director James Young – attended a puppetry and opera conference run by the Puppet Centre. Seeingthe exciting possibilities of combining these forms, we decided to put together a new performing company devoted to puppetry and opera. In 2013, we mounted a Triple Bill of short operas supported by the Rosemary Branch Theatre:

Falla’s Master Peter’s Puppet Show, Stravinsky’s Renard, and a newly commissioned adaptation of WS Gilbert’s short story, Angela, an Inverted Love Story – winning the Off West End Award for Best Opera. NJOGEL is our second première – an opera we aim to produce further in 2015; in the meantime, we are returning to the Rosemary Branch Theatre this autumn with an evening of song cycles and puppetry. – Barker (2014)

Shetland is a far-­‐away island that hardly anyone knows. It is hidden. We present a picture of Shetland that colludes in this hiddenness – a fictionalised, historically ambiguous, exaggerated version where there are no humans visible at all, only legendary creatures of Shetlandic folklore. Snippets of distinctive folk music float through the piece. We see Shetland only through the eyes of three interlopers who are engaged in colonial projects of varying poisonousness: two conflicting brothers with very different agendas and a nun who has battled against the island her entire life. The islands gradually weave their spell… Shetland, once part of Norway, was given to Scotland in 1469 as settlement of a monetary debt, yet the majority of islanders still do not feel Scottish. The folk culture and the local Scandinavian (now a dialect of English called Shetlandic) are of course all but lost. – Georgeson & Young (2014) 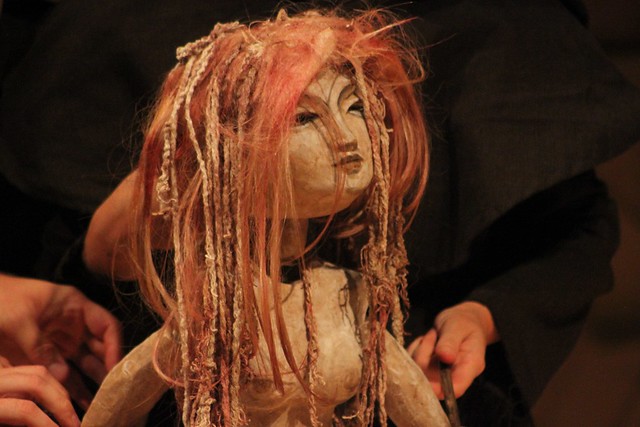 RCM trained pianist/composer/conductor James Young has fulfilled commissions from the PLG, EUCO and Phoenix Piano Trio, performs regularly at major venues such as Wigmore Hall and Purcell Room, is a member of Piano Circus and creates experimental and improvised theatre. You may also catch him conducting Tête à Tête’s very own Pop Up Operas…

Neil Georgeson is a writer, director, composer and pianist from the Shetland Islands. He came to London in 2001 to study piano and music at RAM. He has been commissioned to write libretti by Size Zero Opera and ThirdHand (Off West End Best Opera). With his group – the Ossian Ensemble – he curates concert events, directs new chamber opera and creates site-­‐specific promenade events incorporating theatrical elements and multimedia.

Stuart Barker is Director of Training and Productions for British Youth Opera, where productions include: Judith Weir’s A Night at the Chinese Opera, Stephen Oliver’s Euridice and, this September, Jonathan Dove’s The Little Green Swallow. He has directed twenty productions as Artistic Director of The Minotaur Music Theatre and is a founding member of Third Hand. www.stuartbarker.com

Darren East is a third-­‐generation puppeteer. He is Co-­‐Director of TouchedTheatre – directing shows including forthcoming Faust [Redacted] and Blue – and is currently curating Brighton’s new puppetry night Punched, as well as running numerous participatory and community Arts projects. He is a founder of Unpacked Theatre and Third Hand. www.darreneast.co.uk

Timothy Nelson is currently a member of the Royal College of Music International Opera School, where he studies under Peter Savidge. Operatic roles include: Title Role Le Nozze di Figaro, Ramiro L’Heure Espagnole and Don Pomponio La Gazzetta. Away from singing, Timothy is a keen golfer.

Fleur de Bray trained at the Royal Northern College of Music – supported by The Baroness De Turkheim Vocal Scholarship – and is currently studying at the Wales International Academy of Voice under Dennis O’Neill CBE. Recent operatic roles include Governess The Turn of the Screw (Opera Holland Park), as a Christine Collins Young Artist.

Oliver Marshall studied at Warwick University and the RCM. He has worked with Olivier award-­‐winning company OperaupClose and appeared in Third Hand’s Off West End award-­‐winning Puppet Opera Triple Bill. A keen performer of contemporary opera and theatre, this is his second year at Tête à Tête: The Opera Festival. He is also appearing in Opera Kitsune’s Spirit Harbour at this year’s Festival.

Aurora Adams is an actor-­‐puppeteer. Trained in puppetry at the Little Angel Theatre, Aurora also has experience in classic theatre, musical theatre, dance and aerial. She recently appeared as the Virgin Mary inConversations With Mary, and as Spring in a movement piece in the Macmillan Garden at Hampton Court Flower Show.

The Dorty Letters of James Joyce