Sacred Mountain. Incidents in the Life of Queen Nanny of the Maroons

SACRED MOUNTAIN: INCIDENTS IN THE LIFE OF QUEEN NANNY OF THE MAROONSfeatures the first of Shirley J. Thompson’s iconic historical heroines from a series of chamber operas where she unearths submerged narratives of heroic women. Queen Nanny of the Maroons is one of the greatest eighteenth-­‐century military strategists and spiritual leaders of all time. She led the Windward Maroons of Jamaica into fierce battles with the British during the First Maroon War (1720-­‐1739), ingeniously devising guerrilla tactics that repeatedly thwarted the militia. By 1720, Queen Nanny controlled an area in the Blue Mountains consisting offive hundred acres of land granted to runaway people enslaved by colonialists. She is Jamaica’s Buddicea and, as such, a Jamaican national heroine, featured on the Jamaican 500 dollar note. SACRED MOUNTAIN is a psychological exploration of the woman inside the warrior, employing a powerfully enigmatic mix of contemporary vocal, spoken word artistry and orchestral music with dance. 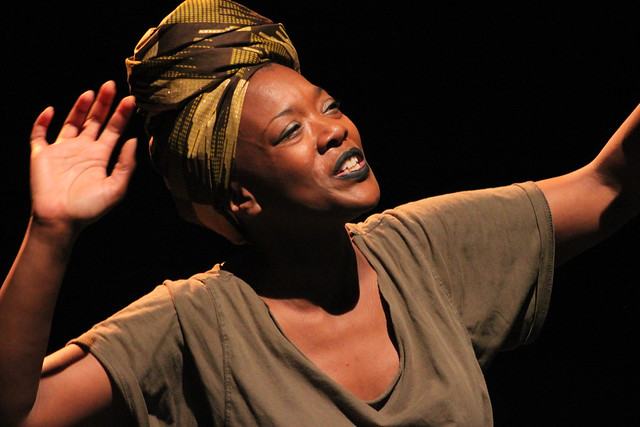 Dr Shirley J. Thompson is a multi-­‐award-­‐winning and internationally renowned composer who has composed a vast number of works for concerts, stage and screen. She is the first woman in Europe to have composed and conducted a symphony – New Nation Rising, A 21st Century Symphony – within the last forty years. She serves as a Reader at the University of Westminster.

Dane Hurst – an award-­‐winning dancer and choreographer – trained at, and dances for Rambert. Recent works include MAMA’s award-­‐winning Anima Mundi, in collaboration with video artist Kira Zhigalina. He recently acted in and choreographed the film Primative from director Tom Rowland. He received the Best Male Dancer of the Year Award at the Critics Circle National Dance Awards, UK in 2014.

Abigail Kelly is a celebrated soprano whose operatic roles include Amour in Rameau’s Pymalion, Helena and Juno The Fairy Queen and Belinda Dido and Aneas. Abigail has also toured internationally, performing as a featured artist with Opera South Africa and the Johannesburg Philharmonic Orchestra at the Capital Arts Festival, South Africa State Theatre. Abigail has performed a number of roles with the English Touring Opera over the last five years.

Cleveland Watkiss is a British virtuoso vocalist, actor and composer. He was the winner of the London Jazz Awards for Best Vocalist in 2010 and voted The Wire/Guardian Jazz Awards Best Vocalist for three consecutive years. He is a co-­‐founder of the influential Jazz Warriors big band and is Co-­‐director of Warriors International.

Orphy Robinson is a British vibraphonist and multi-­‐instrumentalist who also plays the saxophone, trumpet, drums, piano, marimba and steel pans. He has written music for television, film, theatre, opera and contemporary classical concerts. Robinson works across a variety of eclectic musical forms including jazz, free jazz, free improvisation, jazz fusion and funk music. He is Co-­‐director of Warriors International.

Mark Kavuma is fast becoming one of the best young trumpet players on the British jazz scene. Having been voted best soloist at the very first Essentially Ellington competition in the UK, Mark managed to land himself two prestigious gigs as guest soloist with Wynton Marsalis and Jazz at Lincoln Center Orchestra in 2014.