Berlin, 1961. Erected overnight without warning, the Berlin Wall fractured the city. One month after the wall’s construction, Schutzwall follows two sisters meeting either side, to wait for nightfall and their chance to be reunited.

Berlin, 1961. The newly erected Berlin Wall has fractured the city. Put up overnight without warning, residents awoke to find themselves divided from their families, friends and livelihoods. In the following years thousands of refugees would attempt to escape over the wall into West Berlin. Set one month after the wall’s construction, Schutzwall tells the story of two sisters who meet either side to wait for nightfall and their chance to be reunited.

The opera stands as a reminder of the negatives of dividing people. 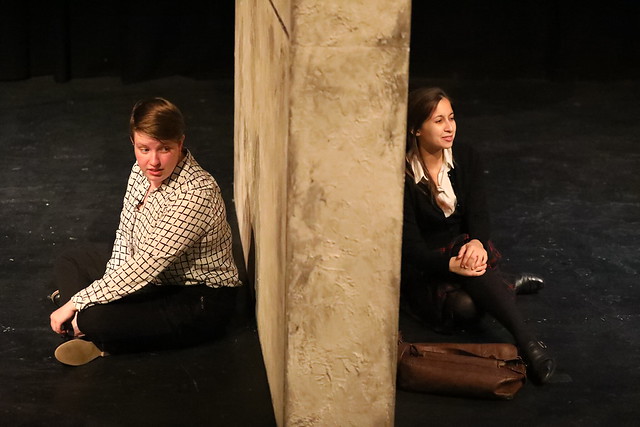 5:00pm – 6:00pm : Proposition for a Conversation About a Silent Opera on Tehching Hsieh

Jonathan Higgins is a composer and sound artist from Surrey. He has recently completed an MA in Sonic Arts at the University of Sheffield and in September, will begin a PhD at City University London researching the plasticity of noise. Jonathan works with a variety of different media including: fixed electroacoustic composition, mixed instruments and electronics and sound installation. Musically his work focuses on an exploration of noise as a compositional tool. His music has been performed and prized both nationally and internationally.

Mimi Doulton is a British soprano and postgraduate scholar at the Guildhall School of Music and Drama, studying with Gary Coward. In 2015 she graduated with First-Class Honours in Music and Languages from King’s College London, where she was a choral scholar.

Specialising in contemporary music, Mimi has performed new works at the Wigmore Hall, Club Inégales and as part of Rough for Opera. She was involved in the development workshops for Philip Venables’ award-winning Royal Opera commission 4.48 Psychosis and has recently collaborated with Mahogany Opera Group on their ‘Snappy Operas’ education project. Her interpretation of Judith Weir’s one-woman opera King Harald’s Saga has been enjoyed by audiences in schools, nightclubs and art galleries alike, as well as at London’s Wigmore Hall and St. John’s Smith Square.

Mimi is a 2017 Royaumont Académie Voix Nouvelles scholar, and will be performing in a concert curated by Thomas Adès as part of the London Symphony Orchestra’s ‘This is Rattle’ project in September.

She is grateful to the Guildhall School Trust, the Humphrey Richardson Taylor Trust, the Mario Lanza Educational Foundation and private donors for their generous support of her studies. If you are interested in supporting her continued studies, please get in touch via www.mimidoulton.com

Ella Taylor is currently studying for a Masters in Performance at the Royal Academy of Music under the tuition of Elizabeth Ritchie and Andrew Smith, having graduated from the University of Sheffield with a First-Class Honours Degree in Music.

Ella has a particular interest in performing new music. She has recently performed at the Leeds Lieder Festival Composer and Poets Forum as part of the Day of Song, as well as premiering Jonathan Higgins’s Schutzwall at Tête à Tête:The Opera Festival.

Ella is generously supported by the Sheffield Church Burgesses Trust, the Josephine Baker Trust and the Parepa-Rosa Prize, awarded by the Royal Academy of Music. www.ellataylorsoprano.co.uk

Lily German is an Artist and Set Designer currently undertaking a 2-year Residency at Colfe’s School in South London. Fragility is a state that Lily attempts to compromise through clay sculpture, writing, performance and the voice. Since graduating in Fine Art from Goldsmiths College, University of London, Lily has exhibited in both solo and group shows in London. Most recently in July 2017 showing performing clay forms as part of S I N K at Safehouse 1, Maverick Projects. Continuing research projects include working with Crossness Engines Trust and running educational workshops alongside a research-based studio practice.