After watching Wagner’s Parsifal at the Royal Opera House in London in 2013, Helen Parker-­‐Jayne Isibor looked around and said, “I’m going to pidgin up this entire situation”, and so the idea of SONG QUEEN: A PIDGIN OPERA was born. SONG QUEEN: A PIDGIN OPERA is the world’s first Nigerian Pidgin (broken English) opera. It explores Nigerian Pidgin English, as well as other Pidgin languages from around the world. Helen’s aim is to promote peace, cultural exchanges and artistic experiences in a refreshing way, while challenging notions of ‘high’ and ‘low’ art. Blending the rich African tradition of storytelling with Nigerian Pidgin English and elements of Western classical music, she presents an Afro-­‐futuristic concoction, delighting new, diverse and existing opera audiences. 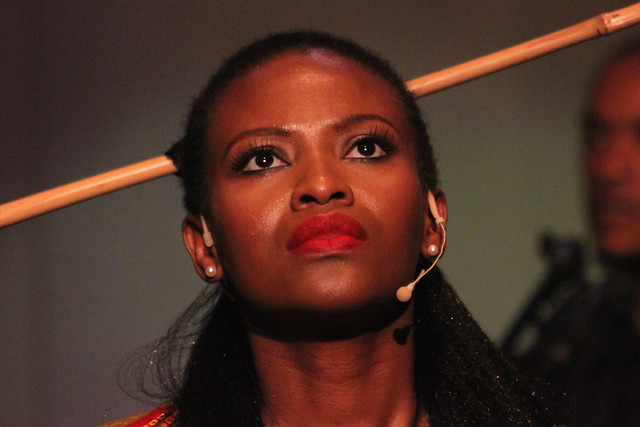 Josephine Akinde is a Nigerian-­‐born singer and contemporary and street dance choreographer. Josephine works with young adults – helping them to develop their skills – and strives to create platforms for motivation and expression through the arts. She recently performed at the Royal Albert Hall and Barbican Centre.

Francis Angol is the Artistic Director of Movement Angol Dance Company, and is a dancer/performer, choreographer and somatics movement educator with 22+ years experience in dance and performing arts. He has, over the years, contributed to the enrichment of British dance culture and the lives of many individuals.

Marianne MarpLondon’s work spans the known and the unimaginable. It cuts through the boundaries of traditional and contemporary visual art. It merges pop culture with social commentary and personal experiences with collective narratives, which ends somewhere between reality and fantasy.

Claire De-­‐Graft is a Make Up Artist & Hair Stylist with 15+ years experience in make-­‐up artistry. Since graduating from London College of Fashion, Claire’s work has been published in Tatler, Harpers Bazaar, Elle and Vogue. She is currently the Beauty & Hair Director for OK! Nigeria Magazine.

Martina Isibor is a gifted self-­‐taught multi-­‐instrumentalist, singer-­‐songwriter, actress and dancer whose mesmerising performances have graced both the stage and screen. She has performed for HRH Prince of Wales, toured the globe and stared in hit West End shows such as Disney’s The Lion King and Thriller Live.

Hana Teklom, an art consultant specialising in contemporary African art, has an MSc in Business Psychology. Having worked in the financial industry, she studied at Christie’s before setting up Lasmara Ltd. Hana has been involved in numerous art projects in Africa and Europe, organising exhibitions, auctions and private collections.

Bridget Perise is a dynamic singer-­‐songwriter with a musical theatre and acting background, a degree in English and Media Performance and a diploma in Marketing. She has 15+ years experience in music management, managing projects and producing events and conferences for international and boutique companies.

Dylan Epega modelled for Marks & Spencer and Diesel Jeans as a child. Having just completed her A Levels in Spanish, English and Business Studies, she will be studying for a Law degree at Queen Mary University of London. Dylan is the singer and bassist of rock band Panic State.

Baba Jallah Epega is a businessman, philanthropist and Chairman of award-­‐winning global events company emc3. Baba first trained to sing at The King’s School, Canterbury. A graduate of Mathematical Economics and Spanish from Queen Mary University of London, he continues to inspire through the Richard Coker Foundation.

Christine Buras (American soprano) is a versatile and experienced performer of a wide range of repertoire including early music, opera and art song. She particularly enjoys performing oratorio and recently performed Mozart’s Exsultate Jubilate (St Martin-­‐in-­‐the-­‐Fields). She is a founding member of Ensemble x.y.

Katie Coventry (Scottish mezzo-­‐soprano) graduated with first class honours in History and Music from Royal Holloway, before arriving at the Royal College of Music, where she received her Masters of Performance with distinction. Katie is an avid recitalist and concert performer and has extensive Oratorio experience.

Simon Chalford Gilkes (Australian-­‐born lyric tenor) is a graduate of the Royal College of Music, where he received a Masters in Vocal Performance with distinction in 2013 as a Cuthbert Smith Scholar. He has featured as tenor soloist on numerous occasions including with the Sydney Symphony Fellowship.

Richard Olatunde Baker, born of English-­‐Nigerian parentage, began his musical life aged 11 as a self-­‐taught guitarist, later trained by traditional Master drummers in the early 1990s. He specialises in Yoruba talking drums, sakara, ashiko and other African percussions. He is also an accomplished studio engineer/producer and teacher.

Adam Coney is a graduate of Contemporary Composition from Newcastle University and a guitarist with a keen sense of production aesthetic and progressive sensibilities. Primarily associated with prog-­‐jazz group Morviscous, he has also worked with various artists through Trestle Records. Adam continues to tour and record worldwide.

Diabel Cissokho (Senegalese musician) is part of the great line of Cissokho griots. He started playing the kora from an early age and has gone on to tour internationally and perform with artists such as Baaba Maal, Robert Plant and his family’s band Bannaya.

Cristina Prats-­‐Costa moved to London from Spain to study at the Guildhall School of Music and Drama, where she obtained a BA (Hons) in performances. She graduated in 2013 with a Master of Arts in Performance(MA) and the LRAM teaching diploma. She plays 1st violin, Alauda Quartet.

Rhoslyn Lawton began her musical studies at the age of 5 and, at the age of 16, took up a place at Chetham’s School of Music in Manchester. She has performed in many of the leading concert venues across the UK. She plays viola, Alauda Quartet.

Elena Cappelletti recently completed her Masters degree at the Royal Academy of Music in London. In 2010, she was awarded first prize in the Rotary Club competition for the best young graduate in a string instrument and continues to tour in Europe. She plays Violoncello, Alauda Quartet.