The Ant and the Grasshopper

Strekoza i Muravej (Grasshopper and Ant) is a re-imagining of the classic Russian fable following the lives of the extravagant Strekoza and the dutiful Muravej. Our story is Russian, the meaning is universal. Audiences will empathize with the characters through the soul of the music and the poetry of the words.

Scene One: It’s been a glorious summer for Strekoza (Dragonfly) as she leads a cheerful and frivolous life surrounded by her partying friends, while Muravej (Ant) works diligently in his tiny flat. Tired from extraneous partying, a mutual friend staggers to visit Muravej. As the friend tries to persuade Muravej to drink the night away, Muravej confesses his love for Strekoza and is ridiculed mercilessly.

Scene Two: Autumn. Strekoza continues her streak of lavish living only to be interrupted by a maleficent banker who, proud of her destructive power, threatens Strekoza with her deepening debt. Disgusted by Strekoza’s poverty, her friends leave. Soon after, Strekoza follows after her friends, while the banker visits Muravej to have him sign the contract for a new home…

Scene Three: Frost covers the pavement as the wind wails through the streets. Strekoza stumbles home from another night out only to be confronted by a notice from the bank. Anxiously, she reads that her credit has expired and she has been dispossessed. Leaving her home in a flurry, she takes to the bitter cold streets, alone for the first time. Meanwhile, Muravej enters his new home only to discover that it once belonged to his love, Strekoza. He rushes out to find her, as he comes to understand the meaning of solitude. 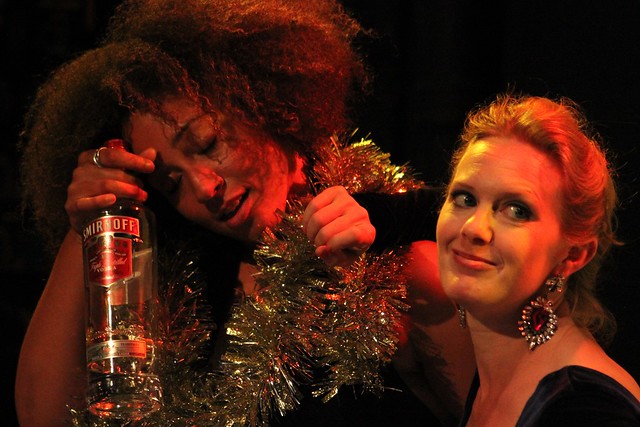 Brian Hosefros received his Masters in Composition in 2011 at Goldsmiths, after studying under renowned composer Dmitri Smirnov, and was accepted onto a one-­‐year program at Moscow Conservatory. In 2012, Brian was Music Director/Composer for Gracia Lorca’s Yerma (Baron’s Court Theatre), which received a five-­‐star review from RemoteGoat.

Born in a native Russian family in Latvia, Vadim Yurchenko witnessed the collapse of the Soviet Empire (in the early 90s) and subsequent democratization of society, bringing both opportunity and tragedy. He wrote poems from early childhood, published in annual literary compendiums since 1997.

Martyna Lyko is a theatre and opera director; trained across Europe, she is known for her conceptual approach to opera and frequent use of symbolism. Martyna’s recent work includes: Vores’ No Exit, a silent, rhythmic production based on Büchner’s Woyzeck, Adult World (based on Wallace’s Brief Interviews with Hideous Men).

Originally from Russia, Marianne Raye studied Graphic Design at Ulyanovsk College of Art and Design. From 2008, she continued studies in London, where she gained experience in Design, Printing, Illustration and Fine Art. Currently, she is doing an MA in Children’s Book Illustration at Anglia Ruskin University.

A recent graduate from RAM, Alistair Sutherland has been a Christine Collins young artist with Opera Holland Park for two years. He has worked extensively with Opera Up Close – recently singing the role Dulcamara in their critically acclaimed L’elisr d’amore and often performing Schaunard in their award-­‐winning La bohème.

Chloe Hinton studied at the University of Manchester, before continuing postgraduate training in Dublin. She has sung at ENO, Glyndebourne, Opera Holland Park, and Longborough Festival Opera, and is an alumna of the Opera Theatre Company Young Associate Artists, ENO Opera Works, and the Christine Collins Young Artists Programme.

American mezzo-­‐soprano Christina Gill recently relocated to the UK where roles include: Carmen, Maddalena, Elvira, and Suzuki. US performances include: Title Roles in Carmen, Thérèse, Margaret Garner and Babette’s Feast, as well as Charlotte Werther. She will perform Donna Agnes The Sleeping Queen (Wexford Festival Opera).

Helen Whitaker graduated with a Masters degree (distinction) from Trinity Laban, where she studied under Anna Noakes. She is supported by a Leverhulme award, the Ann Driver Trust, and TCM Trust. Helen won the Harold Clarke Woodwind and Directors Prizes. Helen performs regularly with Lontano and The Harrison Ensemble.

Krystyna Misiukiewicz completed her music education in Poland and Italy. She has performed numerous operas across Italy – where she has developed a passion for this particular genre. She regularly performs concerts with reed trio Bialytaly, sings in a parish choir and teaches oboe/cor anglais privately at home.

Chris Goodman graduated from RCM in 2010, where he studied under Timothy Lines and Barnaby Robson. That year, he won the Steven Trier Prize for Bass Clarinet, and a place on the ENO Emerge Scheme. He has a varied career as a chamber musician and orchestral player and is currently an artist with Live Music Now.

George Sleightholme graduated with Distinction from RAM in 2010, since then he has been Principal Clarinet of Co-­‐Opera Co. George is a Live Music Now artist, and writes and performs original music with theIyatra Quartet. George has recorded music for film, adverts and theatre, and composers including Rick Wakeman.

Ingrid Clement studies violin with Radu Blidar at the RCM. She made her debut as a concerto soloist with the Endcliffe Symphony Orchestra in 2005, and has performed with conductors such as Vladimir Ashkenazy, Vladimir Jurowski and Ed Gardner, in addition to masterclasses with Nicola Benedetti, Franco Mezzena and Peter Cropper.

Anne Kim is currently on the Master of Music in Performance (fast-­‐track) programme at the RCM and has been a soloist with the Nelson Symphony Orchestra and Michael Monaghan Young Musicians series. She performs regularly in the elderly ward at St. Mary’s Hospital (Paddington). Soloist in London Korean Music festival 2013.

Born in 1981 in the USSR, Soviet Latvia. Jeremy Gurchenko started violin at the age of six. Won his first National Music Competition at the age of eight. Soon after awarded scholarship and entered a class for musically gifted children. He is a member of the London International Orchestra and I Maestri Symphony Orchestra.