Frances M Lynch and electric voice theatre (evt) have been collaborating with composers Alejandro Viñao and Andrew Lovett for many years. The City Weeps represents new developments for all of us in vocal techniques, drama and live electronics. Viñao produced a spoken drama, contrasting with live singing, transforming seamlessly into recorded sounds: – a marketplace, a call to prayer, TV news broadcasts, and a variety of unexpected musical styles. In case you are wondering, Frances is using an electronic light conductor to help her sync exactly with the computer track. Lovett pushes Lynch’s extended voice, and places it in a surround sound electronic space, peopled with unseen characters with whom she interacts. You’ll hear the voices of the sentinels appear at four corners of the devastated city in which you are sitting. Tête à Tête: The Opera Festival has given us an unmatchable opportunity to premiere these works in London and to re-assess and develop our production and marketing with the help of their wonderful staff.

The City Weeps comprises two mini operas for solo soprano and electronics. They encapsulate the harsh reality of conflict, and highlight not only the ability of humanity both to survive invasion and devastation but also to perennially inflict the same wounds across generations and peoples.

Commissioned by A.Devantgarde Festival; the final version premiered by evt in Grenoble.

‘The text is mostly spoken, occasionally sung, and fits tightly into a rhythmic structure, provided by the electro-acoustic score. The piece explores the forceful intervention of the strong and powerful to ‘protect’ or ‘liberate’ the weak. The focus is on the personal experience of a woman who is at the receiving end. Though inspired by Eliot Weinburger’s book, ‘What I heard about Iraq,’ the dramatic situation developed in my text is a comment on intervention in general, not exclusively on the war in Iraq.’ (Viñao)

Commissioned by evt with support from ACE, Britten-Pears Foundation and the European Association for Jewish Culture.

‘The Book of Lamentations’ consists of five poems detailing the destruction of Jerusalem in 586BCE. These are re-imagined as stages of grief experienced in the aftermath of a traumatic experience: shock, anger, numbness, despair and finally acceptance. The text mixes Hebrew and English; Echah … Alas. The Hebrew letters – alef, bet, gimmel – are used to reflect the acrostic nature of the poems and the musical tradition of including these letters in the setting.’ (Lovett) 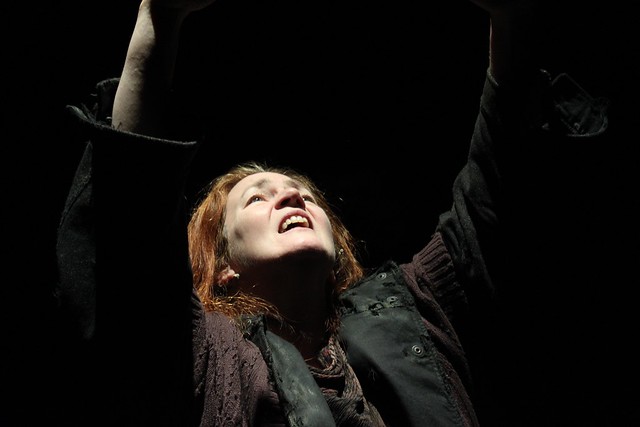 electric voice theatre is celebrating 30 years producing new music which features electronics and extended voices in a theatrical context, with outreach work as our central core. We tour worldwide performing pieces by Weir, Berio, Kagel, Cage, Finnissy.. etc… evt is an ensemble of 12 singers, with sound, lighting and stage designers.

Frances M Lynch, is an itinerant soloist (IRCAM, Radio France, ZKM,Gothenburg Opera, Cervantino -Mexico, Japan,….) noted for collaborating with composers, writers, poets, directors, academics, scientist, dancers and the general public. She is an associate member of Sond’Ar-te Electric Ensemble, Lisbon; performs dangerously interactive children’s concerts with Big Mouth Piano Tales; composes; teaches singing, and can accurately reproduce the sound of trumpeting elephants. http://francesmlynch.wordpress.com/ Alejandro Viñao has written music for a wide range of musical genres including opera, electro-acoustic music-theatre, multimedia works and film. He has received a number of international prizes such as the Guggenheim fellowship in composition, the ‘Golden Nica’ Prix Ars Electronica and 1st Prize at The International Rostrum at the UNESCO World Music Council, and his works have been performed internationally by leading ensembles and orchestras.

Andrew Lovett is a composer with a strong interest in opera and music-theatre, especially combined with electroacoustic technology, who has forged a strong relationship with evt. Don’t Breathe A Word, an opera project with writer Fraser Grace, is currently in development with the ROH2. Lovett also recently scored a feature-film, Wreckers, featuring Lynch’s voice, directed by Dictynna Hood, released this year.