Age of Anxiety’s newest and most exciting challenge comes in the form of THE CROCODILE – an opera written by Llewelyn ap Myrddin. Originally composed for a student performance at the Guildhall, this particular opera has been eighteen months in the making. After a month or so of reading many short stories, Llewelyn chanced upon a gem from Dostoyevsky, upon which THE CROCODILE has been based. This new production will see a fully realised imagining of Llewelyn ap Myrddin’s piece.

This opera tells the story of the showing of a great crocodile at a high society party in St Petersberg University, at the turn of the twentieth century. Surrounded by his acolytes, Dr Philip Philipovich is hard at work finalising details for a pre-­‐public press conference with his chums Semyon and Ivan, when disaster strikes and Ivan is eaten whole by said Croc! What are Philip and Semyon to do? How will they explain what has happened, and how will they get it past Ivan’s diva wife Elana? Musically, THE CROCODILE is a wonderful example of Shostakovichian writing, infused with samba, tango and soul, that nods to both Tchaichovsky and Angelo Badalamenti. An exciting and innovative musical fusion, THE CROCODILE is a sharp and witty study of what happens when the logic of progress and culture starts to crumble around us, and we refuse to accept our fundamental desires. Puppetry plays an important role in the production. The Crocodile appears as both a puppet (conjured as if from a child’s dream) and a performer. 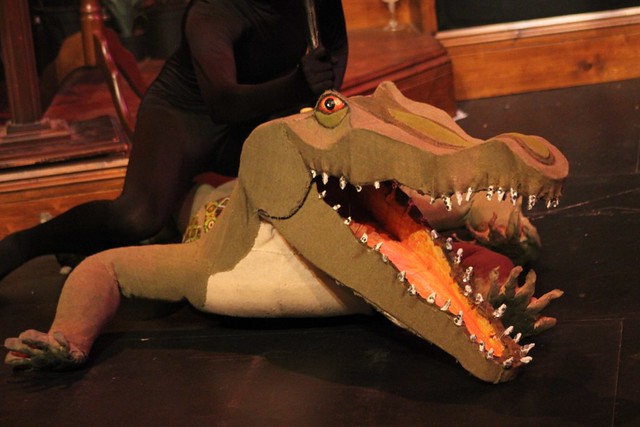 Anne Mayer is a freelance publicist. She has worked with London Contemporary Dance (The Place), Opera North, the National Theatre, the Young Vic and the Philharmonia Orchestra, and has spent nine years running press at the Royal Court. Since going freelance, she has worked for a wide variety of theatre companies.

Alex Sutton is a director of opera, theatre, musicals and film. He’s worked in most of the major British opera houses, the Young Vic and the National theatre. He has also worked as a curator, producer, production manager, choreographer, stage manager and designer. Contact him for a CV on a.r.sutton@hotmail.co.uk.

Alexander Beck graduated from Mountview Academy of Theatre Arts in 2009 with a BA (Hons) in Musical Theatre. This is Alexander’s third show with director Alex Sutton. Alexander is currently workshopping John Cameron’s new musical 1916, which is to be re-­‐lived later next year.

London-­‐born Jane Webster made her solo operatic debut at the ROH andhas sung over 25 Principal roles across Europe and the UK. Moving into West End Musicals, Jane has appeared in Phantom, and sung 110 performances as Mother Abbess The Sound of Music (London Palladium).

Michael Leopold is a theatre and costume designer with a flair for production management. Credits (whilst in training) include: Privates on Parade and Peter and Alice (Chris Oram, Design Assistant, Noel Coward), The Hanging Garden, The Taming of the Shrew and Twelfth Night (Michael Pavelka, Design Assistant, tour and Abbey Theatre).

Graham Neal has studied at the University of Surrey and Trinity College of Music, and on the Knack opera course at ENO. He has performed many leading operatic roles and is a well-­‐established oratorio, concert and choral singer. Graham has recently returned from the Iford Arts Festival, where he featured in Acis and Galatea.