The opera THE DOLL BEHIND THE CURTAIN is based on the short story of the same name by the revered Iranian writer Sadeq Hedayat (1903-­‐1951). Hedayat was Iran’s first modernist writer. Though there are echoes of Edgar Allan Poe and Franz Kafka in his profound and unsettling fiction, his vision and his voice are unique in literature. THE DOLL BEHIND THE CURTAIN is a modern masterpiece exploring loneliness, the mysteries of human sexuality and the clash of cultures. Amir Mahyar Tafreshipour’s opera, premièred here this week, is the first Iranian opera ever to be performed in England. Tafreshipour has created an original and challenging work of musical theatre, drawing from the culture of his native Iran, while exploring themes that are universal.THE DOLL BEHIND THE CURTAIN probes the troubled psyche of an individual caught between tradition and modernity, between duty and desire.

The setting is Le Havre and Tehran during the 1930s. Mehrdad, a shy, introverted young Iranian, has completed his studies at a lycée in Le Havre. In the days before his return to Iran, he discovers a beautiful mannequin in a junk shop. For the timid Mehrdad, this alabaster doll becomes an object of obsessive desire. He buys it from the shop’s sinister owner, Tombeau, believing that he has found a beauty that is flawless and unchanging – a passive object of adoration with which to share his secret life. Returning to the family home in Tehran, alienated from his parents and his adoring fiancée, Bita, Mehrdad shuts himself away in his room with the doll. But the inanimate mannequin is no longer the passive recipient of Mehrdad’s adoration, but a demanding mistress. Bita secretly visits Mehrdad’s room to confront her rival. There she hatches a desperate plan to recapture Mehrdad’s love. 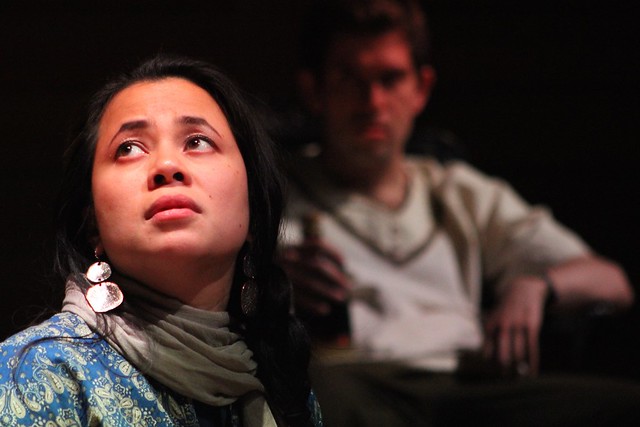 Amir Mahyar Tafreshipour is an award-­‐winning composer, gaining first prize at the Biennial Competition for New Music at Tehran University, Iran and the silver medal for outstanding achievement at Trinity College of Music, London. Commissions include a Harp Concerto for the BBC Symphony Orchestra conducted by Pascal Rophe. www.tafreshipour.com

Dominic Power is a radio dramatist and librettist. With Andrew Hilton, he has edited performance texts of Shakespeare for Shakespeare at the Tobacco Factory, Bristol. He has written the libretto for Peter Wiegold’s opera Brief Encounter and for End of the Line, a musical installation by Peter Wiegold.

Darragh Morgan (Irish musician) is violinist with The Fidelio Trio, has led Ensemble Modern, the London Sinfonietta and BCMG, and has recorded over fifty albums of new music. Darragh’s conducting engagements include Cyprus Chamber Orchestra, KZN Philharmonic and Johannesburg Festival Orchestra. Throughout 2004, he was Artistic Director of Baroque 2000 in South Africa. He regularly directs ensembles atthe Royal College of Music and Guildhall School of Music & Drama. www.darraghmorgan.com

Maya Sapone (director and soprano) is an extremely versatile artist. Her areas of activity range from performing in operas and musicals to singing on soundtracks for film and TV. A career highlight was playing the role of Lady Thiang in the UK Tour of The King and I. After several appearances at Tête à Tête: The Opera Festival as a singer, this performance of THE DOLL BEHIND THE CURTAIN represents her directorial debut. www.mayasapone.co.uk

Andrew Hilton is the Director of Shakespeare at the Tobacco Factory, which he founded in Bristol in 1999. In the 1970s, he was an Associate Director of the Mermaid Theatre. He has also spent many years as an actor, at the National Theatre, the Bristol Old Vic, in Radio and on Television. www.sattf.org.uk

Thomas Humphreys (baritone) studied at the Royal Academy of Music. He made his debut with Glyndebourne Touring Opera as Flora’s Servant in La Traviata and performs often with Glyndebourne, Opera Holland Park and English Touring Opera. In competition, he most recently won the Thelma King Award. Thomas is an avid recitalist, often performing with his wife Raya Kostova in venues across the UK and Europe.

Jessica Hill (dancer) trained at Tring Park School for the Performing Arts. Before graduating, she worked as an apprentice with Ballet Theatre UK, following her apprenticeship with the company she went on to become a principal with the company and perform roles such as the Black Swan and the Little Mermaid.