The Hive fuses verbatim interviews with a scorching operatic score to explore our fascination with serial killers – from grim tales to the real thing; from the first act of murder to the protracted effect of psychopathic darkness. A story as beguiling as it is shocking.

The Hive was inspired by Carole Hayman’s research as a Fellow at Kings College London – a study of women who commit serial murder. This became a 4-screen video installation of verbatim interviews with those intimately connected to killings. Funded by The Wellcome Trust the work was shown at Fabrica Gallery during the 2008 Brighton Festival.

The darkness had to be left alone for a while, but Carole returned to the project a few years later with a workshop at Out of Joint Theatre Company. From that came The Hive libretto – the title from a forensic psychiatrist who said in an interview, ‘Women kill close to the hive’.

Shortly afterwards, Carole enticed Harvey Brough, a musician and composer whose work she loved, to write the score. The Hive words and music aim to address some of human nature’s darkest depths, yet move rather than horrify, while keeping us emotionally charged. Quite the challenge!

A workshop showing of part one was seen last summer at Arcola Theatre’s Grimeborn Festival, funded by Tête à Tête and directed by Bill Bankes-Jones, where it was very well received. This evening’s presentation is also a work in progress, with extracts from Part Two. It takes place in a forest – perhaps The Forest of Arden – where archetypal characters wander. Little Red Riding Hood, on her way to visit her Grannie, is abducted by Hansel, Gretel and the Big Bad Wolf, who are all partying in their Gingerbread House. The Huntsman cannot save her, though he does his best. Everyone touched pays a price – no one escapes. Carole Hayman 2017

The Hive from Tête à Tête #2 on Vimeo. 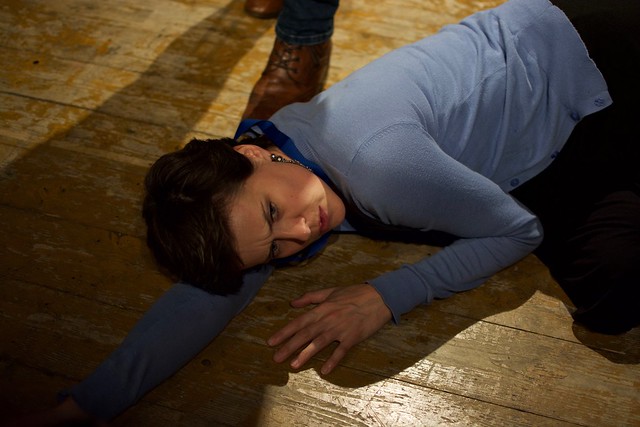 Carole Hayman is a writer, producer and director. She was a founder member and director of the Joint Stock Theatre Company and an Associate Director of The Royal Court Theatre where she directed many World Premieres. Her Radio and TV work includes hit series, Ladies of Letters, The Refuge with Sue Townsend and Rides, the first all-female TV drama. She also makes and presents podcasts and documentaries.

Marcia Bellamy received her MA Hons in Seattle and toured as Carmen (US) and in Kurt Weill’s Happy End (Canada) Her European debut was at Deutsche Oper Berlin where she was as soloist for 8 seasons. In the UK she played Suzuki in Madam Butterfly (Royal Albert Hall) and multiple roles in the new operetta, Bouffe! (RedBlonde Productions). Last month in Lewes Festival of Song she performed Lieder eines Fahrenden Gesellen and sang Zevka in Janacek’s Diary of One Who Disappeared, directed by Susannah

Waters. Marcia is Voice Tutor and Associate Lecturer in German Language and Repertoire at University of Chichester marciabellamy.co.uk

Ted Schmitz is a member of the international ensemble Nico and the Navigators based in Berlin, with which in 2017/18, Ted will sing an all-Schubert staged concert in BOZAR Brussels; Elbphilharmonie Hamburg, Konzerthaus, Berlin among others. Highlights include his work with Seattle Opera, Opera Bellas Artes Mexico City, Bregenzer Festspiele, Aldeburgh Festival, Glyndebourne and Covent Garden.

Rebecca Leggett is an undergraduate studying with Alison Wells at Trinity Laban. Opera highlights include Flora in Turn of the Screw (Britten) for Opera di Firenze 2015 and Glyndebourne Tour 2014 (cover) and Charlotte in the world premiere of Banished (Stephen McNeff). Rebecca is a member of Genesis Sixteen 2016.

Alexander Jasper is a choral scholar at King’s College, London, where he is student president of the music department. Also a clarinettist, Alex recently performed Kreutzer’s Concerto for Two Clarinets. His most recent opera performance was an energetic display of galloping as a reindeer in Matthew King’s The Snow Queen!

Robert Brooks is a baritone, conductor and composer based in Manchester. As well as recital and concert appearances, he directs the Preston Cecilian Choral Society, the Manchester Singers and the Abney Orchestra. He is this year a member of the National Youth Choir Fellowship – an octet of exceptional young singers selected to form a flagship ensemble for the National Youth Choirs of Great Britain.

He collaborated with playwright Lee Hall, on an oratorio, Valete in Pace (2004), and a community opera, Beached (2011 Opera North). His opera developed by ROH II Opera Genesis project – Stumbling over Infinity (2007), with visual artist and librettist Roswitha Gerlitz, was performed in the ROH Linbury Theatre. Other work includes: pieces Ona’s Flood (2013), The Year of Jubilee (2013), Cry Palestine (2013) and Music on the Mind (2015).

Susannah Waters began her career as an opera singer, performing principal roles in many international opera houses before turning to writing and directing. Recent directing: Imago, by Orlando Gough (Glyndebourne); Chabrier’s Lucky Star and Delius’s A Village Romeo and Juliet (New Sussex Opera); Harrison Birtwistle’s Down by the Greenwood Side (2014 Brighton Festival); Being Both (2015 Brighton Festival / RAH Proms). In 2015 her production of La Liberazione di Ruggiero (Brighton Early Music Festival), was one of five top productions of the year chosen by the Guardian.

Chris Wallis has worked in theatre production for 40 years. He is MD of Watershed Productions, a commercial theatre and radio production company that has toured nationally since 1996. The company’s work tours in the large, middle and small scale, as appropriate, in the UK and abroad. He also makes drama for BBC R4 and R3. Prior to starting watershed Chris worked in regional theatre and for the BBC

Chris Taylor is a publicist with Cambridge Theatre Co and The National Theatre prior to forming her own arts admin/publicity company and working with the Young Vic, Temba, Paines Plough, English National Ballet, RSC, Greenwich Theatre and many other producing companies. In 2001 she founded New Writing South, the regional literature / new writing company for the south east, successfully leading it for 15 years.

Hive Opera Productions is a new company formed by: Carole Hayman (Writer), Harvey Brough (composer), Chris Wallis (Producer) and Chris Taylor (Associate Producer). Our vision is that The Hive is a creatively ambitious, entertaining and intellectually provoking work that reaches new audiences, particularly audiences who do not usually attend opera. We are planning to tour The Hive in 2018/9. http://hiveopera.com/