Scene/Variation 3 Miss Havisham is visited by her avaricious relations, the Pockets

Scene/Variation 4 Pip is apprenticed to the Blacksmith

Scene/Variation 9 and Finale Pip discovers who his benefactor is. Miss Havisham expresses regret 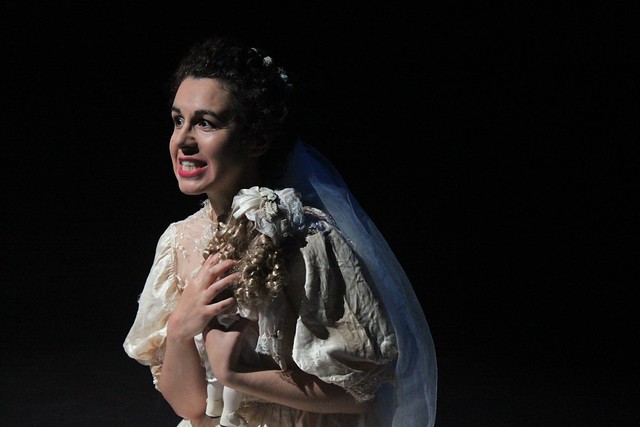 Jacques Cohen’s music (published by Norsk Musikforlag in Oslo) includes Yigdal (which has been commercially recorded, broadcast and performed many times now, both here and abroad) Passion Fragment and a massive, brand new symphony. He is Principal Conductor of the Isis Ensemble and has also recently conducted concerts with Sofia Soloists, National Symphony Orchestra of Ukraine, Albania Radio and Television Symphony Orchestra, BBC Concert Orchestra, and the George Enescu Philharmonic in Bucharest with whom he has been a regular conductor since 2003. He studied at Oxford and at the Royal College of Music where he was awarded, among other prizes, the Tagore Gold Medal, the RCM’s prize for its most outstanding student. www.jacquescohen.co.uk

Marie Vassiliou studied singing and viola at the Royal College of Music. As a concert soloist, she has appeared at all the leading London and at festivals including Huddersfield Contemporary Music and the BBC Proms. Operatic engagements in Austria, Germany, Italy, Japan, Mexico, Russia, USA & UK have included: La Calisto, Poppea, Donna Elvira, Léïla, Micaëla, Mimi, Nedda, Pamina, Tatyana, Violetta and Governess (Turn of the Screw), and roles in contemporary operas by Simon Holt, Richard Chew and Mike Westbrook. She has given world premieres of works written for her by Harvey Brough, Richard Chew, Anthony Gilbert, Kenneth Hesketh and Mike Westbrook. Most recently she appeared at the Royal Opera House, Linbury Studio, in the world premiere of Errollyn Wallen’s Yes. www.marievassiliou.com

The Piatti Quartet are winners of the St Martin in the Fields Chamber Music Competition, the Martin Musical/Philharmonia Scholarship Fund and are fast emerging as one of the UK’s leading young string quartets. Previous recipients of the Tunnell Trust Award and selected as Park Lane Group Young Artists in 2009/2010, more recent news includes a second year as Chamber Music Fellows at the Royal Academy of Music and winning the St Peter’s Eaton Aquare Prize 2011. In addition to their many appearances abroad, they have performed at the South Bank Centre and live on BBC Radio 3. www.piattiquartet.com

Emily Harwood is a freelance set & costume designer and theatre maker. Since graduating from the University of Kent, she has worked with a rich variety of companies ranging from Punchdrunk, Spare Tyre, the National Youth Theatre, the Albany and many more. Her skills include design for the stage, set construction, prop making, model making and sourcing. She is a highly resourceful designer, always aiming to be innovative and creative with her vision; making the ordinary extraordinary. Emily is also co -founder of Dandelion Clock Shop; an emerging storytelling company aimed at creating fun and heart-warming stories for children and those young at heart.

Christopher Emms has directed for The Theatre Breaks Festival and the Royal Court Young Writers Programme. In October he will direct Chasing Beckett by John Hill at the London Theatre.