This production is the latest incarnation of The Lost Chord by Tim Hopkins for Opera North: a series of pieces taking different paths through music by Sullivan, Balfe and others. The first The Lost Chord (May 2007) was a video installation and immersive performance at Belsay Hall, commissioned for the English Heritage project Picture House. The second (January 2010) took place in the Howard Assembly Room at Opera North Leeds alongside Opera North’s mainstage production of Ruddigore. Gaining a script, this event formed the mysterious model for tonight’s visit to Hammersmith.

Who is our mysterious absent friend?

What lies on the other side?

What has Bovril got to do with it?

After dinner on a slow summer’s night, the candlelight flickers and your host rises to his feet… An intimate audience of just 30 people will gather around a large dining table for an evening of mysteriously fragmented tales, Victorian obsessions and witty, heartbreaking songs by Sir Arthur Sullivan and others, performed by the strangest of your fellow dinner guests. 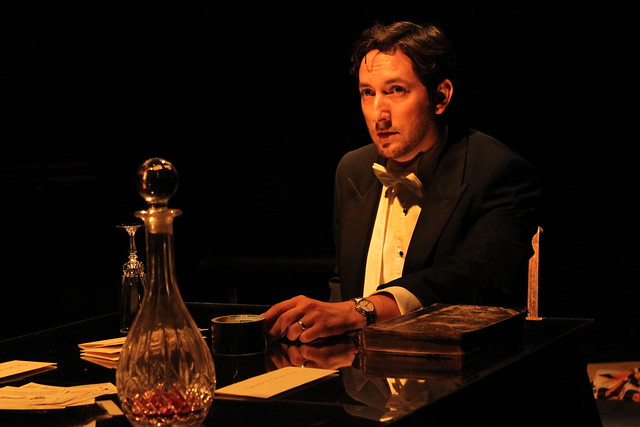 Geoffrey Dolton studied at the Royal Academy of Music, the National Opera Studio, and in Milan with a Peter Moores Foundation scholarship. He made his debut as Guglielmo in Cosi fan Tutte for Opera North. Since then he has sung principal roles for every major company in the UK. He has worked as a performer and director in Hong Kong, Adelaide and Auckland, as well as Venice and many other cities around Europe.

Matthew Sharp studied at the Koln Musikhochschule, Trinity College, Cambridge and in Stockholm. He combines core, ‘classical’ activities with a uniquely pioneering outlook within music and across disciplines. Matthew’s own work in opera and music theatre has been highly acclaimed and toured the UK, US and India. He has given solo performances at Glastonbury and Latitude and collaborated extensively with leading artists from jazz, world music, theatre, dance and film. He is the new Artistic Director of the Deal Festival for Music and the Arts.

Nicholas Sharratt studied in Koln and Cambridge. He has performed at major venues and festivals worldwide. For Opera North: Papageno and the title role in The Pied Piper. Solo performances with, the LPO (SBC), RPO (Barbican), at Glastonbury, the Wigmore Hall, recordings for Sony, Naxos and Avie. He has made pioneering collaborations within music and across disciplines and is the new Artistic Director of the Deal Festival.

When a Man Knows