A new opera, adapted from Chinese classic Zen Master Yu’s Dream in the Green Jade Land, an episode from Four Chatters of the Gibbon, written by Xu Wei (Ming Dynasty).

A new opera, adapted from the Ming Dynasty classic by Xu Wei.

A modern western opera incorporating elements of classical Chinese aesthetics, The Monk and the Lotus aims to transform the performance style of opera singers through innovative stage direction that takes inspiration from the close integration of singing and physical movement, a feature inherent in traditional Chinese Opera.

The story and original text:

Southern Song Dynasty, Lin’An, the capital of the empire: The monk Yutong (“Jade Vessel”) resides in the Shuiyue (“Water-Moon”) Monastery, where he has been practicing ascetic Buddhism for 20 years. When Yutong refuses to pay obeisance to the newly promoted magistrate Liu, Liu plots his revenge. Liu orders his courtesan Honglian (“Red Lotus”) to seduce Yutong, thereby ruining his religious achievements. Liu promises Honglian that upon her completion of this blasphemous mission, she will be granted her freedom. Honglian arrives at the monastery at night, feigning illness. Yutong, full of mercy and compassion, must face a test like none he has encountered before…

Zen Master Yu is a classic Chinese story known for its sarcastic comments on political bureaucracy and religious practice. This operatic adaptation, trimming most references to its specific socio-political context, aims to retain the philosophical essence, exploring the collision between spiritual pursuit and human desire, and asking questions about the nature of reality itself: flower in the mirror, moon in the water, what is real, what is illusory?

The Monk and The Lotus from Tête à Tête #2 on Vimeo. 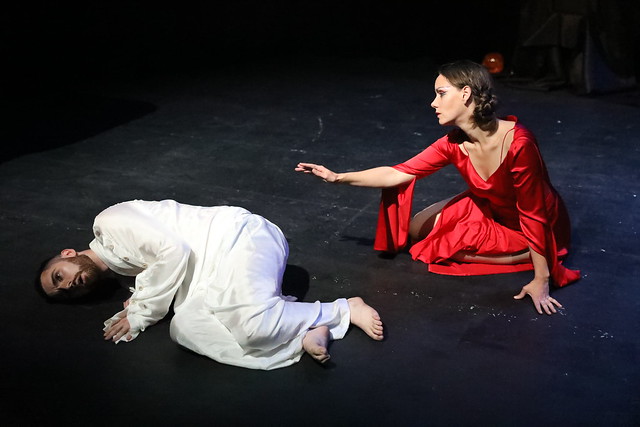 Shiru Wang, Opera and musical theatre director, voice and movement coach based in London and Shanghai. BA in music performance (Renmin University of China), MFA in theatre directing (East 15 Acting School). Worked as a professional tenor in Shanghai Opera House and China National Centre for the performing arts for 10 years.

Niccolo D. Athens (b. 1988) grew up in San Antonio, Texas. BM in composition from the Juilliard School, PhD at Cornell University, and a Fulbright scholar at the Central Conservatory of Music in Beijing studying composition. He has received two BMI Student Composer Awards and a Charles Ives Scholarship. He currently teaches at the FaceArt Institute of Music in Shanghai.

Zhao Tong Tong has trained at London College of Fashion in womenswear and Royal Central School of Speech and Drama in scenography. She is the artistic director of Hexagon Collective and has designed and produced fashion performances in Paris, Shanghai, and London. Her spatial works were finalists for the London Tower Bridge Public Art Project and Cambridge live Pink Floyd art installation project.

July Yang holds an MA in performance making at Goldsmiths, University of London and a BA in English literature and cross-cultural studies at the University of Hong Kong. She has trainings as soprano, flautist, in physical theatre and Kunqu Opera. She works as director, playwright, actor/performer, singer, puppeteer, stage manager, sound/light technician and videographer.

Yongqiu started playing the piano at the age of ten and attended the Middle School of Sichuan Conservatory of Music in China. She received her BMus at the Royal Northern College of Music and was awarded the RNCM Piano Duo Prize, and continued at Guildhall School of Music and Drama specializing in piano accompaniment.

April Fredrick studied at University of Northwestern St Paul and gained an MMus in Vocal Performance and a PhD on the late songs of Ivor Gurney at the Royal Academy of Music. Hailed as ‘astonishing and luminous’ (Bachtracks), her soprano performance of ‘Jane’ in John Joubert’s Jane Eyre with the ESO was described as ‘utterly riveting, with a terrific dramatic sense’ (Music and Vision) and ‘simply breathtaking’ (Musical Opinion).

Robert Haylett studied at Girton College, University of Cambridge; since then he has established himself as a singer and singing teacher in Peterborough.

He has portrayed many operatic roles, frequently appears as a concert soloist, and sings at Peterborough Cathedral as a lay clerk. Future plans include studying for the Postgraduate Certificate in Performance Teaching at the Guildhall School of Music and Drama.

Margherita Deri studied ballet, contemporary dance, house dance, tap dance at Arti’s Dance School in Genoa (Italy). She graduated from LSDA Foundation Course, and is currently a student of BA Acting and Contemporary theatre at East 15 Acting School. She has worked extensively as an actress and singer, both for theatre and for films.

Max Percy is a recent graduate from the BA Acting course at East 15. His previous opera experience includes Benjamin Britten’s A Mid-Summer Night’s Dream as well as the Hong Kong premier of the musical Spring Awakening. He has trained in circus, ballet and contemporary dance with a passion for physical theatre.

Duncan Hodgkinson is a French performer and writer from Mallorca. He is currently on the BA Acting (International) course at East 15 Acting School. He has recently portrayed the role of Don Armado in Shakespeare’s Love’s Labour’s Lost (East 15), as well as a co-written play called Central Story Line for Pub Theatre Festival in Camden’s Etcetera Theatre.

The Woman Who Refused To Dance