By developing current access methods, exploring new possibilities and working with a fresh approach to live music in a collaborative environment, we will transform what the opera experience can be, for deaf and hearing audiences.

The piece integrates BSL, Captioning, techniques linked to vibration and visual interpretation of sound, live audio manipulation and inclusive staging. We are testing these techniques today and your feedback is vital to the development of the piece. 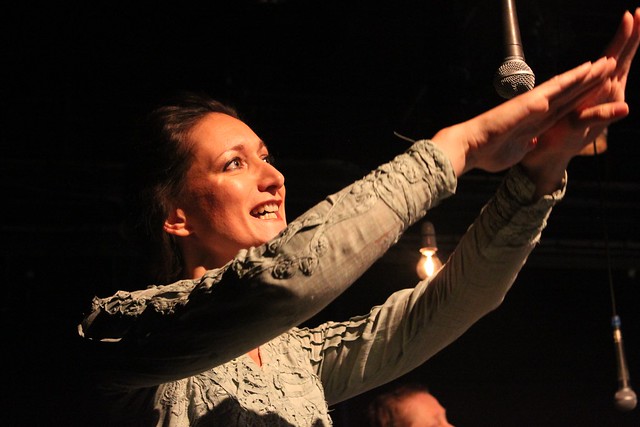 Born in Dover, Delaware in 1863, Annie learnt about the stars from her mother, a keen amateur astronomer. After attending one of the first ladies colleges in America, Annie gained her degree in 1884, specialising in Maths and Physics. She returned home, but found domestic life quite dull after her college experience.

Annie’s mother died suddenly in 1894, leaving Annie devastated. After several months battling with her grief, she came to the conclusion that her only choice was to find something to keep her busy. She went back to college, where she took up astronomy professionally, becoming part of Pickering’s ground-breaking team at Harvard, where she was to live and work until her death in 1941. Around the time of her mother’s death, Annie’s hearing began to deteriorate badly. Despite her hearing loss, and being one of the only woman in her field, Annie rose to the top of her profession. An expert in the new study of Spectroscopy, Annie was responsible for analysing and cataloguing over 300,000 stars, and authored the Draper Catalogue which is still in use today. She had incredible focus, a unique view of the Universe and a twinkle in her eye.

Sarah Grange is a multidisciplinary theatre practitioner, recently graduated from an MA in Advanced Theatre Practice at CSSD. She writes, designs, directs and devises live work.

Katherine Mount trained at Birmingham School of Speech and Drama. Most recently she has appeared in London’s revival of Maury 5 Yeston’s Nine, and in a new musical about Jack the Ripper, Ripper’s 5. She is also a member of the cabaret trio GoDiva. Katherine’s son is deaf.

Janine Roebuck was told at the age of eighteen that she was going deaf, and many people told her she would have to give up her dreams. Instead she went on to become successful in both opera and musical theatre. She managed to keep her disability a secret for over thirty years, before finally deciding to go public. The Champion Award was presented to Janine in 2009, and she was given a coveted place on The Independent ‘Happy List’ in 2010.

Mark Smith is a freelance choreographer. Born deaf, he trained in all forms of dance from the age of four, studying at the Royal Ballet School and Bridget Espinosa’s London Studio Centre. Mark is the founder and artistic director of all-male dance company Deaf Men Dancing. Recently, he collaborated with visual artist Rachel Gadsden to create ‘Alive!’ for outdoor festivals. He is currently choreographing the Paralympics Opening Ceremony.