Sketches for The Sandman were originally workshopped with ROH2 in 2010, with a section of the opera being exposed at the Royal Opera House Exposure evening in 2011, and it is now that we are seeing the finished product produced by Size Zero Opera and generously supported by the Stephen Oliver Award. The Sandman tells the story of a young girl called Olympia who is poisoned with weedkiller by a supposed childhood friend. Olympia soon finds herself falling into a coma which takes her, and us, into a world of animalistic sleep predators, kinky medical staff, medieval cows and bin bag mermaids. Olympia is stalked by the infamous Sandman until she…

Size Zero Opera was founded by composer and mezzo-soprano, Laura Bowler in 2007. The company specialise in the creation and performance of contemporary and innovative chamber opera with emerging individuals in exciting and challenging ways. We bring our musicians to the forefront as they are integral to the theatre we want to create and explore. This is Size Zero’s fourth year at the Tete a Tete Opera Festival, where we have now premiered 6 chamber operas in total. Future projects include a tour to Singapore where Size Zero will be giving the Singaporean Premiere of The Boy Who Lived Down The Lane by Diana Soh; a new commission for Summer 2013, ‘The Viagron’ by composer Arne Gieshoff and librettist, Frank Allison, as well as a new music theatre work by the American, UK based composer, Darren Bloom. 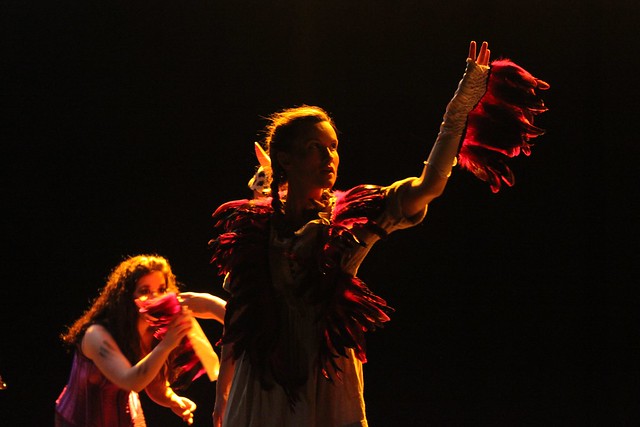 Laura J Bowler is a composer, mezzo-soprano and opera director living and working in London and Canada. She is the Founder and Artistic Director of Size Zero Opera as well as the Artistic Director of the new music ensemble and chamber series, Land’s End Ensemble, in Calgary, Canada. She has been commissioned by and received performances by the London Philharmonic Orchestra, BBC Symphony Orchestra, The Opera Group, Tête à Tête: The Opera Festival, Grimeborn Opera Festival, the Kreutzer Quartet, Ensemble Linea (France), Lafayette Quartet (Canada), Southbank Sinfonia, Neue Vocalisten Soloists (France), Azalea Ensemble among others. Future projects include commissions from the Ligeti Quartet, Lands End Ensemble (Canada), Huw Wiggin (Saxophonist) and workshops on a new chamber opera with singers from the Danish National Opera and ensemble Lydenskab in Denmark this coming September. She is also assisting Director, Frederic Wake-Walker, on Glydebourne Opera’s new production and tour of The Yellow Sofa.

Sophie recently completed a Masters in Russian Studies at Cambridge, and studied cello for a year at the St Petersburg Conservatoire. In April she staged Gluck’s “Orpheus and Eurydice” in Clare College Chapel, Cambridge, and is currently directing The Sandman (2012) by Laura Bowler for Tête à Tête: The Opera Festival. She has worked as Assistant Director and Russian interpreter in France (Opera Comique) and at the ROH.