Catch-up for £1 until 5th September

It is 1837 and Mary has been arrested for a breach of the peace. She is an outspoken woman and the authorities of Doncaster are confounded. They sentence Mary to a lifetime confinement in Wakefield Asylum.

The Unravelling Fantasia of Miss H. is a poetic portrayal of a Victorian woman imprisoned by a society intent on control.

Mary Frances Heaton’s tale is told through her own words and her defiant protests stitched into embroidered samplers, discovered in the asylum years later.

Mary’s struggle to hold on to her identity and reach the outside world speaks across the years, her outrage at a corrupt system urging us to ask ‘How much have things have really changed?’

This contemporary opera is a new composition by soprano Red Gray and Sarah Nicolls with her inside-out piano.

The Pre show music as the audience take their seats will feature the works of composer and performer Kate Loder a contemporary of Mary Frances Heaton though born a little later in 1825 who at the age of 19 became the first female Professor of Harmony at the Royal Acadamy. Once married it was insisted upon by her husband that she give up her career as a public performer although she did continue to teach and compose. We wanted to give her back the chance to have a 21st century London audience. Enjoy.

The interactive broadcast will include a presentation about the community engagement connected with the show: Radical Embroidery Workshops with Women’s Community groups. 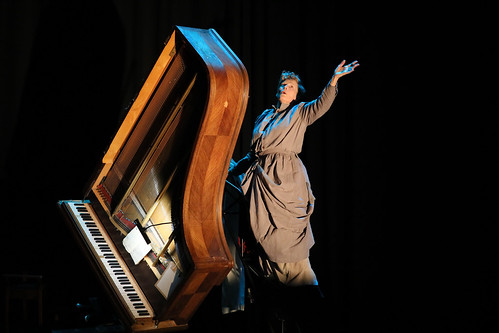 To see more of Mary’s samplers on our website (courtesy of MHMuseum, Wakefield) visit https://www.stitched-up-theatre.com/mary-heaton