Inspired by the life, death and work of Beat writer Richard Brautigan, two-­‐time Emmy-­‐nominated American writer Erik Patterson wrote a play: TONSEISHA. Since 2011, London-­‐based theatre company saltpeter has drawn together exciting, international artists and technicians from disparate disciplines to use this text as fertile ground for developing not only a new version of the tale, but a new way of creating theatre.

Director Gary Merry and composer Kim B Ashton havecultivated an operatic landscape out of the play. Today’s performance presents two new compositions and additional performers, as part of the creative investigation. This year also marks the 30th anniversary of Richard Brautigan’s death.

TONSEISHA is an exploration of grief across time and cultures.

A young Japanese woman is haunted by the loss of two men: her father – whom she barely knew – and cult novelist Richard Brautigan – whom she’s never met.

TONSEISHA is a play written mostly in haiku verse. 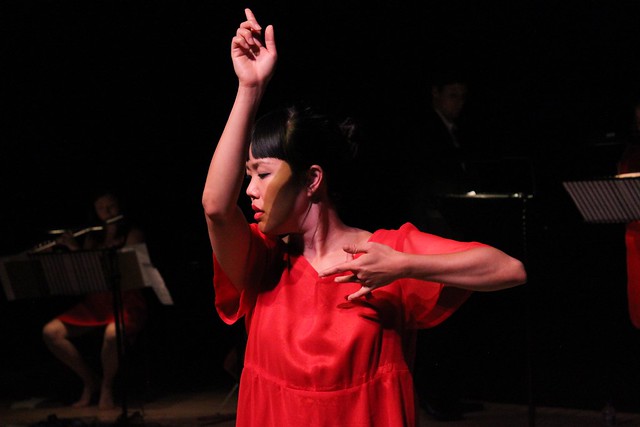 In Kim B Ashton’s music, zen calm meets zen violence while the sounds of nature mix with the sweet strains of hardcore modernism. Kim lectures at Cambridge University and King’s College London, where he received his PhD earlier this year. Recent work includes pieces for the OAE, the LSO, and Ensemble InterContemporain.

Gary Merry is director of The New Factory of the Eccentric Actor, and Associate Director with saltpeter. Theatre includes: The Last Days of Limehouse (Yellow Earth), 1848 and Jubilee (Bohemia), To Moscow To Moscow, Victory Over the Sun, New Babylon 1871 and The Fever (saltpeter), The Gilded Vectors (The Mustard Club) and The Proposal (Latitude).

Satoshi Date is a Tokyo-­‐born artist, a Central Saint Martin’s graduate and creative director of his eponymous art and design label. Satoshi blends art, music and clothing into his creations with a social and environmental theme and shows designs at London Fashion Week and internationally. Satoshi lectures at Kyoto Art, Nara Women’s and Toho Music Universities and was part of Japanese Top 10 bandIkimonogakari.

Philippa Boyle was a choral scholar at Clare College Cambridge. She trained at Conservatorio Santa Cecilia with Elvira Spica de Masi and Sara Mingardo, where she gained an MA in Opera with full marks and distinction. She continued her studies at Opera Studio Santa Cecilia with Renata Scotto. In 2013, Philippa won the Emmy Destinn Young Singer Award and was a semi-­‐finalist in the Kathleen Ferrier Awards.

Ilze Ikse is a London-­‐based Latvian flautist. On scholarship at the Royal Academy of Music, she graduated with the Academy’s highest award in recognition of her outstanding Final Recital. She has a special interest in contemporary music and works with Manson Ensemble, Ealdwick Ensemble, Matisa Hancke, Robert Szymanek and Antonia Barnett-­‐McIntosh.

Sean Patterson trained at RADA and has appeared in the movie Night Of The Fox, on TV in The Bill, Love Hurts, Hale And Pace and London’s Burning. Sean has played Bobby Kennedy at The White Bear Theatre and has appeared at The Theatre Royal Haymarket, Aldwych Theatre, Apollo Theatre, Kings Head, Old Red Lion and Riverside Studios.

Sophie Rivlin is a freelance cellist who has performed chamber music at venues including the Wigmore Hall, St Johns Smith Square and the Purcell Room. She is currently a member of Troupe (www.troupecollective.co.uk) and the Metier Ensemble (www.metierensemble.co.uk), and has performed with orchestras including the Royal Philharmonic Orchestra and Northern Sinfonia.

Chris Webb read Classics at Girton College, Cambridge, where he held a choral scholarship. He then sang with – and managed – the Choir of Clare College. Chris learns with Marcus van den Akker, and has participated in masterclasses with James Gilchrist and Matthew Rose.