WHISPER DOWN THE LANE is a playful opera happening that should leave you with a smile on your face while also making you think a little. We try to push the boundaries of what opera can be, in sound and in form, and perform in unconventional spaces to an audience of passersby or, as in this instance, to festival-­‐goers who expect to have a quiet pre-­‐concert drink.

After the success of Twitching (performed at Tête-­‐à-­‐Tête: The Opera Festival 2012), I had it in the back of my mind to create a new happening to premiere at Tête-­‐à-­‐Tête: The Opera Festival 2014. The idea for the piece came while researching old Gramophone tubes and other speaking devices for another composition earlier in the year. I thought it only natural to write a performance piece involving all these tubes and pipes that were sitting idle on my piano and which were going to be thrown away. And so it began…

Do you believe everything you read? Can you verify the source of the information and how it was passed on? Can you follow the trail? Is it a spin? Is it rumour? Is it actually true?

Even the most trivial snippet of news, however manipulated or bona fideit may be, is promoted to a worthier level as soon as it is written down in black and white. Unlike the elusive spoken word, evaporating instantly and leaving behind only the memory of its sound and meaning, the printed word weighs heavier, lives longer and comes to be literature! It becomes the truth. But can you trust it? 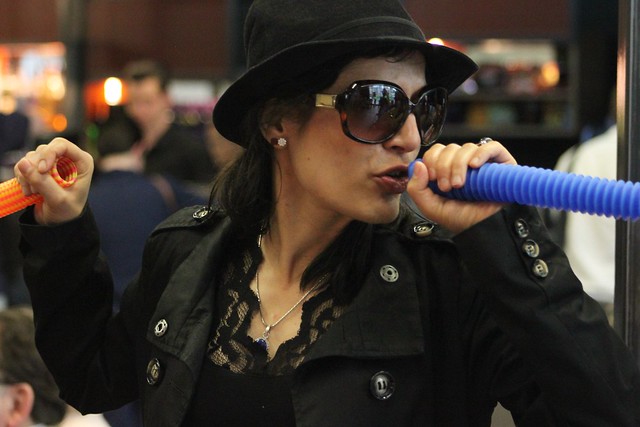 Catherine Kontz (b. 1976) is a Luxembourgish composer, currently based in London. She studied Composition at Goldsmiths, University of London, under Roger Redgate and, as part of her PhD, produced and directed her mime-­‐opera, MiE for a set of six sold-­‐out performances in 2006. She has since worked extensively within the world of contemporary opera, as well as writing for performers such as Ensemble LUCILIN, Monica Germino, Cathy Krier, Rhodri Davies, Tomoko Kiba, Vincent Lièvre-­‐Picard, Sebastian Lexer and BJ Cole. Catherine has been commissioned by Huddersfield Contemporary Music Festival, Rainy Days Festival (Philharmonie Luxembourg), European Concert Hall Organisation (ECHO), Shorter House Editions, EUTERPE/Cid-­‐Femmes, Rational Rec, Chetham’s School of Music and Noisewatchers Unlimited, amongst others. She was delighted to have been given the opportunity by Les Théâtres de la Ville de Luxembourg to compose and direct her first full-­‐length opera, Neige in December 2013, to great acclaim. This will be the sixth time Catherine has written a new work for Tête à Tête: The Opera Festival – where she usually collaborates with fellow DrawnForth Opera co-­‐founder, Ellan Parry. Catherine likes bright colours, bold clashes and a bit of dissonance, and looks to catch a few beautiful moments on her way. www.catherinekontz.com

Ellan Parry is a designer and devisor of theatre and opera. She trained at Motley and Wimbledon School of Art, and is a previous Linbury Prize finalist and winner of the Jocelyn Herbert Award. She has collaborated regularly with Catherine since 2006, on works including: MiE, Salmon Stories, Ingrained Deeds, critically acclaimed new opera Neige (Grand Théâtre de la Ville de Luxembourg), and Purblind (Hammersmith) – with which she and Catherine opened the very first Tête à Tête: The Opera Festival in 2007. Other recent opera includes: The Secret Marriage (British Youth Opera), Noye’s Fludde (Southbank Centre) and El Niño (Spoleto Festival, USA). www.ellanparry.co.uk