YOUR CALL… grew out of my work with the CreST (Creative Speech Technology) research project at the University of York. CreST was a collection of people from industry, science and the arts, all with an interest in the voice. We have shown concert and semi-­‐staged workshop performances of YOUR CALL… at the Woodend Gallery, Scarborough (as a part of Articulate, the first ever concert of music for human and synthetic voices), the National Centre for Early Music, York (as a part of the York Festival of Ideas), Harvestworks Digital Media Arts, NY and the University of North Texas, Denton. Part 1 of YOUR CALL… was presented as a part of the Tête à Tête: The Opera Festival 2014.

YOUR CALL… is a music-­‐theatre work that explores the intersection of humans and technology. Using synthetic voice technology, this piece pits one woman, played by two mezzo-­‐sopranos, against a gaggle of synthetic voices on her phone. Lost in a comically surreal digital world where truth and meaning are always in flux, she struggles to understand and be understood.

Her phone rings. She answers. Another annoying automated call, a synthetic voice jabbering away. But the voice seems to know more than it should. Then there are more and more voices, and she finds herself plunged into a horde of synthetic characters with an agenda all their own; if only she can figure out what that is. YOUR CALL… uses technology to explore the rocky terrain of our relationship to that technology and the ways in which it is an ever more intimate, sometimes intrusive presence in our lives. 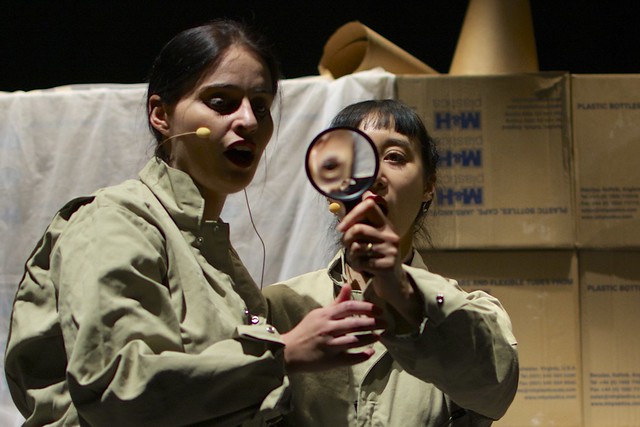 Kevin Jones has written and directed numerous music/performance works, which have been presented throughout the U.S., Europe, Australia and Canada, and broadcast internationally. His fiction has been published in the Minetta Review and the Portable Lower East Side, and his text/sound works were included in the anthology Texts/Sound Texts.

Joy Kellman’s choreography has been presented across Europe and the U.S., and at venues such as The Joyce Theater, Central Park’s SummerStage, 92ndStreet Y, Harkness Dance, Dance Theater Workshop and WAX.She’s received grants/commissions from Harkness Foundation, The Yard, DTW and Massachusetts Arts and Humanities Foundation, among others.

Lisa J Coates (mezzo-­‐soprano) recently performed roles with Co-­‐Opera, #Opera CO and Associated studios, and was a soloist for Duruflé’s Requiem, Bach’s B Minor Mass and Handel’s Messiah. She’s recorded for Boreas and Touch, and featured on BBC Radio 3. As Artist-­‐in-­‐Residence for Timeline Songs, she recently recorded an album of renaissance Christmas works.