Impropera dips into its collective experience drawn from London’s West End, the Edinburgh Fringe and travels across Europe to surprise and delight audiences with their fast-paced highly skilled improvised opera show, sharing their musicianship, agile wit and ingenious storytelling.

Once again, Impropera, the only and probably the best improvising opera company in the world, brings its uniquely audience-friendly approach to high art to the Cubitt Square stage. We work exclusively from audience suggestions – so if you don’t come and make some, nothing will happen….. On the other hand, when you’re there and suggesting stuff, anything at all might….

Opera makes the little things in life, as much as the life-changing ones, extremely important, so any small thing that passes through your mind could be just what we need to jump-start a searing tale of passion, betrayal and good clean family fun. You might wonder, for instance, how Lewis Cubitt was inspired to design Kings Cross station. Or you might wonder anything at all.

This show is a premiere, and it will never be done again. So thanks for having come along for a unique experience! 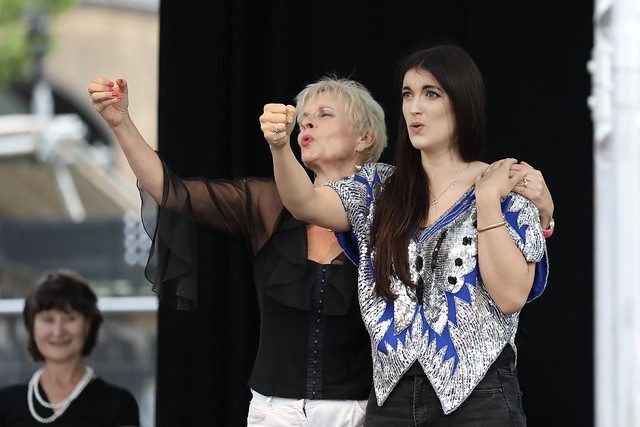 Susan Bisatt combines a career as soprano soloist with one as workshop leader and teacher. She is a tutor in the Education Faculty of Manchester Metropolitan University and leads workshops across the UK and at festivals worldwide, specialising both in teacher development and in the therapeutic effects of singing. Susan is a founder member of Impropera and is closely involved with a programme of developing youth cultural leaders in Europe and beyond: The Complete Freedom of Truth www.tcft.co.uk

Louise Crane is one of the UK’s most sought-after and versatile mezzo-sopranos, appears regularly in repertoire as diverse as Mistress Quickly (Falstaff) and Iolanthe (Iolanthe), and in concert works ranging from Rossini’s Stabat Mater to Janacek’s Glagolithic Mass. She also teaches singing at Birmingham Conservatoire, and is a regular and honoured guest with Impropera.

Fiona Finsbury is currently studying singing at the Royal Northern College of Music. Before this she spent two years in the West End cast of The Phantom of the Opera. Opera roles include Metella in La Vie Parisienne and Second Witch in Dido and Aeneas. She is currently a Buxton Opera Festival young artist and in December will be singing the title role in Cendrillon at the RNCM opera theatre.

Nick Allen studied at the Guildhall School of Music & Drama, and has a diverse career as a soloist in opera and oratorio, as well as primetime TV guest appearances singing on “The Matt Lucas Show”(BBC1), and Harry Hill’s “TV Burp”.  He recently made his debut as Frederic (Pirates Of Penzance), and Nanki-Poo (The Mikado) with the official Gilbert & Sullivan Opera Company on their UK tour. In 2015, Nick made his debut with the National Symphony Orchestra, as their tenor soloist for their annual “Flying Proms” event.

Niall Ashdown is one of the UK’s finest comic improvisers (The Comedy Store Players, Paul Merton’s Impro Chums, The Suggestibles), an associate artist with Improbable, and is currently in Kneehigh Theatre’s Tristan & Yseult. He has no formal training in opera, but you’d only know that if you shut your eyes.

Anthony Ingle is the founding musical director of Impropera and has been making stuff up in public for more than half a lifetime. Since studying music at Cambridge he has been involved in many shows of all kinds marrying theatre and music, notably Tête à Tête’s benchmark production of Salad Days, but extending from Nigel Osborne’s Differences in Demolitions to Pete Townshend’s Tommy.

With thanks to: Bill Bankes-Jones and Anna Gregg of Tête à Tête for inviting us and also to our Artistic Director, David Pearl for steering our small but perfectly formed ship through the choppy seas of these times.