HER BODY: The Anatomy of a Woman

A woman emerges from a pile of rubbish like Erda in Wagner’s Ring. Extended vocalisations interface with sea sounds and film. International composer/singer Susannah Self performs as SEAWOLF to combine physical theatre with punchy minimalist music. “I know that my body excites women, body excites men”. The Anatomy of a Woman, once the focus of male artists, is re-conceived to allow us to become authentically embodied. Inspired by artists Yayoi Kusama, Billie Eilish and Pina Bausch, HER BODY is the antidote to traditional operatic interpretations of what it feels like to be a woman.

The interactive broadcast will include a panel discussion about how the experience of being embodied can manifest through music, abstract sound, extended voice, story telling, physical theatre and operatic installation. With the creator Seawolf/Dr Self, the writer, Dr Alison Habens, the singer/creator, Loré Lixenberg , chaired by Artistic Director of Tête à Tête, Bill Bankes-Jones.

You can find a programme article for HER BODY here. 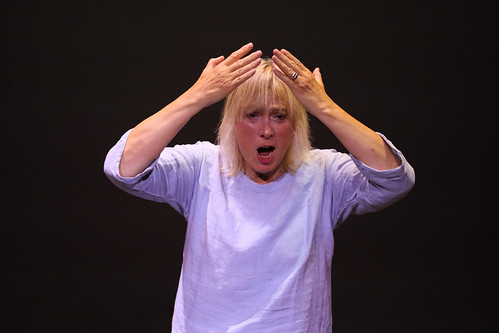 You can read a blog about SEAWOLF’s process here.

Dr Susannah Self/Seawolf has an extensive career as a composer of contemporary music, installations and opera. Her methodology of composition embraces eclecticism via her evolving practice of quilting technique which embraces diversity. She trained in composition, conducting and singing at The Royal College of Music (ARCM singing) and Cambridge University (MPhil composition). She won scholarships from The Royal Society of Arts to study Strauss roles in Germany and The Banff Centre in Canada to study music theatre with John Cage. In 2020 Susannah completed her PhD in composition at The Royal Birmingham Conservatoire funded by a stipend from a STEAM scholarship. Susannah is also a freelance opera singer. She has sung many solos roles for De Vlaamse Opera, Opéra du Rhin, Lyon Opera, The Landestheater, Salzburg, Luxembourg Opera and in London’s West End. She began her singing career in the choruses of The Royal Opera House and Glyndebourne and returned to these houses later to cover many roles. Commissions in 2020: FAST for Spitalfields Festival, The Frontline Worker for Skipton Camerata, ORANGE for English Touring Opera and Quiltscape III for Maria Marchant, The tour of her new opera Artemisia was cancelled last year due to Covid. Commissions in 2021: Her Body: The Anatomy of a Woman for Tête a Tête, Pharoah for Princeton University, Tristan Sings for Andy Ingamels and SYNAPSEfor clarinet and electronics for New Wind Festival. In the last three Years The Birmingham Opera Company commissioned Freedom Bridge, three chamber works for The Birmingham Contemporary Music Group and Birmingham Royal Ballet. Susannah conducted the première of her operas The Butt at Musiktheatertage in Vienna in 2016 and Quilt Song at The Old Birmingham Rep in October 2018.  Dr Self has just won composing residency at Aldeburgh next spring her Publisher is composersedition.com. She directs her own company Selfmade Music and teaches composition at Junior Guildhall School of Music and Drama in London.