Evangelia and Bill Herbert have a long-term collaboration and were the creators of Bumblepuppy (commissioned by last year’s Tête-à-Tête Festival), the world’s first opera in a Zorb ball! Darren and Evangelia have previously worked together on the critically-acclaimed Tempt My Better Angel. Little Instruments of Apprehension, is a labour of love, prepared within a week during which we were also involved in other activities. It is a work in progress which we hope to evolve into a bigger piece for a larger ensemble.

Little Instruments of Apprehension is a song and dance for doctor and patient, for pop star and public, for the infectious and

the susceptible, the living and the dead. Rich or poor, victim or bully, optimist or obsessive, we all want to be in control, to resist the reality of our mortality and our environment. Everything we know and fear is taken in by the five senses and their organs (eye, ear, nose, mouth, skin). These small apertures are protected, groomed and invaded by a series of little instruments. Exploring what we mean by sickness and health, crossing the border between mind and body, challenging the sovereignty of the individual, the cast will use objects ranging from domestic items to medical equipment to examine our daily libations and disinfections. The protective becomes percussive in a very contemporary dance of death. 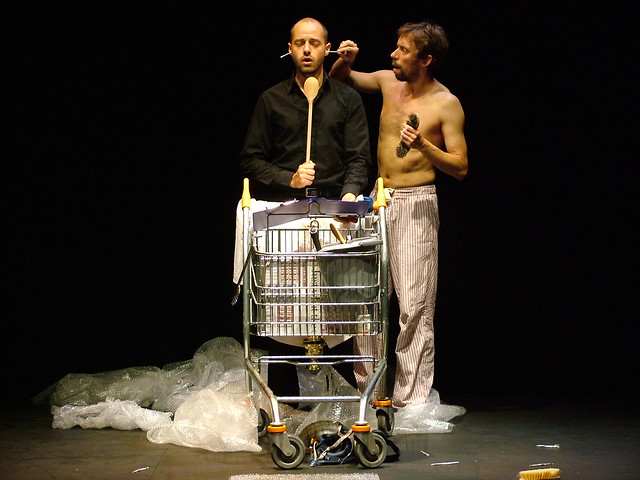 Evangelia Rigaki has a PhD in Composition from University of London, following which she undertook postdoctoral research at Humboldt University in Berlin. Her works have been performed in venues such as the Cheltenham Festival, Queen Elizabeth Hall, Aldeburgh, Darmstadt New Music Summer Course and the Operadagen Rotterdam Festival. Recent performers of her works include the BBC Singers, EXAUDI, Barbirolli Quartet, Chroma Ensemble, Richard Alston Dance Company, Opera of Thessaloniki, Opera Studio Minailo and Tête-à-Tête Opera.

W.N. Herbert was born in Dundee in 1961. He has published seven prize-winning volumes of poetry, most recently Bad Shaman Blues (Bloodaxe, 2006), and is widely anthologised. He has engaged in numerous public art and cross-media projects, and has collaborated with several composers, including Naomi Pinnock and the late Keith Morris. He is Professor of Poetry and Creative Writing at Newcastle University.

Darren Ellis trained at Rambert Dance School(1987-90) and the Laban Centre as part of Transitions Dance Company(1990- 91).He has danced with a number of Dance companies, Mathew Bourne’s Swan Lake (original cast), Cinderella, Nutcracker and Play Without Words, Random Dance Co. Mark Bruce Dance Co. and most recently Richard Alston Dance Co. as Rehearsal Director (2005-2007) and as a dancer (2007-2008) Darren has Choreographed two pieces for his own company Romeo Error and Good to go and for Richard Alston Company Tempt My better Angel and No more Ghosts. In 2008 Darren was invited to be part of the research project choreoroam, at the place, out of which came sticks and bones, a solo to be shown in spring loaded 2009. In February 2009 Darren performed in the play Unbroken at the Gate theatre in Notting Hill.