Surf Tailz was the first of Welsh National Opera‟s Street Songs projects, a wider three-year programme of work in the South Wales Valleys supported by the Paul Hamlyn Foundation. Surf Tailz explored the connection between music and sport. WNO took a team of professionals down to the seaside town of Porthcawl to teach young people from across the South Wales Valleys skills in surfing,

Synopsis
Welsh National Opera has been exploring ways to engage hard to reach groups, such as young men with singing, song writing and opera. Surf Tailz offered an opportunity for non-musical or performance groups to discover and develop skills in both sports and the arts, giving voice to their stories, celebrating their achievements and introducing them to opera. Filmed over five days along the South Wales coastline, the Surf Tailz film captures the stories, songs and surfing experiences of 32 young people from Bridgend, Maesteg, Ogmore Vale, Caerphilly, Pontyclun and Torfaen. The resulting film and original soundtrack (which will be played live at this screening) tell their stories. Each part is a collaborative effort led by the young people, supported by WNO. Filmed on location at Porthcawl and Southerndown, Surf Tailz premiered as part of Bridgend County Council‟s „Surf Cult‟ festival, 16 September 2008 and was performed with a live soundtrack. 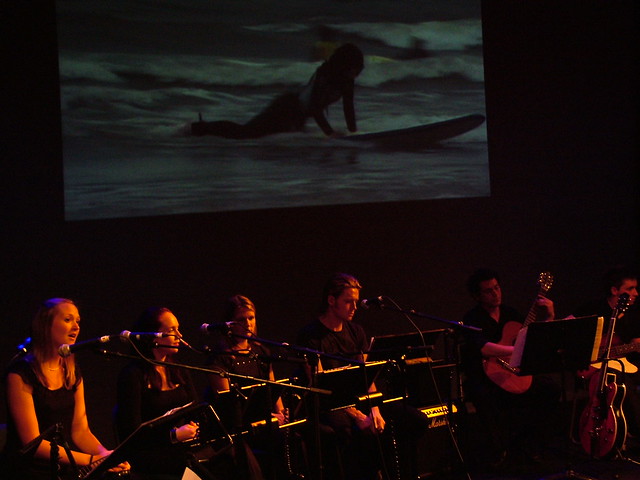 ALAN HARRIS – WRITER Alan is a Cardiff based playwright, working with Welsh National Opera, Hijinx Theatre, Sherman Theatre and others. He has written a new play for Radio 3’s The Wire. Other work includes Brute, which was staged at the Tristan Bates Theatre, London, by the Operating Theatre Company and projects with the National Youth Theatre of Great Britain and Paines Plough.

PAUL JONES – COMPOSER Paul Jones is a Composer, Improviser and Pianist. An associate composer with the Cardiff New Music Collective, he writes and performs with the Jones O‟Connor Group and runs the improvised noise trio Sound Engineer. He was Composer in Residence at Brecon Jazz Festival in 2006, and has received commissions from the Wales Jazz Composers Orchestra and P.R.S Foundation amongst others.

JENNY ROGERS – SOPRANO A graduate of the Welsh College of Music and Drama, Jenny works as a freelance singer, teacher and animateur. Previously a member of WNO‟s Youth Opera and now part of the Extra Chorus, she also frequently appears as a soloist alongside the BBC National Chorus of Wales, recording for BBC Radio Wales and Radio 3.

DAVID THAXTON – BARITONE Born in Wales David studied at the Royal Welsh College of Music and Drama where he became a member of Welsh National Youth Opera and created the role of the Wolf in John Doyle‟s world premiere production of The Tailor‟s Daughter. He was a Young Welsh Musical Theatre Singer of the Year and was a runner up in the Kathleen Ferrier Young Singers Bursary. David is currently performing the role of Enjoralas in the West End production of Les Misérables.

INGEMAR CRESSEY – SURF COACH Based in Porthcawl, but born in South Africa, Ingemar is a British Surfing Association Level 2 Surf Coach, qualified lifeguard and Fitness Instructor with over 20 years experience of surfing. Previously South African Surfing Champion for Under 12‟s and sponsored by Billabong, Ingemar has surfed and competed across the world from South Africa to America, Brazil and the UK.

ANNE GALLAGHER – DIRECTOR / EDITOR Anne graduated in Geography/Film & TV Studies from Aberystwyth University, and now runs her own company, “Tusker Films” specialising in filming the great outdoors. Many of her films follow environmental issues and climate change, as well as her love of surfing. Her most recent film On The Push combines both these areas, and has been screened across the UK.

As I Have Now Memoyre