In the quiet and peace of a lakeside town in Switzerland, the famed psychiatrist Mathilde von Zahnd runs the Les Cerisiers home for the mentally ill. The Doktor has fondly nick-named three of her patients ‘The Physicists’. All physicists by trade, each of these three has his particular delusions: the first believes he is Sir Isaac Newton, the second believes himself to be Albert Einstein and the third believes he is frequently visited by the biblical King Solomon, dressed in rags and speaking through a megaphone. We join the story with the arrival of Detective Inspector Voss. The Inspector is here to investigate the murder of Irene Straub, one of the young nurses, and the main suspect is the patient ‘Einstein’. This is the second murder by one of the ‘Physicists’, the first having been committed by ‘Newton’ the previous month. The Inspector attempts to investigate but is increasingly bewildered by the curious goings-on at Les Cerisiers. This is the first instalment of a two-part drama based on the Friedrich Dürrenmatt play of the same name. To be continued…

Timothy Burke and Nina Brazier, alongside design team Polly Webb-Wilson and Giulia Scrimieri have produced three sell-out successes for the Grimeborn Opera Festival including Spilt Milk & Trouble in Tahiti – Time Out Critics’ Choice, and The Old Maid and the Thief ‘Glorious Grime in Grimeborn’ Evening Standard. 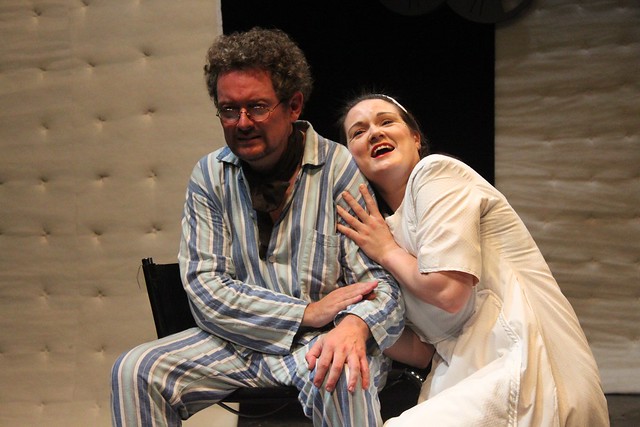 Martin Lamb read English at St John’s, Oxford, before studying at Guildhall. He debuted at the Savoy Theatre as Sergeant Meryll in The Yeomen of the Guard (D’Oyly Carte Opera Company). Recent performance highlights include Antonio, Le Nozze di Figaro and title role in The Money Man (Five: 15 2010), both Scottish Opera. Future engagements include: Dr Grenvil, La Traviata for the ENO.

Phil Minns Credits include: Peter and Paul in the double bill Hope In Boxes and A Light In Every Window North West tour (Elysion Productions), Stampfer in Future Shock (Killing Time Productions) for 24:7 Theatre Festival and

Re:Play Festivals in Manchester. He has climbed Kilimanjaro, walked the Bedouin trails of Jordan and has recently been honoured as an Olympic Torch bearer.

Miriam Sharrad debuted with the Australian Opera Studio in 2004. Recent credits include Marcellina in Figaro, Mrs Fox in The Fantastic Mr Fox (both ETO), Filippyevna in Onegin and Woodpecker/Frog in The Cunning Little Vixen (both Grange Park Opera), Dinah in Trouble in Tahiti (Renard Productions), Fenena in Nabucco (Opera South East). Future engagements include: Schwertleite (Die Walküre) with the Philharmonia Orchestra.

Scott Westoby studied Drama & Theatre Studies and Physics at Wath Comprehensive and has performed in several plays with the school and local theatre groups. At 13 he joined the National Youth Theatre. Credits include: Supernumery in LeanerFasterStronger (Sheffield Crucible Studio) and Cast Audience Member in Lives in Art (Sheffield Crucible). This is his first performance in London.