Re:Sound explore innovative approaches to the performance of new and existing works of music theatre. Our recent work includes After Party, a new play with music about the life of Schubert, and a stage adaptation of Judith Weir’s Missa del Cid in the production Battles Within and Without. Since our first production of Into the Woods in 2010, we have loved working with multi-­‐skilled performers who can not only sing and act to an exceptional level but also play a musical instrument. The music theatre these artists are able tocreate is tremendously exciting. There is no orchestra tucked away in a corner or a pit; the performers themselves create everything onstage. The Midnight Stories is our opportunity to explore this model, beginning with THOUSAND FURS and continuing with Fearnot and Mr Fox in 2016/17, providing the opportunity to work with three composer-­‐librettist partnerships and to develop the ensemble’s skills as singer-­‐instrumentalists.

THOUSAND FURS is the first part of The Midnight Stories – a trio of new operas based on early European folk tales, within which midnight plays a pivotal role. This story takes us back to a time before pumpkins and fairy godmothers, when the Cinderella narrative we know so well was only just beginning to take shape. After the Queen of a far-­‐off kingdom dies, a chain of events is set in motion that will lead to her daughter, the young princess Maria, finding herself forced to marry her own father. Fleeing her home in disguise, Maria becomes a servant in the kitchens of another kingdom, where a chance encounter with an arrogant prince offers her the opportunity to change her destiny… Told by six singer-­‐instrumentalists, THOUSAND FURS reveals the dark heart of a much-­‐loved tale. 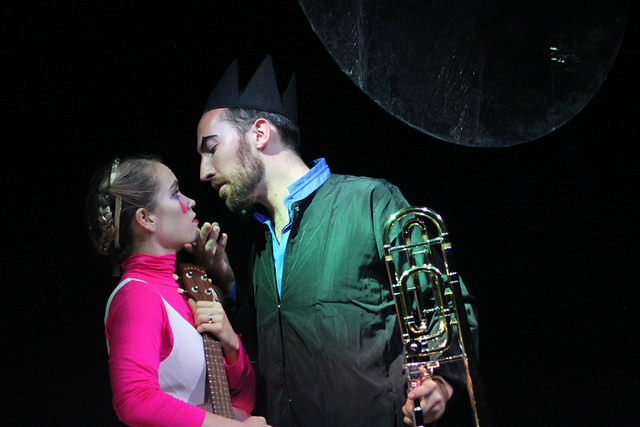 Jonathan Ainscough studied at Manchester University and the Royal Northern College of Music. Recent work includes the role of Schubert in After Party (Re:Sound/Oxford Lieder Festival), directing Trouble in Tahiti for the RNCM and The Witch in the Woods for Welsh National Opera, and leading weekly workshops for Streetwise Opera.

Rebecca Anderson is a singer and artist from Scotland, graduating from the University of Manchester (BMus) with 1st class Hons, winning both the Hargreaves and the Proctor-­‐Gregg Prize. She subsequently studied both Cello and Voice at the RNCM, and has worked with Re:Sound, Sawn-­‐Off Opera and the BBC, amongst others.

Katharine Armitage is a writer in both drama and comedy. Her work includes Five Children and It, Punch & Judy and After Party – a play about composer Franz Schubert. Katharine’s parallel universe comedy group zazU are currently performing at the Edinburgh Fringe (@wearezazu). THOUSAND FURS is her first opera libretto.

Michael Betteridge is a composer with an eclectic output and an interest in working within any unusual parameters including site-­‐specific work. His music has been performed by performers/ensembles/festivals such

as Nicola Benedetti, the LSO and the Salisbury Arts Festival. He is Sound and Music Embedded Composer-­‐in-­‐ Residence with Hampshire Music Service and co-­‐director of Collectives and Curiosities.

Rebecca Lea is Co-­‐Artistic Director of Re:Sound. She has sung as a soloist in many international venues, including Wigmore Hall, Kings Place, the Purcell Room, The Sage, Gateshead and Laiszhalle, Hamburg. She also sings with choirs including the BBC Singers, The Sixteen, Choir of the Enlightenment and BrittenSinfonia Voices.

Roderick Morris trained with Royal Academy Opera and has worked for companies including ENO and Iford. Credits include: Guido Flavio, Giasone Il Giasone, Scorceress Dido and Aeneas and Arsace Partenope. He sings much oratorio, performs Baroque recitals with various orchestras, and has appeared as a soloist on BBC Radio 3.

William Petter studied at the Royal Academy of Music, graduating with their highest award, distinction with DipRAM. He directs the choir of St Magnus the Martyr, Concordia Voices and Sine Nomine Singers, and has also guest conducted Forest Philharmonic and Surrey Brass. He works as a singer with groups such as The Sixteen and the choir of Westminster Abbey.

Rebecca Pitt started her career at Dewynters, working on designs for West End advertising. She then worked as

an art director at an advertising agency in Dublin, creating ads for car companies,restaurants and fashion

lines. She then started up her own company and has been happily designing posters for theatre projects all over

Kate Smith is a multi-­‐genre vocalist from the US; she earned her BA from Columbia University and is currently studying for her Masters at Guildhall School of Music and Drama. Kate recently moved from Beijing, China, where she was best known for producing and starring in interdisciplinary music theatre and cabaret.