In the sixties, an American diary author acquired notoriety for her sexually frank depictions of encounters with her lovers; among them the American writer and painter, Henry Miller. She turned out to be the daughter of the composer, Joaquin Nin; whom it later transpired was also her lover.

Featuring on-screen encounters with her former lovers (sung by Han Buhrs), Anaïs Nin explores the tangled sexual liasons of a woman who entitled her own memoirs Incest.

Genesis: Anaïs Nin is a monodrama, a musical stage play for one voice, ensemble of eight on-stage musicians without conductor, and projected film fragments. Anaïs Nin sings of her love affair with her father, the composer Joaquin Nin, whom she encounters again after 20 years’ absence, and of her lovers Rene Allendy, Antonin Artaud, and Henry Miller. They are given expressive voice, both in the film clips and on tape, by the singer Hans Burs.

Synopsis: The piece begins with Anaïs ruminating on her restlessness and feverish excitement, only hinting at what lies deeper – “Only Henry can sense the monster, because he too is possessed.” We see Anaïs Nin and Antonin Artaud taking a romantic walk. She sings of her “night of ecstasy” with him. We see a film of someone giving a lecture, and we hear Rene Allendy, Nin’s psychiatrist, talking about jealousy. Anaïs sings of her affair with him, and of Artaud’s crtiticism of her behaviour. Artaud: “What have you done to Allendy? You have done him harm.”

Anaïs then sings of her renewed encounter with her father. She is interrupted by a furious Henry Miller, but continues the story of her relationship with Joaquin. After a dramatic climax, she fantasises in letter to her father about a moment of great peace in which he is sitting on his bed. Later, in the room where Henry Miller is sleeping, Anaïs sings of her loneliness and her never-ending hunger.

A 1930’s gramophone recording of Joaquin Nin’s arrangement of a Basque Christmas carol is heard from the stage. 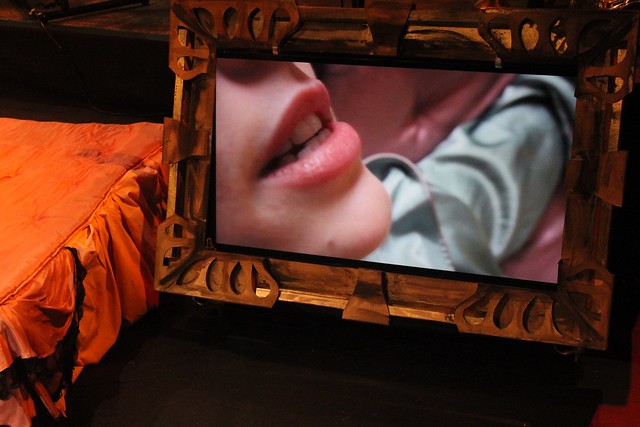 Libretto from the journals of Anaïs Nin

Louis Andriessen studied with his father and Kees van Baaren at The Hague Conservatory, and between 1962 and 1964 with Luciano Berio. Since 1974 he has combined teaching with his work as a composer and pianist. He is now widely regarded as the leading composer working in the Netherlands today and is a central figure in the international new music scene, with music commissioned or performed by San Francisco Symphony, Los Angeles Philharmonic, BBC Symphony Orchestra, Kronos Quartet, London Sinfonietta, Ensemble Modern, MusikFabrik, Icebreaker and the Bang on a Can All Stars. Andriessen recently won the 2011 Grawemeyer Award for Music Composition for his opera La Commedia. He is published by Boosey & Hawkes.

Nick Sutcliffe With an early interest in the Dutch post-minimalist school, Nick was first exposed to Andriessen’s music at the age of 15 by his composition teacher Nick Williams, himself a student of Louis, and has been gripped ever since. He is delighted to return to Tête à Tête with his band Ensemble BPM following their acclaimed performances of Steve Reich’s “Three Tales” in 2010. Nick conducts, produces and performs in a wide range of musical contexts and recently wrote music for BAFTA-nominated film “Black Pond” – the director of which shot some of the footage featured tonight.

Matthew Eberhardt has been working as a director and acting coach since graduating from Cambridge University in 2009. He has directed a number of musicals and operettas over the years, and has worked extensively as an

assistant director across a number of genres. He will be directing Footloose at Putney Arts Theatre in September and Monteverdi’s Orfeo at Upstairs at the Gatehouse in November. www.mattheweberhardt.com

Phoebe Haines trained at Cambridge University and The Royal College of Music. Her particular interest is in interpreting new works for operatic voice, so she is delighted to be working with Louis Andriessen and Ensemble BPM on Anaïs Nin. Phoebe is generously supported by The John Wates Charitable Trust, and looks forward to continuing her studies at The Guildhall this September.

Ensemble bpm would like to thank: Bill Bankes-Jones, Anna Gregg, Nell Baugh, David Salter and all at Tête à Tête for their saint-like patience and support; all of the BPM musicians and technicians who have dedicated so much time to the furtherance of this project; Paul Kilbey for his Twitter expertise, Claire Shovelton for her stunning production photographs; Polly Jackman, Claudine Murphy et al. at Boosey and Hawkes. Thank you to our sponsors: What Katie Did, Kiss Me Deadly and Computerlinks.

Lastly, thank you to Louis Andriessen for this wonderful music…