The human language is an inexhaustible reservoir of musical material in which we are immersed every day. To make music out of speech, however, we have to be able to extract musical characteristics from the flow of language. In this respect, ENCOUNTERS IN THE REPUBLIC OF HEAVEN revisits the original journey of Peri and Caccini, who tried to retrieve the clarity of speech from the complexity of Renaissance polyphony and in so doing created the earliest experiments in opera.

From 2006, as Composer-­‐in-­‐Residence in the North East, based at the University of Durham, I collected recordings of natural speech from across the region and developed software to extract the rhythm, melody (and implied harmony) and sonority of individual voices.

The sounds have been assembled into an eight-­‐channel, sonic panorama where individual stories, extended in a variety of musical ways, are embedded in the “orchestrated” community of speaking voices, encircling the listener. 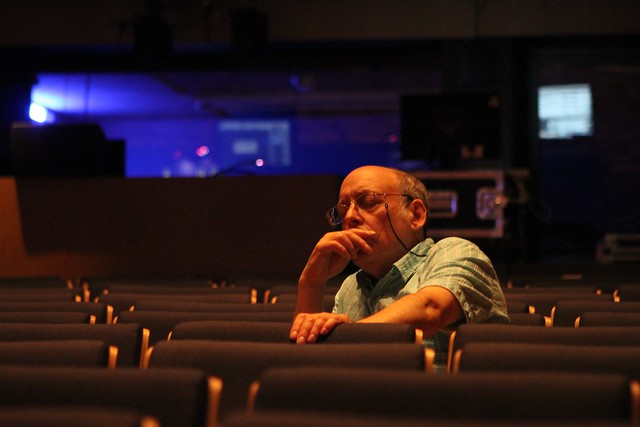 Trevor Wishart is a composer and vocal-­‐performer. He specialises in sound metamorphosis, both in live performance and imaginary worlds created in the sound studio, using his own software. Well-­‐known works include: Red Bird, Tongues Of Fire, Two Women and Globalalia. His work has been commissioned by IRCAM, the Paris Biennale, the Massachussets Council for the Arts and Humanities, the DAAD (Berlin), the French Ministry of Culture and the BBC Proms. His approach has been described in the following publications: On Sonic Art, Audible Design and Sound Composition – all of which he has written himself. He was recently awarded the Giga-­‐Herz Grand Prize for his life’s work.